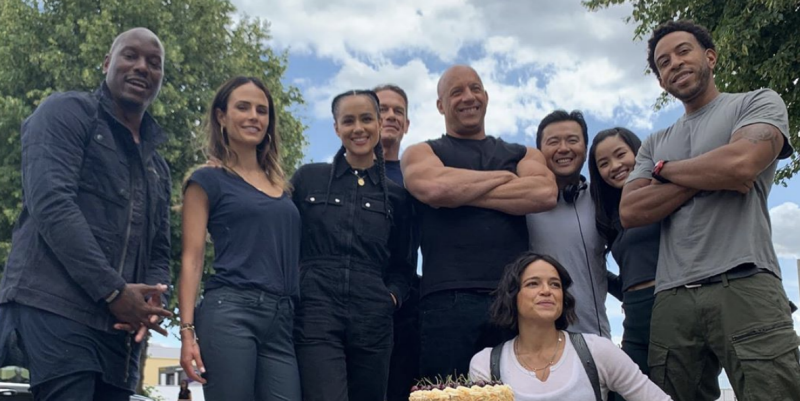 That’s a wrap! Director Justin Lin has confirmed that filming has officially wrapped on Fast & Furious 9. Filming kicked off over the summer on the upcoming instalment of the long-running and highly-successful, not to mention quite unlikely, franchise.

Vin Diesel is returning as Dom Toretto to lead his Fast Family once again in what is poised to be another wild, globetrotting adventure.

Justin Lin, who helmed four previous entries in the franchise, returned to the director’s chair after taking a break for Furious 7 and The Fate of the Furious. Taking to Twitter, Lin revealed over the weekend that filming has concluded on the ninth instalment in the series.

Lin shared a photo of the camera, with some of the crew in the background which, unfortunately, didn’t reveal much, if anything, about what’s coming our way next year. Lin did, however, in his caption, promise that this is quite the ambitious chapter in the Fast and Furious saga for Dom and the gang. Here’s what he had to say about it.

It’s an official #F9 Wrap! This is by far the most ambitious film of the series and I am forever grateful to our amazing crew from London, Edinburgh, Tbilisi (Georgia), Phuket & Krabi (Thailand), and Los Angeles. pic.twitter.com/ggFGxwHuz7

“It’s an official #F9 Wrap! This is by far the most ambitious film of the series and I am forever grateful to our amazing crew from London, Edinburgh, Tbilisi (Georgia), Phuket & Krabi (Thailand), and Los Angeles.”

The Fast and the Furious, released in 2001, was a relatively straightforward heist/racing movie that, more or less, was a remake of Point Break without being positioned as such. Over the course of the next decade, the franchise evolved substantially, largely under Just Lin’s watch. Lin directed The Fast and the Furious: Tokyo Drift, Fast & Furious, Fast Five and Fast & Furious 6. Fast Five, specifically, brought Dwayne “The Rock” Johnson into the fold and is truly where the seismic shift occurred.

In that time, we’ve seen some truly ambitious stuff take place, such as the safe dragging scene in Rio from Fast Five or the car drop/parachute scene from Furious 7. So to call this the most ambitious entry to date is a bold claim. The cast is truly stacked this time around.

Aside from Vin Diesel, we’ve also got Michelle Rodriguez, Jordana Brewster, Ludacris, Tyrese Gibson, Helen Mirren, John Cena, Michael Rooker and UFC star Francis Ngannou. Plus, Charlize Theron returns as Cipher and, to top it off, rapper Cardi B and Latin pop star Ozuna were brought in late in as late additions.