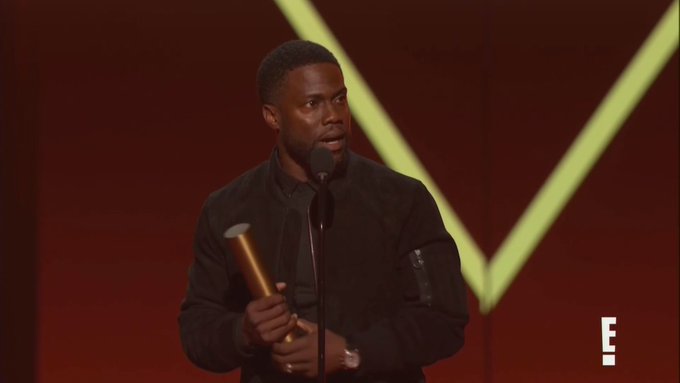 On Sunday night, Kevin Hart made an appearance at the People’s Choice Awards, thus marking his first major public appearance since he was hospitalized after a bad car crash a little over two months ago.

At the award show, Hart was presented with a trophy for “Comedy Act of 2019” by Robert Downey Jr. Kevin Hart was given a standing ovation when he went up to go for his award.

See Also: The Kardashians, Beyoncé And Other Winners At The 2019 E! People’s Choice Awards

In a touching speech he said

In addition to thanking his family and the award show, he also sent some appreciation to his fans.

“You have no idea the effect that you have on us as entertainers,” he said. “I truly want to thank you guys for being there for me in this difficult time.

It takes a lot of ❤ to win #TheComedyAct of 2019, so it makes sense that @KevinHart4Real would take home the 🏆

Congratulations on your win! #PCAs pic.twitter.com/I7udeWVSaA

The entertainer has kept a low public profile since suffering a major back injury after the Plymouth Barracuda he was in (which was also his) went off-road and down an embankment shortly after midnight on September 1.

The day before Halloween, Hart started Tweeting again following a two-month hiatus from the platform. And around that same time, he also started using his Instagram account via this video about the accident: