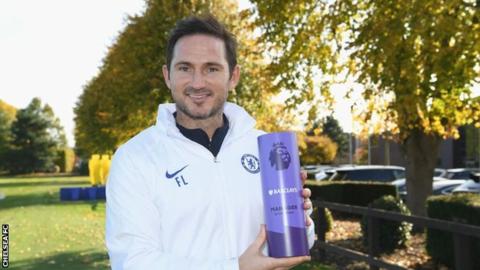 Former Derby boss Lampard took charge at Stamford Bridge in the summer and his side has recovered from losing his opening game 4-0 at Manchester United to sit fourth in the table.

“I do believe in the group,” he said.

“I also understand how hard the Premier League is and the competition from teams like Liverpool and Manchester City.”

He took over a side which was subject to a two-window transfer ban and cannot sign new players until summer 2020, leading to more opportunities for the likes of midfielder Mason Mount, 20, and defender Fikayo Tomori, 21, both of whom have gone on to win England call-ups.

“Winning an individual award like this, my first one at the club, is the perfect time to appreciate the close staff, who have worked so hard since pre-season, and the players, as they are the ones who go out and perform,” added 41-year-old Englishman Lampard.

“I am delighted for everybody.”