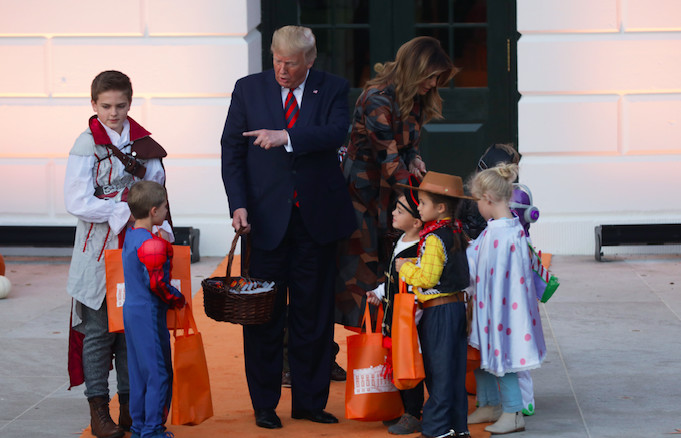 According to Yahoo! News, the event was held on Oct. 25 at the Eisenhower Executive Office Building, where families of executive branch employees celebrated the spooky holiday. But it seems there was at least one element of the party that sparked horror among the adults: a “Build the Wall” station for the kiddos.

“Horrified. We were horrified,” an attendee told the outlet.

Children who attended the event were reportedly asked to write their names on a red paper brick, which was subsequently taped to a hallway wall to symbolize Donald Trump’s border proposal. As you can see in the photos below, the station featured POTUS’ infamous campaign phrase “Build the Wall” as well as construction vests and signs that read “America First.

Photos shared on social media indicated Vice President Mike Pence was inside the building during the party, but his spokesperson told Yahoo! he did not go beyond his second-floor office.

“Our ceremonial office had a plane display. We had kids build their own paper aeroplanes and fly them. That’s what the VP came to. He came to our ceremonial office,” the spokesperson told AOL before being asked about the wall activity. “… I’m not aware of it.”

The White House did not respond to various outlets’ request for comment.