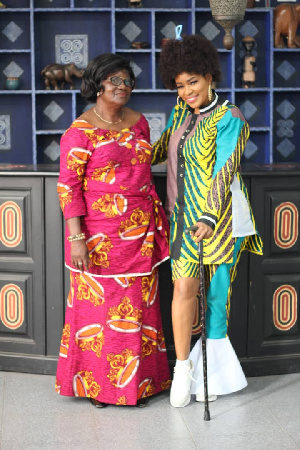 October 29, 2019, marked exactly 16-years Ghanaian musician Terry Bonchaka, born Terry Nii Okang Mensah Adjetey passed away, as such his family led by his mother, Mrs Charlotte Adjetey and sister, Shatana recounted the memories of his life from the studios of TV Africa in Accra.

Speaking in an interview with Larry Bozzlz on TV Africa, songstress Shatana who is poised at upholding the legacy left behind by her late brother indicated that “it’s been long ever since Terry physically left this world yet it feels like he is always with us at home, I always feel his presence, I could tell his spirit is in pain, I really wish he could say something, the family believe he was murdered therefore I am daring all those who were with Terry prior to his performance on that fateful day which he passed away to come for me to touch them with my bare hands and I know the truth will be revealed”.

Shatana insisted that Terry Bonchaka was murdered with what could be screwdriver as she had noticed a hole in his neck when examining his body.

She backed her theory by adding that his body showed no sign of bruises or injuries that come with car accident victims and the story from his team about the accident did not add up.

See Also: Here Are All The Songs Released By Ebony

“I know it sounds weird but trust me Terry’s spirit lives in my hands, I was the only one who was allowed to examine Terry’s body with my bare hands when he passed away at the 37 Military Hospital, I usually feel some power in my hands and I know for sure that when I touch such persons with my hands something will definitely happen”.

Terry Bonchaka died on October 29, 2003, in a car accident while returning from a show at the University of Ghana.

Bonchaka, 21, died on the Legon-Madina road when the vehicle in which he was riding with a friend after performing at the Akuafo Hall Celebration, suddenly veered off the road and hit a tree.

He got his big break in the Miss Ghana Hiplife Amateur Competition and went on to win the regional competition before taking home the title of Hiplife Champion 2001 in the final round.

See Also: Top 7 Ghanaian Artistes Who Bring Too Much Energy On Stage

Bonchaka stood out for his unique voice, his dress sense and a dance routine which saw him lift one leg in his palm anytime he performed.

During his days on earth, he captivated Ghanaian music lovers with his songs including; ‘Puulele,’ ‘Zoozey,’ ‘Ghana Ladies,’ ‘I’m Aware,’ Ghana Ladies’ and ‘Asem Ben Ni’.