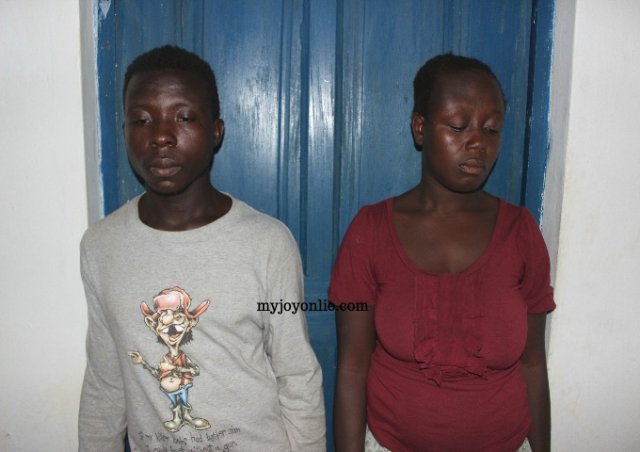 Two love birds; Beatrice Naa Korley, 22, who is unemployed and John Kyei Baffour 19, a mechanic apprentice, have appeared before the Ashaiman District Circuit Court for attempting to snatch an Uber Car.

Prosecuting, Chief Inspector Nunoo Mensah of the Ashaiman Divisional Police Command, told the court that the two accused persons are residents of Riss junction, Madina in the Greater Accra Region and on the 10th of October 2019 hired the services of the complainant Mr Micheal Normenyo, an Uber Driver, using a Kia Picanto with the registration number GS 950-19.

According to the Prosecution, the accused person hired the services of the Uber Driver from the forecourt of the Dodowa Traditional Council to their destination.

Chief Inspector Mensah revealed that the first accused Beatrice Naa Korley sat on the front passenger’s seat with a knife concealed on her whilst her lover the second accused, sat directly behind the driver.

He stated that upon reaching a location at about 12:30 am, the second accused ordered the driver to stop after which he tried to strangle the driver with a nylon rope whilst the first accused stabbed the driver repeatedly.

According to the prosecutor, the second accused ordered his lover to pass on the knife to him since she was not stabbing the complaint hard enough.

He stated that the complainant intercepted the knife during the change over process, a situation he explained, compelled the two love birds to flee and seek refuge with some residents with the pretence that they were rather attacked.

The prosecutor said the complainant followed them and with the help of the landlord whose house the two accused tried to seek refuge, apprehended them and handed them over to the police because their narrative to the landlord did not add up, after which the complaint who looked very weak pointed at them as his attackers.

The Chief Inspector noted that the complainant was rushed to the Dodowa District Hospital where he was responding to treatment.

The accused lovers admitted to committing the crime and put before a court.

The Ashaiman District circuit court presided over by Mr Gabriel Mate-Teye remanded them into police custody.

He noted that attempting to rob was an offence contrary to sections 23 and 18(1) of the criminal offence act.