This afternoon, the University of Ghana, Legon released a statement declaring that Dr Ransford Gyampo and Dr Paul Butakor have been suspended.

Their suspension comes after the two lecturers were implicated in BBC Africa Eye’s Sex For Grades report.

The university, in a statement, said the two lecturers have been suspended because the institution is launching an internal investigation into the matter.

“In line with university regulations, the two will be invited by the Anti-Sexual Harassment Committee in the next few days to assist with further investigations into the BBC documentary,” the University of Ghana statement read.

This part of the statement has got people asking questions as to whether this investigation will be unbiased and fair.

Already, the Chair of the University’s Anti-Sexual Harassment Committee, which has been tasked to investigate the issue has gone on record saying that she didn’t believe the BBC report had enough evidence of Sex for Grades as reported.

According to the chair of the committee, Dr Margaret Amoakohene, even though the university frowns on the conduct of the two lecturers captured in the investigative piece, the evidence does not point to the allegation.

“Per the analysis on the video, there’s no direct correlation between lecturers conduct and the allegations made by the video. The evidence does not point to sex for grade. When we talk of sex for grade, we didn’t see much involvement of the lecturers of the University of Ghana,” she told Francis Abban on the Morning Starr Tuesday.

With her position stated on the record, people are asking whether the internal investigation will be thorough and unbiased.

Already, people are casting doubt on the authenticity of any report the committee headed by Dr Amoakohene will produce.

They are going to face the committee headed by that woman who said nonsense on radio today ??😂😂😂😂😂 foolish case in the making !!!! https://t.co/l1ydPGehLp

However, the University of Ghana has said it will not protect any employee or student who is found guilty of sexual harassment.

See Also: The University Of Ghana Says It Will Not Protect Anyone Found Guilty Of Sexual Harassment

“We would like to state emphatically that the University of Ghana does not and will not shield any employee or student found to have engaged in sexual harassment or misconduct. No member of the university is considered above the law,” the statement said.

See below for the University of Ghana’s statement on the suspension of Dr Gyampo and Dr Butakor: 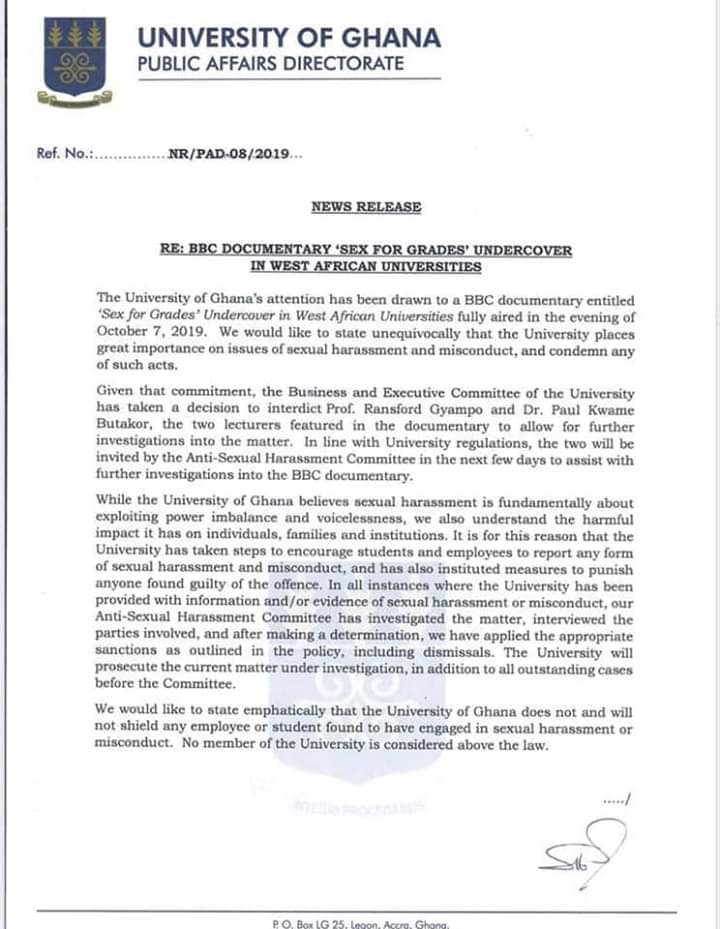 Man Jailed For Impersonating The Finance Minister On Social Media

Man Jailed For Impersonating The Finance Minister On Social Media