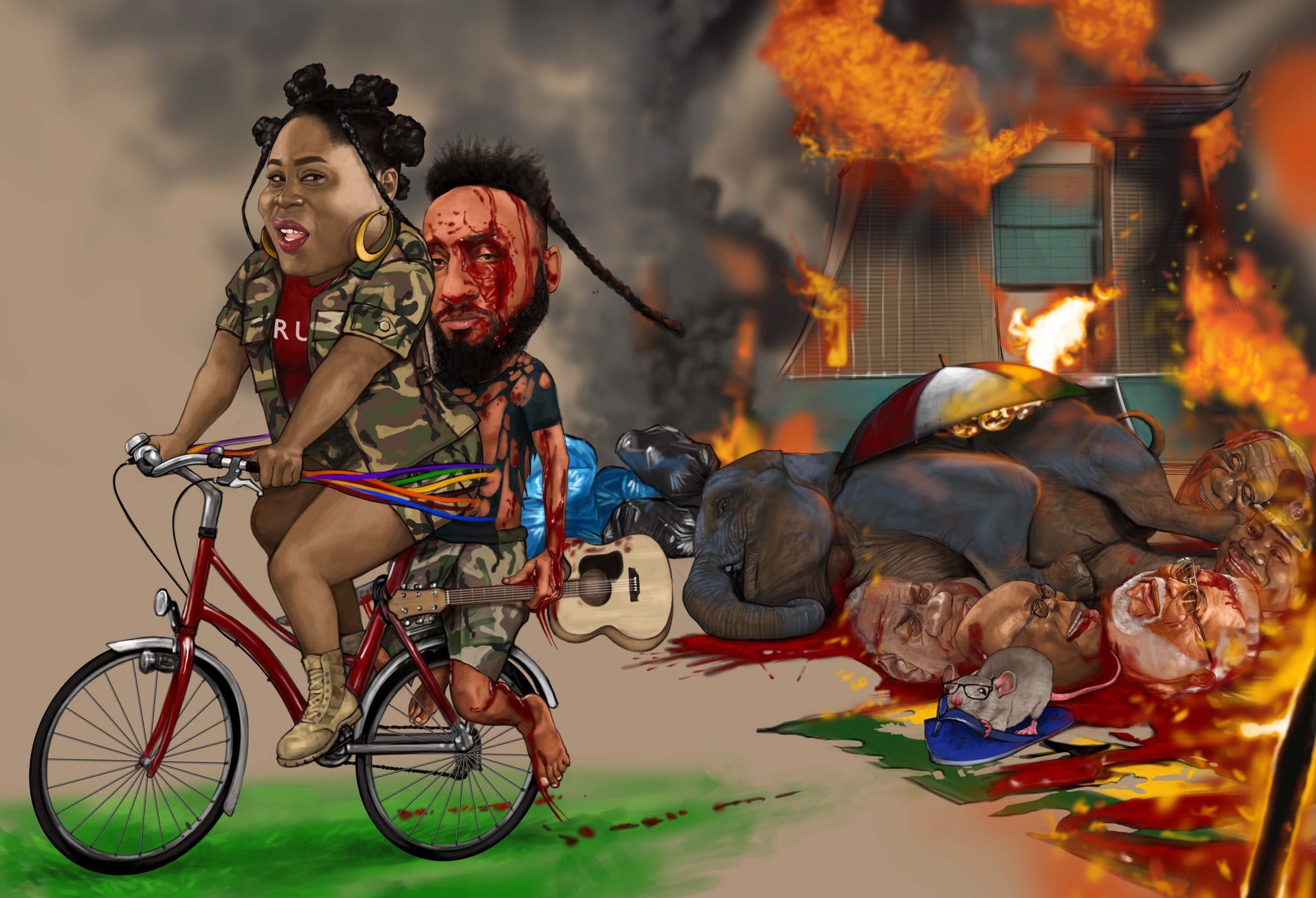 Wanlov is known for his unique approach to music and it’s refreshing especially in a country where we only appreciate one type of music.

Yesterday, Wanlov gave us an album, ‘Red Card – Minstrel Cycle’ and no matter how much of a “comedian” you might think he is, this album is what the country needs.

Every single song has a role to play.

19 tracks, each with very important messages to different factions in the country and so many issues that are plaguing the Ghanaian and the society.

Even the album art sends a strong message! It shows a fed up Wanlov being driven away on a bicycle by (That is Lydia Forson right?) and behind him is what looks like damage he caused: Dead Heads of State, both past and present.

Every song has that Wanlov uniqueness to it and is as entertaining as it makes you think deeply. He’s got different genres on it too…from afrobeats to rock to reggae to rap…everything with him even doing his rendition of Childish Gambino‘s “This Is America” but with an extra twist that makes you think “This guy is a music genius”.

On some songs he was sombre and quite serious, on some, he attacked the message and some, he addressed serious issues with the wittiest and funniest choice of words.

Anyone who listens to the album will definitely love the style and the message but…if you don’t like it, then it probably means he said some things that hit you so hard you started looking around guiltily.

He attacked the Ghanaian government, exposed their thousand and one faults and called them out for all their sneaky corrupt activities in several songs. He also had a few words for artistes and the broken music industry in Ghana and how every one of them is basically watering down their style to follow the one route everyone is walking because “it works”.

He addressed issues of feminism and childcare and certain cultural practices that are at a disadvantage to the female child using soundbites of actual people talking about poverty, their inability to get an education, the Government doing NOTHING that doesn’t favour them to bring out some kind of awakening to the songs that these are real issues and not some fiction for an album.

Pastors did not escape Wanlov’s probing eyes. They got their share with Wanlov highlighting some issues that had big and popular pastors involved and blatantly calling them thieves, manipulating Ghanaians with their message of the gospel and doing a lot of name dropping. A lot of churches and in fact, Christians on a whole will not be amused by some of the songs at all.

The whole album is eyeopening and should wake some sort of awareness in all Ghanaians instead of backlash.

Get the album on all streaming platforms: Red Card: The Minstrel Cycle

And listen on Soundcloud here:

Cooper Hefner: 28-Year-Old Son Of Playboy Founder Is Standing For Election In America

Once Upon A Time, Eazzy Owned The Airwaves With These Songs