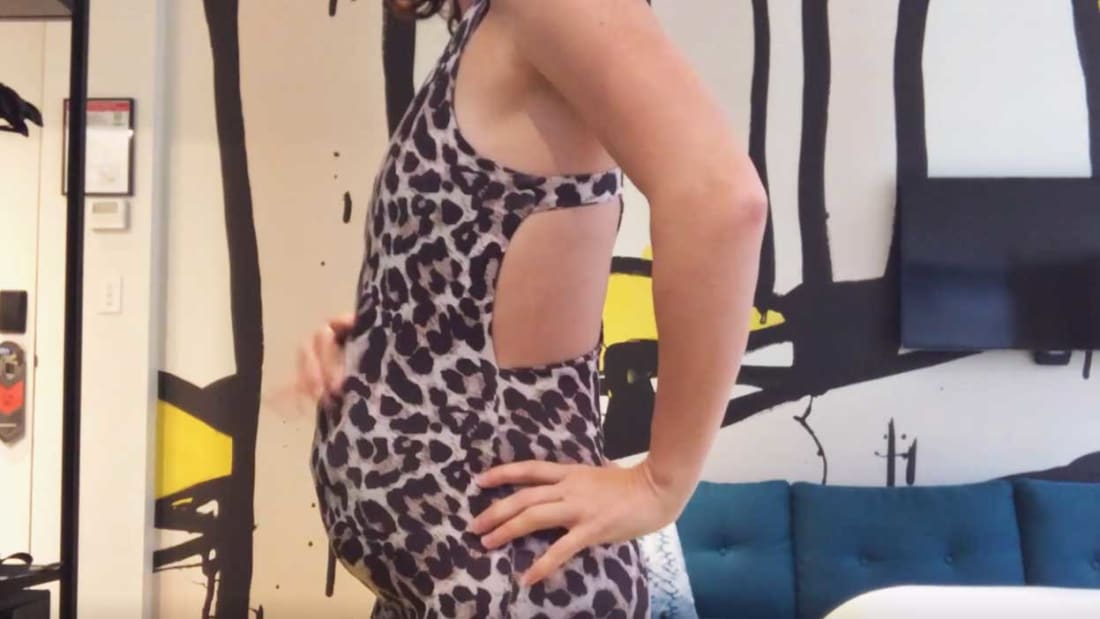 Many travellers get creative with packing, whether it’s sitting on your suitcase to try and get it to shut, or arriving at the airport wearing three coats.

But travel journalist Rebecca Andrews took packing hacks to a whole other level when she created a fake pregnancy bump out of the clothes and laptop charger that she couldn’t fit in her bag — all in an attempt to avoid paying excess baggage fees for overweight luggage.

“I have a small frame and decided to pretend to be preggo was the most believable route to a successful hack,” Andrews tells CNN Travel.

See Also: Davido Arrests The Two Ladies Who Wrongfully Accused Him Of Impregnating One Of Them

“But in all seriousness, I think it is the laziest idea I have ever had — a woman’s body can create human life, so exploiting this unique ability we have to save myself $60 was just obvious. It’s quite an uncreative hack.”

Before boarding her domestic Australian flight with Jetstar, Andrews also slid her laptop down the back of her stretchy jumpsuit. She’d already gone through security, so she thought it was a safe bet.

She put several layers on over the top.

It was the laptop that gave the game away — an air steward noticed it sticking out of Andrews jacket, and she had to cough up the $60 for an overweight carry-on after all.

“Was I embarrassed? Not at all,” says Andrews. “I felt like a badass. A hot pregnant badass.”

It wasn’t Andrews first rodeo. A frequent flier, Andrews tells CNN Travel she’s “double- and triple-layered clothes many times and have done a fake pregnancy here and there.”

This was her first time incorporating the laptop into the facade, though.

Andrews refuses to feel guilty about her subterfuge.

“I think a woman has the right to do whatever she wants with her body, including faking a pregnancy made out of laptop wires,” she says.

Her only regret was that she confessed: “I should have had a back-up story in case I was busted.”

Since she posted about the experience on Instagram, Andrews has been contacted by people across the world.

There have been various similar stories circulated online in the past — including, the Daily Mail reported, James McElvar, a boyband member who reportedly passed out from heat exhaustion from wearing every layer.

So maybe you’re better off just checking in your luggage, and avoiding the elaborate evasion.