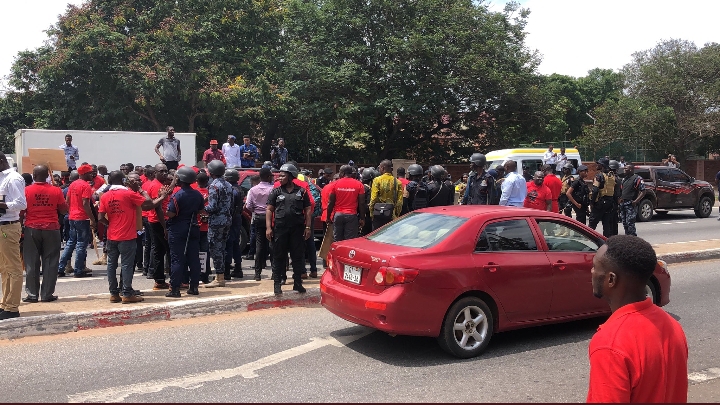 A former SRC President of the Ghana School of Law and a leader of Monday’s demonstration, Emmanuel Kobby Amoah, challenged the Police Service to provide evidence of provocation that led to its use of force.

He insisted to Citi News that the police action was unprovoked.

“If they have any shred of evidence that even one student threw a stone or any offensive weapon against the police they should bring it.”

“No student, and I repeat, no student pelted stones or any offensive weapons at the police and we in no way provoked the police. The actions of the police were uncalled for and they were not provoked in any way.”

See Also: Here’s A Detailed Account Of What Transpired Between The Police And The Law Students During The Demo

The students who were on a peaceful demonstration en route to the Presidency with a petition for the reform of legal education in Ghana were met with water cannons and rubber bullets by the personnel from the Accra Regional Police Command.

According to Mr Amoah, “the Police had already blocked the road. There were four water cannon armoured cars, police with tear gas, police holding canes, rubber bullets etc” when they got to the Ako Adjei interchange.

The students resisted police instructions to return saying they were “exercising their constitutional rights”.

And when reason failed the police sprayed the water cannon, tear gas and rubber bullets on the students.

Thirteen students were arrested but later released while many others sustained injuries from the water, tear gas and the rubber bullets.

The New Patriotic Party, National Youth Authority and the National Association of Law Students have all condemned the attacks and called for investigations.

About 48 hours after the incident, the police are yet to announce any investigations.