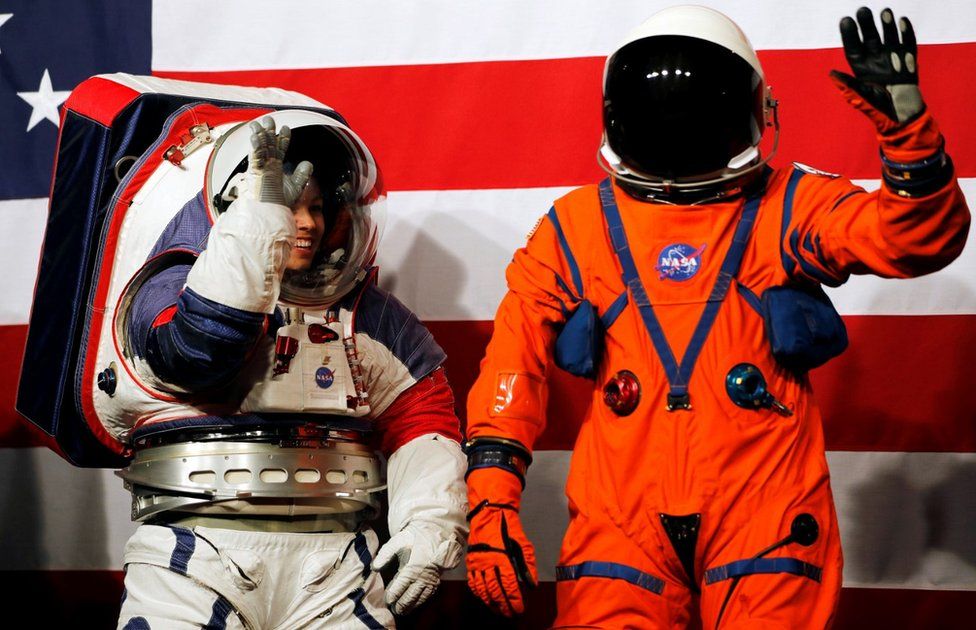 The US space agency has unveiled the prototype for a new spacesuit that could be worn by the next astronauts on the Moon.

The xEMU prototype suit looks similar to ones used at the International Space Station.

But Nasa said it had been improved for comfort, fit and mobility on the Moon.

Mr Bridenstine also presented the Orion Crew Survival System, an orange flight suit with a helmet that will be worn by crews in the Orion spacecraft for launch and re-entry.

Orion is the replacement for the space shuttle, but, unlike that system, it’s designed to carry astronauts to the Moon and other targets in deep space.

The new Moon suit, which is known formally as the Exploration Extravehicular Mobility Unit (xEMU), is designed to give the wearer a customised fit whatever their size.

See Also: University Of Energy And Natural Resources Partners With National Oceanic Atmospheric Administration In The U.S. To Launch Satellite Into Space

That would be a significant shift from the current situation. In March, the first all-female spacewalk on the ISS had to be called off because there wasn’t an available suit in the correct size for Nasa astronaut Anne McClain.

In an event at Nasa headquarters in Washington DC, the red, white and blue xEMU suit was worn onstage by spacecraft engineer Kristine Davis, from Johnson Space Center (JSC) in Houston.

“To be clear, Kristine is wearing a suit that will fit all of our astronauts when we go to the Moon,” Mr Bridenstine told the audience.

Spacecraft engineer Amy Ross said the new suit would give astronauts more mobility in the shoulders, including the ability to reach overhead – which Apollo-era suits weren’t capable of.

A large piece called a bearing provides the astronaut with a greater range of movement at the waist. There are three further bearings on the legs along with a flexion-extension joint at the waist to provide more mobility in the lower part of the suit.

Ms Davis demonstrated the suit’s capabilities by moving her arms in a circular motion, performing squats and bending down to pick up a rock from the stage.

“The mobility is one of the biggest things,” said Nasa astronaut Kate Rubins. “If you need to pick up a rock, if you’re examining something, if you’re planting a scientific instrument, you need that upper torso mobility.”

Amy Ross said seals in the bearings would help protect the suit from the abrasive lunar dust that managed to stick to surfaces and worked its way into every nook and cranny during the Apollo missions. The suit also has fewer seams and will use new materials that keep the dust out.

The suit has a 100% oxygen environment and should help astronauts get to work right away rather than having to spend time “pre-breathing” to purge nitrogen from their bodies. The suit’s life support system should give the astronaut around eight hours’ worth of air, with an extra hour for contingency.

The Orion Crew Survival System was demonstrated by Dustin Gohmert, a project manager at JSC.

The primary purpose of the suit is to protect astronauts against an accidental depressurisation, where the air pressure is lost from the inside of the spacecraft while it is travelling in a vacuum or near-vacuum.

Mr Gohmert explained: “We can take safe haven in this suit, we’ll seek refuge in here, we’ll keep the body at 8 psi (pound-force per square inch) for a certain period of time, then we’ll drop down to 4.3 psi and we can remain there for six days.”

“That’s no small feat to be able to live in a volume that’s only a couple of inches bigger than your body for six whole days.”

Mr Bridenstine followed up: “This is, when necessary, a spacecraft.”

VIDEO: FDA Proves That Locally Produced Masks Can Protect Against Spread Of COVID-19

Pilot Sedode - July 11, 2020 0
Rumoured Liverpool and Manchester City target Kalidou Koulibaly has played down rumours of a summer move away from Napoli. Koulibaly has been a solid...