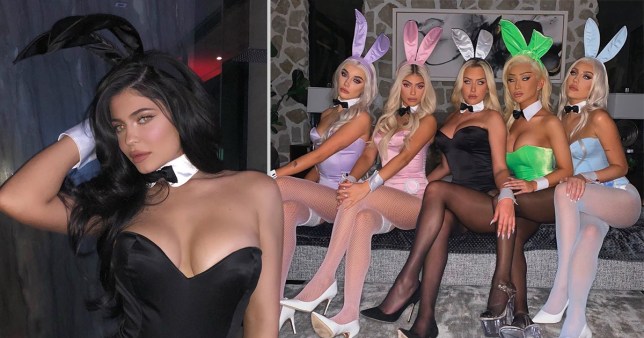 The make-up mogul, 22, donned a sexy Playboy bunny outfit to attend her best mate, Anastasia Karanikolaou’s Playboy party this week – but she was joined by at least five clones of her at the same do. Stassie shared images of some of the partygoers, including a line up for five bunnies, who all pretty much could be Kylie at first glance. Even more mind-blowing is the fact that Kylie herself isn’t even in the picture. Not one of these five are the real Kylie Jenner.

In fact, the people in the picture are her pals, Olivia O’Brien in the purple, a pal called Kelsey in the pink, Stassie in black, Nikita Dragun in green and Sydney Carlson in the blue. Kylie joined Stassie in wearing the classic black outfit, and the pair shared photos of the two of them together on Instagram too.

It was Alyssa Vingan Klein, a NYLON magazine editor, who first spotted that all of Kylie’s besties were basically morphing into her, tweeting: ‘When did all of K*lie J*nner’s friends become her clones?’

Also in attendance at the party was Paris Hilton, who decided not to be a bunny and went for a sailor outfit instead. No, we’re not sure what that has to do with Playboy either…

The party was hosted by Stassie and Kelsey, who even posed for a mock Playboy cover as the invite for their guests. Kylie went the whole hog in the classic corseted black strapless bodysuit with black tights, bunny ears and white collar and cuffs.