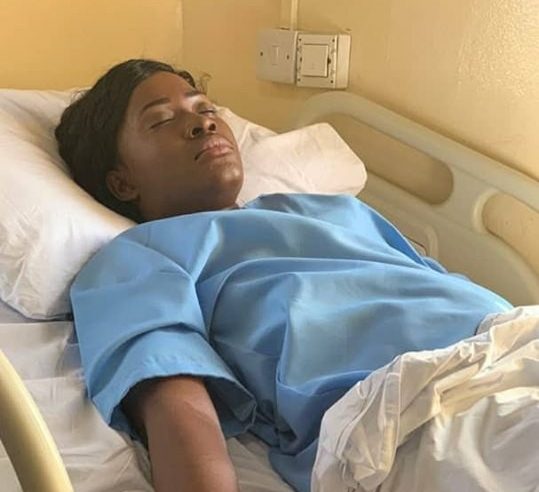 A photo is circulating on social media that shows Fella Makafui laying in a hospital bed with an IV Catheter attached to her arm.

According to Yen.com,  reports making rounds on social media claim Fella could be suffering from depression. Some also think the actress is facing issues in her relationship with her boyfriend Medikal which is probably why she is in that current state.

Fella Makafui recently deleted all her Instagram posts but some hours later, she brought back photos of just her and Medikal bursting rumours that there might be trouble in paradise.

See Also: Every Reason Why Medikal And Fella Makafui Are Couple Goals

Now the speculations about Fella Makafui being sick is hard to believe especially as she has been handcuffed to the bed. This is something that is usually only done to criminals who need medical attention (Or Medikal attention in her case then…that will make sense).

But seriously, all jokes aside, Fella Makafui is an actress and people seem to forget that. Actresses are always playing some role or the other and this wouldn’t be the first time a photo has been leaked from a movie set with people thinking it is real life.

It may even be part of a publicity stunt for a movie.

Whatever it is, we are looking forward to hearing what the real story is.