Kuulpeeps – Ghana Campus News and Lifestyle Site by Students
Home News Here Are The Reactions Of Some Fans Of Kofi Kingston After His...
Facebook
Twitter
WhatsApp 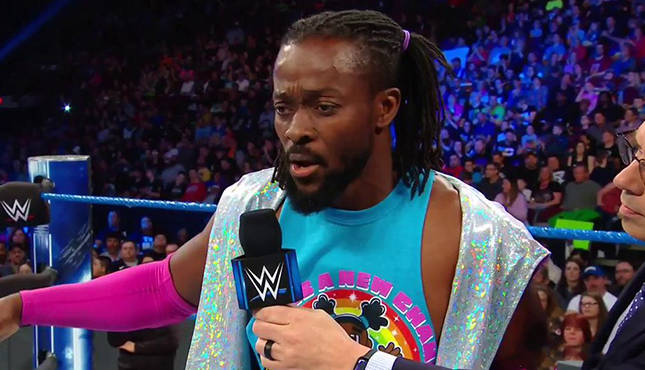 Fans of Kofi Kingston are not happy after the New Day member lost the WWE title to Brock Lesnar in 9 seconds.

Yes, Kofi Kingston was pinned in 9 SECONDS by Brock Lesnar after being hit with a single F-5.

After the fight, fans of Kofi Kingston went on Twitter to express how they felt about the wrestler’s defeat and WWE title loss.

Kofi Kingston became the first African-born WWE Champion after he defeated Daniel Byran at Wrestlemania 35. He successfully defended the WWE title against the likes of Kevin Owens, Samoa Joe and Randy Orton until his defeat against Lesnar.

Here are some reactions from the fans of Kofi Kingston:

I really feel for Kofi. Match was over before they got the ad copy off the screen. #SmackDown pic.twitter.com/56DRCmBTb8

Everybody when they did Kofi Kingston dirty #WWE #SmackDown pic.twitter.com/GTU1dmwgIJ

They couldn’t even give Kofi Kingston some damn offense. Come on! After the run he had. I get Brock Lesnar winning the #WWE championship. But like that? #SmackDown

MONTHS OF HAVING THAT TITLE AND IT’S GONE IN 5 SECONDS. My dude Kofi was robbed 👿 #SmackDown

They gave kofi 1 of the best wwe title runs in recent memory to get squash in 5 seconds come on vince wtf was that pic.twitter.com/XHYVxrIWge

We hope he gets he rematch soon!