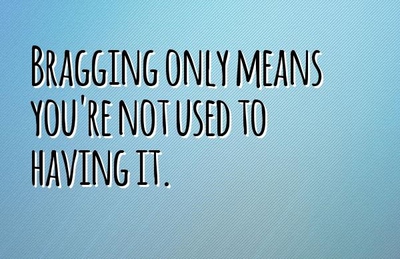 No one likes a braggart – not even other braggarts!

Isn’t it interesting how that doesn’t seem to stop them from regaling you with tales about their perfect life, intelligence, accomplishments, travel, and whatever else they feel the need to share in their game of one-upmanship?

Their perceived personal superiority seems to end where the line of self-awareness and examination begins. It seems like they can’t see their behaviour that pretty much no one sees as positive.

Why is that? Why do people brag and how do you deal with it?

Why Do People Brag?

It’s only normal to want to share accomplishments with our friends and peers.

Maybe you completed that project you have been working hard on for a long time, finally took that trip that you were looking forward to, or got that prestigious job you had been hoping for. The desire to share that good news and celebrate it with the people around us is a natural and healthy one.

It becomes unhealthy when we use our accomplishments to elevate ourselves at the expense of other people or their fortune. Bragging is often used as a defence mechanism – a shield to be held up and used to protect our weaknesses and fears. The braggart may be focused on demonstrating to their peers, friends, family, or strangers that they are, in fact, good enough and worthy.

That type of insecurity often comes from a deep place that is formed by one’s life experiences, successes, and failures. It can even start as early as childhood if the person’s parents force them to earn their love by being good enough.

Things, like withholding affection for bad grades or not cleaning up appropriately, can foster the attention-seeking behaviour and validation that people who brag are looking for.

It’s not always about insecurity though. Sometimes, people just like to feel superior to those around them. That perceived superiority makes them feel powerful or that they are better than this mere rabble that they deign to co-mingle with. That attention-seeking and validating behaviour isn’t always verbal. Sometimes it’s non-verbal or even secondary bragging.

Non-verbal bragging is putting something forward in an obvious way for people to notice, where the braggart hopes to nudge the other person into asking about it.

That could be things like wearing expensive designer clothes and accessories, constantly pointing out an expensive new purchase like a car or electronics, or decorating their office desk with all of the souvenirs they bought on their tropical vacation.

These are physical indicators meant to capture interest and prompt the person to ask about them, to effectively give the braggart social permission to blow their own trumpet. You asked about it, after all!

Secondary bragging is bragging done through a third-party. That can be a husband that boasts about how much money his wife makes or a parent that brags about their child’s intelligence or accomplishments.

None of these things is bad in small doses. It’s when they are used as a means to elevate oneself at the expense of other people that it starts to creep into bragging territory.

The interesting part about bragging is that even nice, friendly people can fall into these patterns if they happen to have those underlying insecurities. That tends to make them feel worse, because they do realize that they aren’t being fair or kind to the people around them, but they may not be able to help themselves.

Their bragging may be masquerading as life advice with good intentions, rather than something overly mean or unkind.

How To Deal With People Who Brag

Navigating a braggart in a social situation can be a bit tricky. You risk coming off as a jerk if other people are taken in by their narrative.

That isn’t necessarily a bad thing, but do be aware that there can be repercussions if you decide to push back against them.

You can change the subject or even deny the braggart the validation he/she seeks which could cause them to seek it elsewhere and you can achieve this by remaining unimpressed with whatever they are boasting about.

You can also try and confront the person about their bragging and if you choose this, try to do it privately. Ask the person if they realize they are coming off as bragging and let them know how off-putting it is to try to talk to them about whatever the thing is.

There are some situations where it’s advised to give them what they want so they stop. For example; you don’t want to upset your boss if they happen to like to brag about a thing they have or something they accomplished. Sometimes it’s worthwhile to just agree with the other person so they can get it out of their system and move on to other things.

The last thing we advise is to be able to accept the person for who they are.  You may take a hard or soft approach with a braggart and find that the person is just not interested in listening or changing. Pressing that person isn’t likely to lead to any meaningful revelations or changes. Sometimes it’s better to just stay silent and exit a situation with grace so that person can live their own lives and find their way.

Bragging can be annoying to listen to and deal with. It’s easy to feel frustrated or get angry with someone who brags because no one wants to listen to that.

Do you know someone who brags a lot? How do you deal with them? Let us know in the comments section.