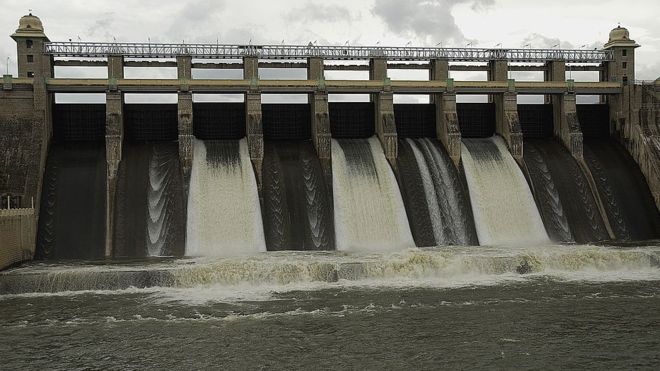 A newly married woman and three of her family members drowned in a reservoir after trying to take a selfie, said police in the southern Indian state of Tamil Nadu.

The dead were among a group of six who held hands and stood in waist-deep water near Pambar dam before one of them slipped, pulling the others.

The woman’s husband was able to save his sister but the others drowned.

India has the highest number of recorded selfie deaths in the world.

India accounted for about half of the 259 reported fatalities between 2011 and 2017, according to a study by the US National Library of Medicine. It was followed by Russia, the US and Pakistan.

In Tamil Nadu on Sunday, the young married couple, from Bargur in Krishnagiri, were visiting relatives in Uthangarai along with the bridegroom’s sister, The Hindu newspaper reported.

The three entered the water together with three teenage siblings when one of them, a boy aged 14, slipped and dragged his two sisters aged 18 and 19 with him, along with the newly married woman and the bridegroom’s sister.

The sister was pulled to safety by her brother but the other four disappeared under the water. Police said the bodies were later recovered and that post-mortem examination would be carried out.

It was the latest in a series of tragedies linked to selfies in India. Experts have warned that people are taking unnecessary risks to impress their family and friends on social media.

In Haryana state in May, three teenagers taking selfies on a railway track jumped out of the way when they saw a train approaching, only to be killed by another train coming in the other direction.

In 2017, the Indian state of Karnataka launched a campaign to warn people that “selfies can kill” after the deaths of four students.

The same year, a man died in Odisha when an elephant he was taking a selfie alongside wrapped its trunk around him and crushed him.

Julitta Gbagbo - January 19, 2020
0
A Committee of Universities Local Union Executives has threatened to embark on a series of industrial actions if government fails to swear-in...

Dangote Lists Ghana As One Of The Best Investment Destinations In...