The billionaire promised to give a group called #TeamTree enough cash to plant one million trees in 2020 and 2021. The #TeamTrees campaign started in May 2019 when the YouTuber MrBeast was challenged to plant 20 million trees.

He then teamed up with other online celebrities and the Arbor Day Foundation, a non-profit dedicated to ‘planting and caring for trees’. On Twitter, Elon responded to a tweet from Mr Beast and asked: ‘Sounds cool. Where are the trees being planted & what kind of trees?’

The YouTuber responded: ‘The trees are being planted on every continent except Antarctica and the kind of trees planted depends where they are planted.

Elon Musk has taken the throne 😍

He told Musk that species which are ‘native to their surroundings’ would be put in the ground. ‘Ok, sounds legit, will donate 1M trees,’ Musk replied before changing his username to Treelon. Saplings will be seeded across the world over the next two years. 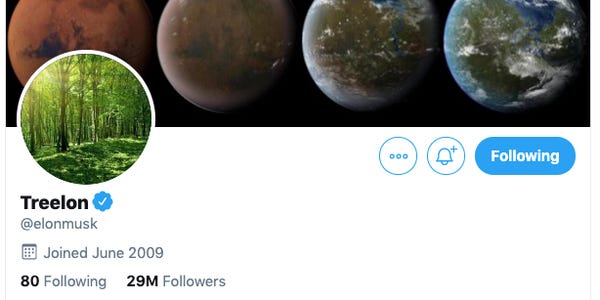 A donation of £1 will fund one tree. ‘It is vitally important to protect, manage, and restore forests globally,’ the campaign wrote in a statement. ‘We are focused on restoration because, according to the National Academy of Sciences, forest restoration has the most global climate mitigation potential compared to all other natural climate solutions.

‘Restoring lands through tree planting is the Arbor Day Foundation’s area of expertise and something they’ve been doing for nearly five decades. ‘There’s no silver bullet for fixing climate change, just silver buckshot, so we should actively pursue many different approaches including both preservation and restoration.’

Elon Musk is the top donor on the #TeamTrees leaderboard, with Twitter boss Jack Dorsey in second place after pledging to fund 150,000 trees.