Twitter Co-Founder, Jack Dorsey will visit Ghana in November as part of a four-nation tour of the continent.

He will also visit Ethiopia, Nigeria and South Africa.

Announcing on his twitter page he said he will spend the time with entrepreneurs.

Although he did not give details about his tour itinerary, he noted that he will spend the entire month of November in the four countries. 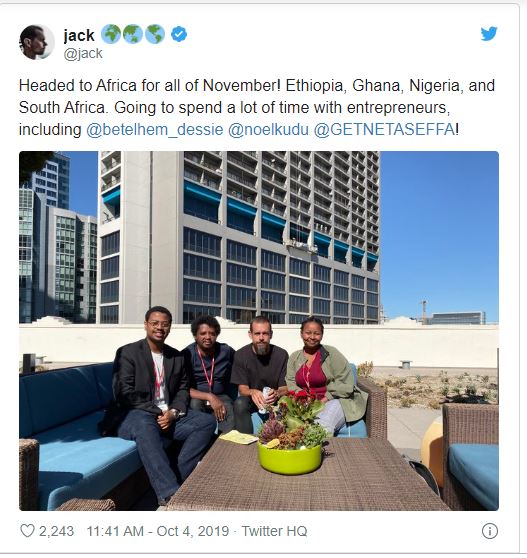 See Also: Twitter Admits That The More Followers You Have On Twitter, The Less Ads You See

This will be the first time the 42-year-old internet entrepreneur is visiting Ghana.

There are suggestions that Jack is looking to make a major investment on the continent following a similar action by the Facebook boss, Mark Zuckerberg in 2016 when he visited Nigeria and Kenya and making an over $20 million investment in Andela.

Twitter was launched in 2006 and has rapidly gained worldwide popularity.

In 2012, more than 100 million users posted 340 million tweets a day and a year after that it emerged as one of the top-ten most visited websites in the world.

In 2018, it was estimated that some 9.2 million Ghanaians are said to have access to mobile internet and a huge number of them are ardent social media users.

Internet penetration in Ghana is quite high with more new users getting connected every day.

This indicates an opportunity for internet businesses and that perhaps explains why the internet entrepreneur will consider Ghana to visit and interact with its entrepreneurs.

July 23, 2021
Fans of Kanye West were anticipating and looking forward to the release of his new album, Donda, which was scheduled for Friday, July 23,...

8 Stylish African Print Outfits We Can’t Get Enough Of