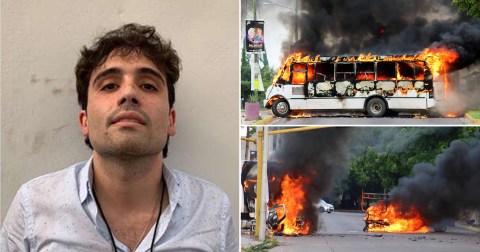 Gunfire erupted on the streets of the Mexican city of Culiacán on Thursday as word got out that authorities had captured Ovidio Guzmán López, son of El Chapo.

The city of Culiacán, home of the El Chapo’s Sinaloa cartel, was filled with the sound of sniper rifles and the sight of masked men on trucks with machine guns strapped to the back opening fire on Mexican security forces, in addition to Mexico’s newly created national guard. The gunmen also used burning vehicles as a barricade to block several city streets.

See Also: Here Are Some Of The Most Shocking Crimes Committed By Some Of Your Favourite Celebrities

According to Metro News, Sinaloa’s soccer club, Dorados announced that it had cancelled its game Thursday due to security concerns. School classes were also cancelled and currently, there is no public transportation.

Guzmán López, along with his brother Joaquin, were charged with drug trafficking in February. The two were being accused of conspiring to distribute cocaine, methamphetamine and marijuana from Mexico into the United States, and elsewhere in the world, from 2008 to 2018. The López brothers were fugitives at the time and were believed to be in Mexico.

In the absence of his father, Ovidio attempted to gain control of the Sinaloa cartel but faced pushback from their co-founder Ismael “El Mayo” Zambada, who reportedly sought to push them out.

Their father was sentenced to life in prison in July.