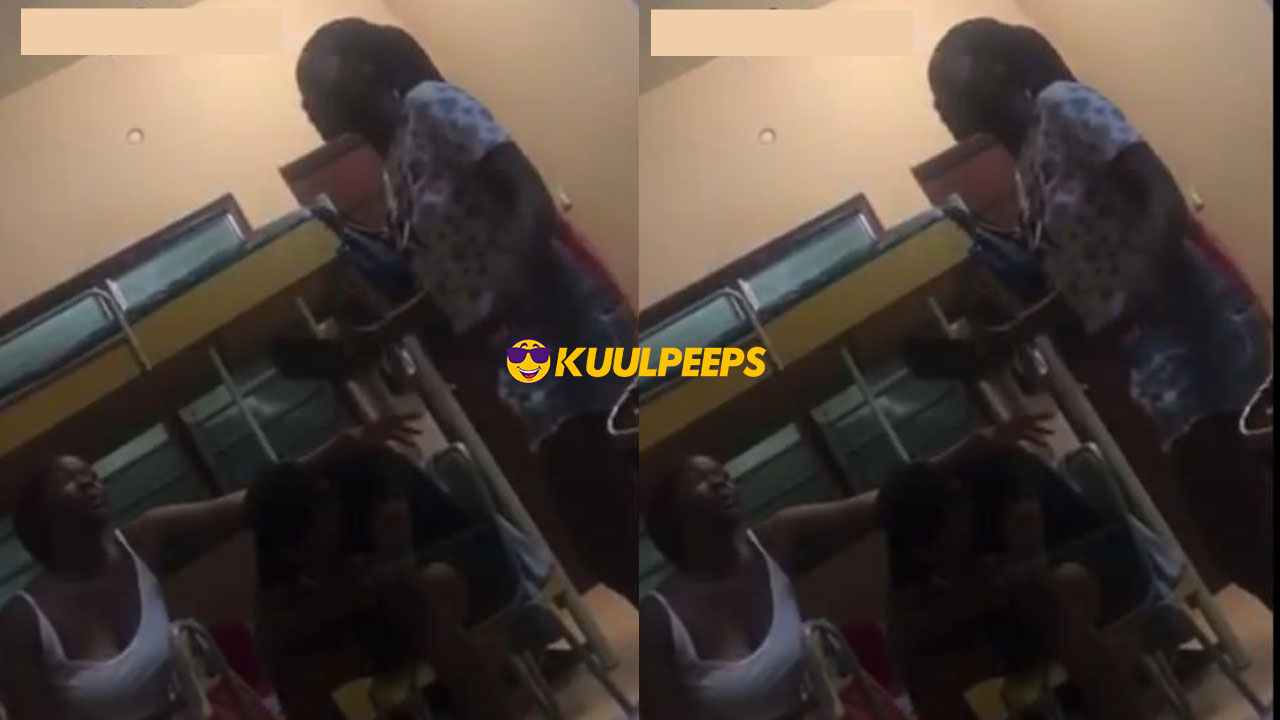 A video of a Legon student getting beaten by a girl who is reportedly his girlfriend’s friend is all over the internet.

See Also: Legon Student Gets Beaten By A Girl After He Was Reportedly Caught Cheating

The said friend whose name has been revealed as Karen was reportedly being loyal to her girlfriend. She is seen in the video, beating the boy, who has been identified as Papa Kofi, with a slipper (charlewote) in one of the rooms in the Diaspora halls.

Most students had a lot to say about the video so, Kuulpeeps Legon asked a couple of them what they thought about it.

One lady had some grown woman advice:

“This isn’t the best solution if you caught your boyfriend cheating. Sit him down talk to him, who knows maybe you did something wrong that made him cheat on you, after all, to err is human.”

Someone thinks forgiveness is the only way to deal with cheaters:

“The girl shouldn’t have beaten the guy even though he wronged her. The guy did well for not retaliating this shows he’s a gentleman”

“He ankasa he deserves it!!!
She should have used bankuta”

“Ah so why the Nigga no lef?
I mean, it’s bad to hit a girl but sitting there and receiving slaps be Jon move”

Fafa had the perfect solution:

“I’ll just walk away and let the gods handle it 😂”

Reynolds had another question for every single person who has watched the video:

“All those saying the guy is a jon boy, it would have been a different story if he had retaliated but Charley he shouldn’t have made this happen ah. It dey pain me give am.”

See Also: Some Legon Students Share Their Honest Opinions On The BBC Expose And Legon’s Involvement

Merlin thinks he would have handled the situation differently:

“He’s a full loose boy! How can you use slippers that you use in bathing and shanking to slap me?
Forget we no dey beat girl, I’ll beat you and go to jail.
You dey die koraa I’ll beat you”

Someway somehow, Nigerians got dragged into this:

“Men don’t hit women. It’s not right for a man to hit a woman, only foolish men hit women . Just imagine and she’s fooling the guy in the presence of her friends. At least behind closed doors that’s ok. My sister this why you girls hate Nigerians because a Nigerian man will never take such an insult. This is the length of disgrace! Even her friends are laughing what if they make up tomorrow.”

Another student thinks she deserves what she got (being cheated on):

“Please, the girl knew that before she went in for him.
You are dating Ghana Christian Grey
What do you expect?😂”

But this guy had the perfect solution for the “cheater”

Nana Kofi thinks everyone needs to be arrested:

“They are not married, she has no rights to abuse him, even the girl recording this shit should be arrested.”

Looks like everyone likes the guy’s reaction in the video:

And finally, from an angry student:

“The boy really no get sense
I never will allow a girl to touch me like that. How many times has my mom slapped me with her palm saf and not to talk of slips. Tsw I’m really pissed”

The girl, doing the beating has posted a video where she apologized for beating the boy and is sorry for reacting the way she did.

See Also: Legon: Lady Who Beat A Guy With A Slipper Has Apologised For Her Actions