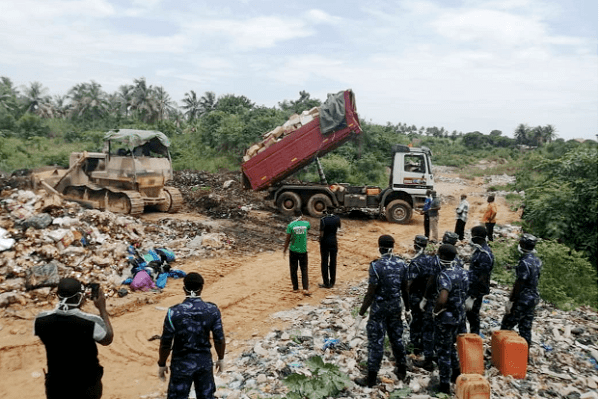 Five truckloads of unwholesome goods worth over GH¢1.8 million in customs duty have been destroyed by officials of the Aflao Sector Customs Division of the Ghana Revenue Authority (GRA).

The items included expired canned and bottled beverages, drugs such as aphrodisiacs and fake electrical appliances.

The exercise which was carried out last Wednesday was part of the Division’s activities to curb the influx of unwholesome goods that are illegally brought into the country.

Briefing the Daily Graphic during the exercise, the Customs Revenue Officer of the division, CRO Amandi Majeed, said the outright prohibition of the seized items was as a result of the collaboration between the Customs Division, the Food and Drugs Authority (FDA) and the Ghana Standards Authority (GSA) to ensure that consumables were safe for public consumption.

He called on the public to look out for expiry dates and the genuineness of the things they boy, adding that they must rely on local pharmaceutical companies rather than purchasing drugs from unknown foreign manufacturing companies.

“When considering buying drugs, get the right prescription from the doctor, our health and safety should be a priority,” he added.

He said the seized goods were kept at the customs warehouse for about a year.

The destruction of the items, according to the commander, received prior approval from the former Commissioner of GRA, Mr Emmanuel Kofi Nti.

CRO Amandi stressed the need for the public to be mindful of the items they purchase as well as electrical gadgets they use at home since they could be harmful and also check for the safety of the products they buy before using them.

He noted that some foreigners and Ghanaians peddled drugs which were not permitted in the country by the FDA and illegally operated on the blind side of the law by going through unapproved routes at the borders.

He, however, assured the public that the Customs Division was working tirelessly to sanitise the system to ensure that imported goods were safe for Ghanaians.

“We will try our best to always protect the public as much as we can but consumers must be careful about things they consume. Be careful of the drugs you buy because it could be dangerous for your health,” CRO Amandi said.

CRO Amandi commended the Ghana Standards Authority for arresting peddlers of the fake electrical appliances, such as ECG meters and electrical wires which were not safe for use at home and could cause fire outbreaks.