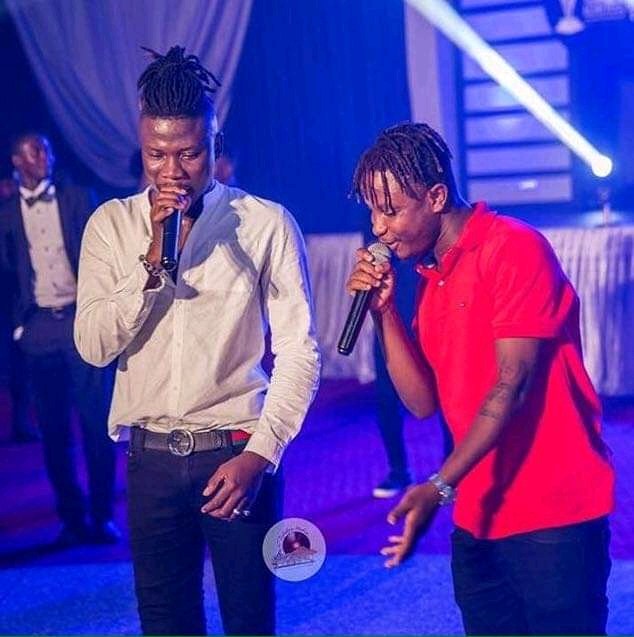 The friction between Stonebwoy and his protégé, Kelvyn Boy, stoked conversation among showbiz enthusiasts as the unfortunate incident was never anticipated due to the father-and-son relationship both artistes had.

Reports of a rift in the BHIM Nation camp were rife in August with many claiming Stonebwoy and his longtime manager, Blakk Cedi, had severed their working relationship and decided to go their separate ways due to some disagreements over monetary transactions, as well as management and control of the record label and its artists, Kelyvn Boy and OV.

The said reports were somewhat given credence days later when Stonebwoy and Kelvyn Boy unfollowed each other on social media.

As tongues wagged over what could have sparked the brawl, a statement from Burniton Music Group, of which Stonebwoy is the President, announced that Kelvyn Boy was no longer under the label.

According to the statement, an initial one-year contract the label signed with Kelvyn Boy expired on January 21, 2019, but after an “audit”, it had no intention of renewing it.

“Consequently, the Company has decided to release Kelvyn Boy from the Agreement and he has been duly notified of this decision. Accordingly, Kelvyn Boy ceases to be an artiste under the company and will no longer be associated with the company and/or the BHIM Nation brand…,” the statement said.

In his first interview after the announcement, a ‘tensed’ Kelvyn Boy reacting to the development, addressed several rumours and concerns, including a claim by Stonebwoy that he is ungrateful.

Here are ten key points from his interview on Hitz FM’s Daybreak Hitz with Andy Dosty:

Contrary to remarks by Stonebwoy that he had heard and seen unencouraging things about Kelvyn Boy that would make others call the artiste ungrateful, the latter said he has never exhibited such.

Without equivocation, he intimates, he has rather been appreciative of the assistance given him and it’s evident in how he has projected the BHIM brand on his various social media handles.

“I thought I have been grateful over these years…,” he says. “From two years till now, everything has been BHIM Nation. Check my social media handles; everything I post is Bhim Nation. I don’t know when and where I have become ungrateful. The only reason, I hear, is my statement about Afrobeat and dancehall. But I said that confidently because I picked it from him… I thought he stands for that and he’s been saying that for years. Maybe I went straight to the point.

“Stonebwoy texted me that the way I spoke about the thing, next time, I should watch but I don’t think that’s a reason enough to say I’m ungrateful.”

See Also: This How Social Media Reacted To Stonebwoy And Kelvyn Boy’s Split

2. I apologized to Stonebwoy but he ignored my apology

On the back of claims, he’s been ungrateful, Kelvyn Boy says he explored all avenues to render an apology to Stonebwoy but was unsuccessful.

“I wish I knew where I went wrong to be labeled ungrateful. I’d want to use this opportunity to apologise to him. I call him; he doesn’t pick. I’ve tried so many times to go and apologise in front of him… I wanted to go with Black Cidi and he kept postponing. The only opportunity I got to apolgise to him was when I went for a show. All of that has been looked down. I’ve gotten to this far and I don’t know what else to do,” he noted.

Asked why he did not send a text to Stonebwoy, he said he wanted to apologise in person.

3. I paid for my own videos

While reiterating he has not been an ingrate, Kelvyn Boy disclosed he paid for most of his videos.

He said: “I paid for 80% of my videos. It comes out with Bhim Nation tag because I thought Stonebwoy has been of help and the rest depended on me. He taught me how to fish, so I have to work hard to make them proud. I had to [pay for my videos].”

4. Stonebwoy was never proud of me

Although he salutes Stonebwoy for showing him to the world, Kelvyn Boy mentioned that if there was that one thing he expected Stonebwoy to do but never did, it was being proud of him.

Without mincing words, he stated that Stonebwoy was never proud of him.

“Everybody was [proud of me] except him,” said Kelvyn Boy. “He’s never been here to say I’ve done well but he’s been here to say bad things about me. That was the only thing I needed from Stonebwoy – to be proud of me and appreciate me because I served for years. I’ve been backing here and there…”

Watch Kelvynboy talk about Stonebwoy, Wiyaala and reveal a secret on 21 Questions || Emergers2019

5. My management don’t even know where I live

If he were ungrateful, he would have lamented how management to some extent cared less about him. Not our words but Kelvyn Boy’s.

According to him, his management had no idea where he stayed.

As he puts it – “My label doesn’t know where I live but I’ve not complained publicly. I don’t complain.”

6. I don’t know how I have offended Stonebwoy

Kelvyn Boy claims Stonebwoy has not been fair to him because although he goes about labelling him ungrateful, the BHIM Nation President has been silent over how he erred, and he is puzzled.

He says: “As it stands now, I don’t know what I did wrong. There is no reason.”

7. I never decided not to back Stonebwoy anymore

Before Kelvyn Boy was signed to Burniton Music Group, he had been backing Stonebwoy. In fact, he continued backing his hero until the speculations of a rift began. The question has always been ‘how come he stopped backing Stonebwoy?’

According to Kelvyn Boy, “It happened naturally. That wasn’t a decision from him or me. It got to a point we all had shows at different places… It’s not as though I thought I had become a star; it’s now that they are making me realise I’ve reached that status”.

The case of ‘new king, new law’? Well, Kelvyn Boy posits that the introduction of new management caused a change at the camp. They found his informal way of relating to Stonebwoy disrespectful. To be blunt, there was a cordial relationship at the camp until the new management began operation.

“I used to type ‘bro’ whenever addressing Stonebwoy. Since the new management came, when I type ‘bro’, they consider it disrespectful,” Kelvyn Boy added.

9. I will not take off my BHIM tattoo

His love for Stonebwoy informed his decision to have a BHIM tattoo. Ties have severed but Kelvyn Boy says he will never take it off. The reason is simple. He still cherishes his godfather.

See Also: Kelvyn Boy’s Got Some Tips On What You Should Do Before Getting Tattoos As Dope As His!

Unlike some artistes who are barred from performing songs recorded and released under a label they used to work with, Kelvyn Boy says he will always perform his. Responding to what will happen to the royalties, the artiste said he has no idea.

The big question has been whether or not Kelvyn Boy will succeed without Burniton Music Group with the abundance of talent embedded in Kelvyn Boy.