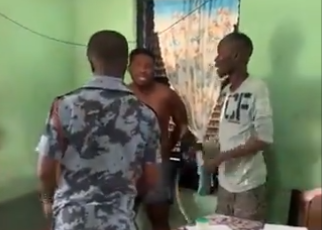 A video, which shows two police officers assaulting a suspect, has surfaced on social media.

The two police officers were captured on camera using belts to lash the civilian. According to TV3, the civilian, Alegbe Dodzi who is a 28-year-old was assaulted by the policemen in an effort to make him confess stealing an amount of GH¢1,600 belonging to his boss.

This incident happened at the Railway Police Station in Koforidua in the Eastern Region.

According to Isreal Laryea, a statement issued by the Ghana Police Service named the two as General Sergeant, Patrick Amoako and General Lance Corporal, Isaac Marfo.

We will bring you more on this story soon.

Below is the video of the assault:

This happened at the Railway Police Station! (Koforidua District Command) What are your thoughts, do they have the power to do this? Video: @serwaaamihere