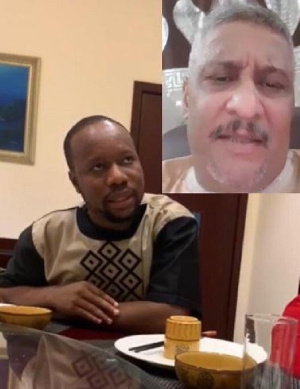 Popularly referred to as Omar, the alleged rapist, terrorist and scammer subjected his Ghanaian lawyer to human rights abuses of the most degrading order in Bamako.

The lawyer was in Mali upon invitation by the suspected Yemeni/ Malian criminal, with the sole aim of putting to bed a protracted dispute between Omar on one side and the families of Yousef Jibril and Hassan Zein, a Ghanaian business mogul on the other side.

Narrating his ordeal to the media on arrival last Friday, Eshun, lawyer for Omar said his client compelled him under duress (At gunpoint) to speak evil against Mr Zein, while his client recorded him on video in his (Omar) office, where his heavily built thugs and some corrupt elements of the gendarmerie.

The lawyer indicated that his client dictated his (Eshun) confession aimed at blackmailing Mr Zein.

Last week, the Yemeni crime suspect invited his lawyer to Bamako, after Dr Hassan Ayariga, Alhaji Sulley Bashiru and Ahmed Agali Bashir, honorary Consul of Niger in Kumasi had brokered a peace deal with Mr Zein to end a long-standing friction between Omar and Mr Zein.

Mr Zein incurred the wrath of Omar after the latter discovered that the former offered help for the minor rape victim.

Attempts by the National Chief Imam, Dr Sheikh Osman Sharabutu and other top officials had fallen through.

Omar, who holds multiple passports and declared wanted in many African countries keep promising to smoke the peace pipe after agreements have been reached but go contrary to his words.

He was expected to sign a peace document, which his lawyer (Eshun) sent to Mali, admitting his wrong actions in the past, only to turn around and subject his lawyer to ill-treatment.