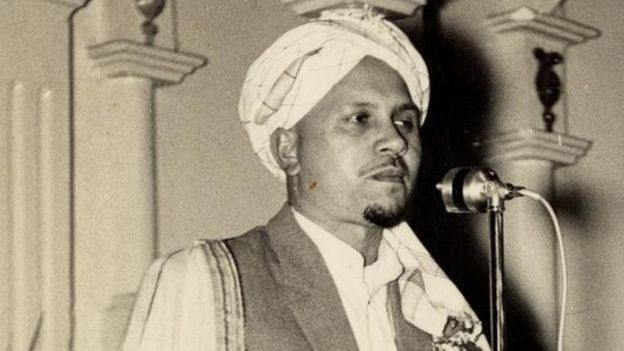 After a whopping 123 days in torturous solitary confinement, Imam Abdullah Haron gave up his fiery fight against the dreaded racism in South Africa – dying on September 27, 1969.

Haron died at age 45 as a pioneering South African Imam, the BBC reports. His death, according to those, who attended his funeral was so painful and shocking.

Two events were said to have occurred in Cape Town South Africa on September 29, 1969 – where Haron was laid to rest – a huge funeral match where some 40,000 people carried his coffin for about 10km (six miles) to the Mowbray Muslim Cemetery and a rare massive earthquake at night.

Haron’s fight against racism had deep repercussions not only in South Africa but also in the rest of the continent.

Born in 1923 in Cape Town, Haron became famous when he allowed Black Muslims into the Claremont Mosque where he was the Imam, publicly declaring that black and white Muslims are fellows.

Incensed by Haron’s struggle and abhorrence for apartheid, a system of institutionalized racial segregation, the regime detained him and after 123 days of brute torture he succumbed and passed away in 1969.

It has been 50 years ago since the death of Haron and as the first cleric of any faith to die in custody under the apartheid regime his relatives and friends are still traumatized by his demise, the BBC reports.

Haron’s death stirred global outrage, and he became the first Muslim to be commemorated at the famous St Paul’s Cathedral in London.

According to the Apartheid regime’s security police, he died after falling down a flight of stairs, suffering two broken ribs and 27 bruises on the body, denying any foul play, despite their notoriety for using torture and beatings.

The family has rejected the Security Police’s account and as part of activities to mark 50 years of Haron’s death are demanding a fresh inquest into the circumstances surrounding his death.

See Also: Mary Fields: The First Black Woman Who Was Employed To Carry The U.S. Mail

Haron was the walk-the-talk type. He practised what he preached to the chagrin of South Africa’s apartheid regime.

In a public meeting held at Cape Town’s Drill Hall in May 1961, Haron condemned the apartheid law as “inhumane, barbaric and un-Islamic”. Four years later, like millions of other South Africans, the imam and his family were forced out of their own homes.

Haron did not allow fear to stop him from speaking out against the injustices of the apartheid region. He defied many other imams and confronted the regime head-on and expressed his disquiet with the law.

Apartheid, originating from Afrikaans, was given by white-ruled South Africa’s Nationalist Party in 1948 to the country’s harsh, institutionalized system of racial segregation, came to an end in the early 1990s in a series of steps that led to the formation of a democratic government in 1994.