If you wear high heels at work, prepare for some good news – and some bad.

Men are almost twice as likely to smile at a woman in heels than one in flats and are significantly more likely to offer her help.

But the same academics also point out that the shoes cause back pain, broken ankles and sprains, and more than double the risk of developing bunions.

They add that women who wear heels can suffer injuries from their toes up to their spine, and are more likely to fall. The scientists even go so far as to say that tougher laws are needed to stop women from being forced to wear high heels at work against their will.

The findings follow high-profile complaints from women told to wear heels as part of their job.

An air hostess said she was made to feel like a ‘prostitute’ by British Airways because she had to wear high heels in airports. BA, however, does not make staff wear them while working on the plane. 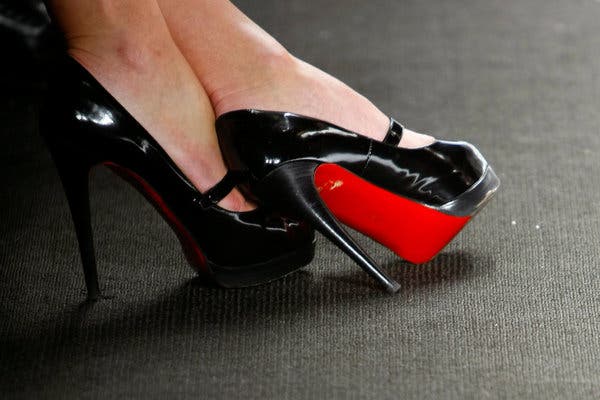 And last year receptionist Nicola Thorp was sent home from a London office after arriving in flat shoes and being told she had to have a 2in-4in heel. She set up a petition, which attracted more than 152,400 signatures, asking for a law banning firms from demanding that women wear heels.

A team at Aberdeen University reviewed 20 publications on high heels to find a high risk of injury and musculoskeletal pain. The results are published in the journal BMC Public Health. Lead author Dr Max Barnish said: ‘There is pressure on women to wear heels, and celebrity influence with people such as Victoria Beckham and Kate Middleton making it fashionable to do so, whether they intend to or not.

‘There is often not an absolute rule to wear heels, but in some workplaces there can be an unspoken expectation which means that everyone does it.

‘Evidence shows women are suffering ankle fractures and sprains, back pain and bunions. But they are judged to be attractive, which creates a dilemma. We feel the Government should follow the lead of other authorities which have introduced specific laws to tackle this practice rather than relying on existing legislation.’

A Government spokesman said: ‘No employer should discriminate against workers on grounds of gender – it is unacceptable and is against the law. Dress codes must include equivalent requirements for both men and women. To make the law clearer to employers and employees, the Government will produce new guidance on workplace dress codes.’

14 Male Celebrities Whose Locs Give Us Hairgasms

VIDEO: Wanlov Swims Naked In The Sea To Raise Awareness On...