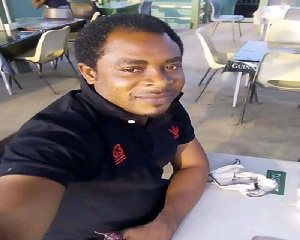 Popular radio presenter with Adehyie FM in Kumasi has died in what family, friends and colleagues say is difficult or impossible to understand.

Badala Hassan reportedly fell down and fainted Thursday morning September 12, 2019, and was rushed to the hospital where doctors declared him dead on arrival.

Just last week, Hassan was appointed the new Programs Manager of Adehyie FM and was scheduled to host a maiden show at 7 pm on Friday at the Oseikrom based media outfit, just hours before his unexpected death occurred.

Some industry players have since thronged social media to disclose how they feel overwhelmed with grief over their colleague’s death. Some do not still believe Hassan is actually dead as according to them, they interacted with him in the last few days.

Nhyiraba Agyei wrote: “This is how the media fraternity is; appointed as Programs Manager last week and died this morning…”.

King said: “Is it true? I spoke to him, a few days ago and he’s supposed to Join me @Zion the deal was seal last two week & was expecting him to come & put something on paper la”.

Bernard Amponsah also wrote: “We were with him last Friday with bishop Columbus”.

Hassan, as he is affectionately called, formerly worked with Ash FM, Bohye FM and Fire TV, before joining Adehyie FM, a subsidiary of Class Media.

He is married and left behind a 4-month-old baby.