Gone are the days where people used to think that models were only beautiful/handsome with nothing in their heads and absolutely no personality.
Some models might be the regular party girls you know, some may have not even finished school whiles others have, some models might be professional doctors, housewives, moms, or even grandmothers. No two people are the same, this goes for models as well.
Akinyemi Akinro is part of the well-educated population of male models and Fashion designer based in Canada who studied Mechanical Engineering at the University of Ottawa and was discovered on Instagram in 2015 by a modelling agency, Models International Management.

Since getting into fashion, he has been the Male Model of the Year at CMTC, walked for Richard Robinson Fashion Academy as well as RunwayForHope and has been in several creative photoshoots including shoots with Faces Magazine. 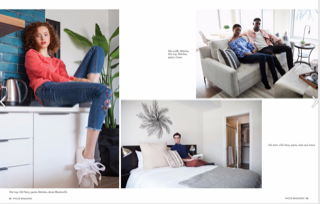 He has also started a brand called ODDMINDS with a few other creatives where he designs all the clothing; having several successful pop-up shops across the country.

Check out some of his pictures.

For freelance inquiries or anything else, his Instagram handle is @loverboyakin