In December, there’s no way you would be in Ghana and not be at Mr Eazi’s Detty Rave concert!!!

He’s held the concert twice in two years and early this year, he announced that the third edition will be called Detty Rave 3: the Homecoming.

The date is already out and has been scheduled for the 27th of December.

The thing that makes Mr Eazi’s Detty Rave unique is that he always has an amazing lineup of artistes! Each year, big artistes from all parts of the world come on stage to give the concert goers the time of their lives and sometimes there are even surprise performances!

See Also: Photos: Here’s How The Detty Rave Went Down

He revealed that Koffee will be at Detty Rave!!!!

We don’t care if no one else comes because Koffee is such a huge artiste in Jamaica right now and has been all over the world for her extremely successful EP, ‘Rapture’.

See Also: These Music Albums Hit Us Really Hard Over The Weekend And We Totally Recommend Them!! 10/10!!

The ‘Rapture’ hitmaker confirmed that she will, indeed be in Ghana for Detty Rave 3 by quoting the tweet with: “See You soon Mama Africa”

No, Koffee… see YOU soon in Ghana!! 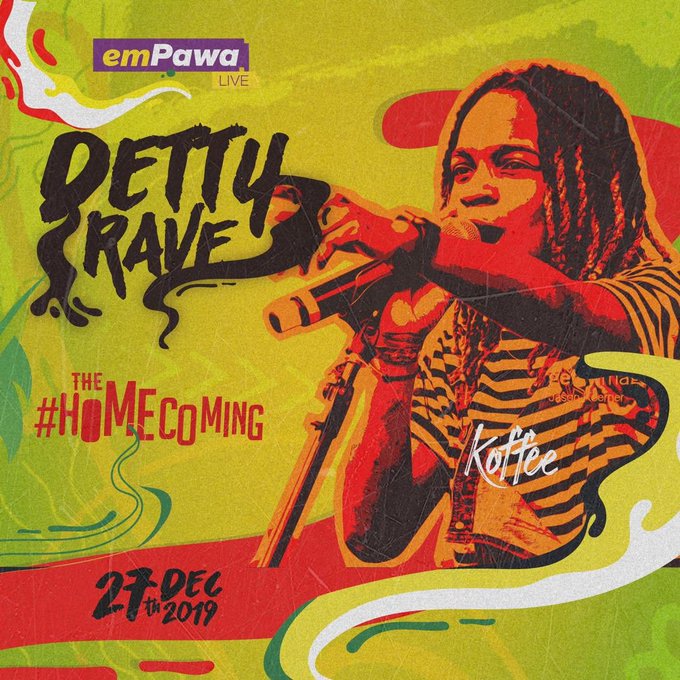 Koffee is a Jamaican dancehall/reggae artiste. She has an EP, ‘Rapture’ which has the hit songs, ‘Toast’ and the title track, ‘Rapture’.

We cannot wait to jam to her songs live, right here, in Ghana!!