Sophie Turner seems to be making sure that Joe Jonas marks his 30th year in style. First, she seized an opportune moment to surprise her husband on stage while he was performing in Washington with his brothers, Nick and Kevin. Taking to the stage, she appeared with a decadent cake while the crowd sang “Happy Birthday” to the pop star. The pair then took to the streets of Manhattan wearing party hats. 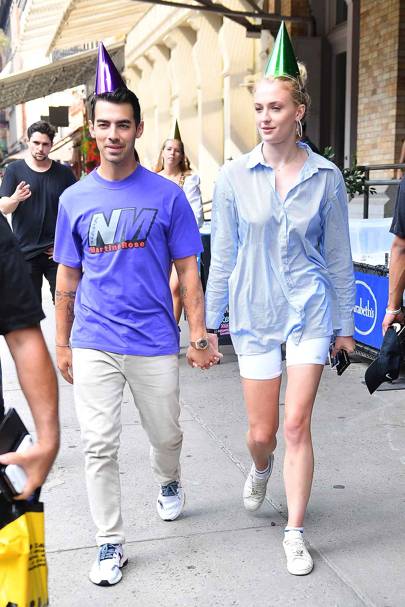 Turner then threw Jonas a James Bond-themed party at Cipriani Wall Street – and went to town with the theme. She wore a navy Alexandre Vauthier spring/summer 2013 couture dress, paired with a gold choker and matching Gianvito Rossi heels. Jonas, who arrived in an Aston Martin DB11 Volante, opted for a white tux. Turner shared a photo of them ready to party while standing next to gold, silver and black balloons, writing: “Happy Batday Birthman”.

Priyanka Chopra and Nick Jonas channelled the theme with ease, too. Chopra wore a black feathered Ralph & Russo Spring/summer 2019 couture dress with Amina Muaddi “Adwoa” crystal and feather-embellished slingbacks, a pair of Walters Faith earrings and a black ruched clutch. While Nick – in contrast to his brother – wore an all-black tux. 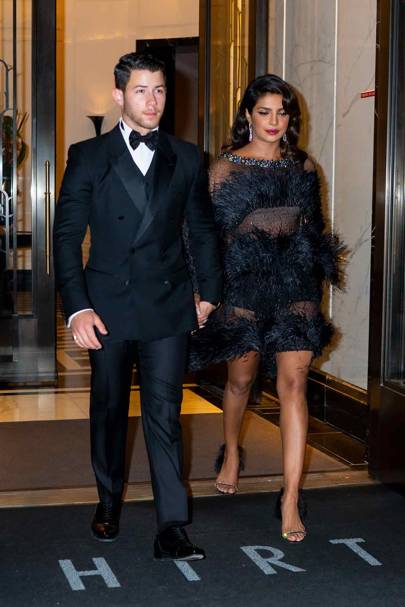