Kuulpeeps – Ghana Campus News and Lifestyle Site by Students
Home TRENDING News Memphis Depay Is Back In Ghana To Fulfil The Promise He Made...
Facebook
Twitter
WhatsApp

Memphis Depay is currently in Ghana, Cape Coast to be precise, to enjoy his summer break and most importantly to engage in charity work.

See Also: Memphis Depay Is Set To Be In Ghana Soon To Visit The Cape Coast School For The Deaf And Blind

He donated an Index Braille Embosser- Everest- DV5 for the production of reading materials for visually impaired students of the Cape Coast School for the Deaf and Blind, last year.

During his visit to the school last year, Memphis promised his foundation, the Memphis Foundation would construct a state-of-the-art gym and swimming pool for the school this year, adding that he would visit the school every year to train the students.

And we guess he’s back in the country to fulfil the promise he made to the students.

In the photo below, the footballer is seen dressed like the students in a uniform. 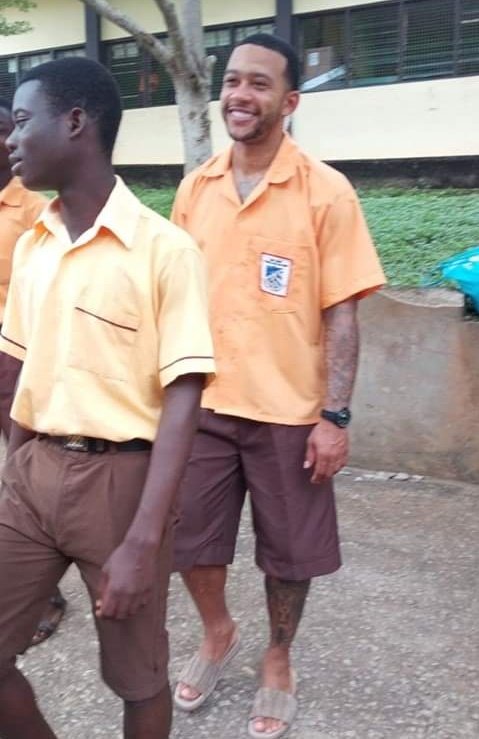 The former Manchester United winger, besides Charity work, he is also having a good time in Ghana.

He’s been hanging out with highlife musician, Bisa Kdei in Cape Coast.

In videos Memphis posted on his Instagram stories, Memphis is seen chilling with Bisa Kdei and some other guys at a beach.

Memphis Depay is a Dutch professional footballer who plays as a forward for French club Lyon and the Netherlands national team. Memphis was born on 13 February 1994 to a Dutch mother, Cora Schensema and a Ghanaian father, Dennis Depay in South Holland village of Moordrecht. He formerly played for English club, Manchester United.