Ghana is really an interesting country… In fact, you have to love Ghana cos when you think you’ve seen and heard it all, something bizarre and mindboggling happens.

So, the Ga West Municipal Assembly organised an auction for goats!

Yeah, you read right! The Assembly auctioned four goats which it recently arrested for straying and raised GH₵665 from the auction. 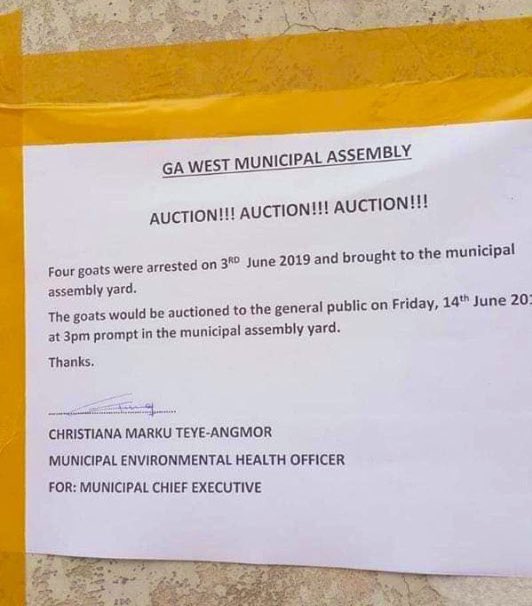 What’s even surprising is that the Assembly named the four goats; Emmanuel, Joseph, John and Andrew.

According to the story by Graphic Online, the Municipal Chief Executive of the area, Clement Wilkinson, carried out the exercise to deter people from leaving their domestic animals to stray in people’s homes and backyards.

He also stated that the auction by the Assembly was not a crime since it was backed by law.

Under the by-law of the Assembly, where an impounded animal is not claimed within a period of four days, the Assembly shall cause a notice of the impoundment to be displayed at a conspicuous place in the area for six days.

At the expiry of the period specified, if the animal remains unclaimed, it shall be sold at a public auction by a licensed auctioneer or any other person appointed by the Assembly for that purpose.

Following the auction, Mr Wilkinson cautioned the buyers to ensure that they do not leave the animals to wander in the community.

Failure to obey the by-law, Mr Wilkinson stressed that the animals would be recaptured and re-auctioned.