We all know Game of Thrones is based on George R.R Martin’s books.

And there’s nothing more annoying than seeing someone say “Oh Game of Thrones, I am reading the books. I’m not really interested in the show”

The book is good. The show is also really good but there are some really big changes in the show that are very different from the book, which makes it even more exciting.

Remember the gruesome Red Wedding? The one that scarred us for so long? Sometimes, when there’s dumsor and we are lying in the dark, we see Robb, his Mother, Caitlyn and his pregnant wife Talisa get slaughtered all over again. That’s what happened in the show. All three died.

In the book, Robb’s wife was called Jeyne. She never went to the red wedding because they felt it will be disrespectful since Robb was promised to one of Walder Frey’s daughters. One other thing is, she was never pregnant. Yhup, Robb and his Queen, in the book, could not have children.

Ramsay Bolton married Sansa remember? Yes, of course, you do cos the nasty guy did all sorts of things to her that made you want to kill him right?

Well, in the book, thankfully, it wasn’t Sansa who had to endure all that humiliating pain. Ramsay married a fake Arya Stark. Yhup, our favourite Stark was being impersonated by a childhood friend of Sansa’s called Jeyne Poole…against Jeyne’s will of course. The only way to legitimize Ramsay’s claim of the North was to marry a Stark and what better way to do it than to lie to the Northerners that they had found Arya??? Sansa was still in the EEyrie the whole time. 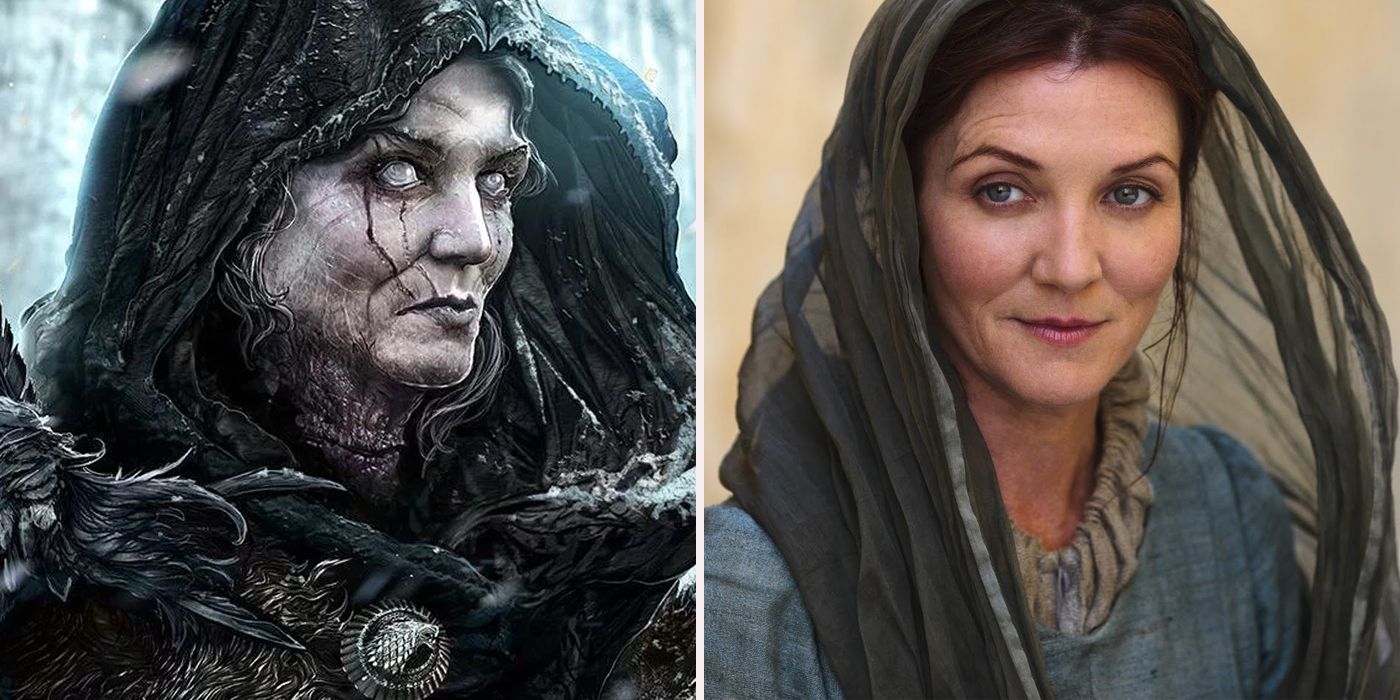 You thought it was just beyond the wall that dead men came back to life in the creepiest way possible? Lol, hold that thought. Remember how Catelyn Stark died? Of course, you do. It’s hard to clear the memory of Catelyn’s throat being sliced right after she killed Walder Frey’s young wife.

According to the books, Catelyn’s body was retrieved from a river by…get this…Nymeria!!! Arya’s direwolf. And…guess who found the body? Beric. He’s the guy who has been brought back to life a million times (we exaggerate) and went North to help Jon Snow capture a White Walker. Remember? Well, in the book, Beric exchanged his life for Catelyn Stark by giving her some life exchanging kiss (probably Lord of the Light magic) but!!! Catelyn Stark didn’t become a fully recovered Catelyn. She was alive but she looked more like a corpse and couldn’t speak and… well she went on a Lannister killing spree and even almost killed Brienne!! lol, She was cold and merciless and was known as Lady Stoneheart.

Remember Ser Barristan? the anointed knight of the Kings guard who served as the commander too until Joffery dismissed him after he openly said something against Joffery and basically refused to let the annoying little thing of a King tell him what to do? Remember he willingly stripped off his vows and went all the way to the other side to serve Daenerys which made sense cos he was the Lord commander when her Dad ruled. You probably forgot but he died in some alley, fighting the Harpys.

In the book, our man never died! He’s still with Daenerys giving advice and fighting for her! 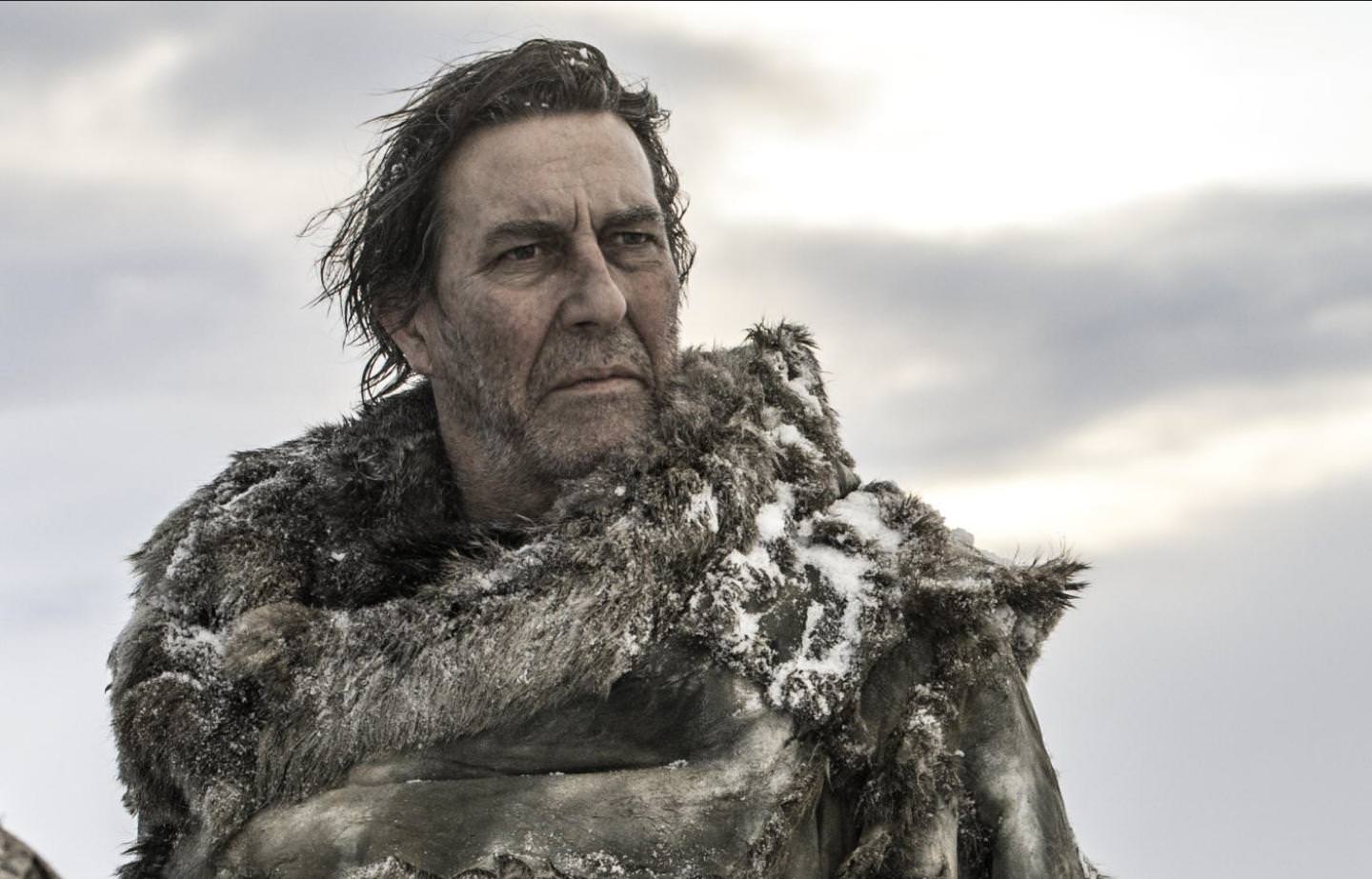 The King beyond the wall. He died right?

Mance Rayder was burnt alive in the GOT show. Oh wait, he was being burnt alive by Melissandre when Jon Snow shot an arrow through his heart cos charle…what’s this?! Small ‘I won’t bend the knee to Stannis norr…”

Well, in the book, Mance didn’t die. Melissandre did some magic called glamour that made Mance look like one of his lieutenants called Rattleshirt. (Probably the same magic she’s using to hide her true extremely old abrewa nana form). In the book, Rattleshirt was the one who got barbecued but everyone still thinks it’s Mance Rayder and well, Mance is moving around with Jon Snow, training with him and fighting with him like he’s Rattleshirt.

Missandei and Grey Worm were never in love

In the show, we can clearly see the growing romance between the translator, Missandei and the Unsullied commander, Grey Worm that is definitely going to be the death of him before this show ends. (Yes we are predicting cos did you see the season 8 trailer? The one where he and Missandei share a loong kiss before he goes into battle? Yhup…love equals a weakness which will definitely let him die.

Anyway, in as much as they are cute and adorable, in the book, no unsullied soldier falls in love with a translator. Know why? It’s because Missandei is about 10 or eleven in the book and well…it will be grossly inappropriate for the author to make her start a relationship at that age with a grown man soldier. So yeah, in the book, not even an iota of affection.

You remember how she died in the show right? That deadly kiss from Ellaria Sands right before she left with her uncle/father Jaime for Westoros. Yhup well, in the book, she didn’t get to die like that. She had to lose an ear first and well, she isn’t really dead yet…she’s on her way to Kings Landing, a once beautiful girl now disfigured with just one ear. Cersei will be soooo mad!!!!!! Lmao!

There are a lot more differences in the book and the show like Daenerys not really being fireproof except for that one time she had to burn to give birth to her dragons. Oh and Aegon Targaryen is alive too and is hoping to take over the iron throne with Daenerys, his aunt as his queen and oh yeahhh in the book, Daenerys isn’t that much of a heroine. In fact, she’s facing problems because of her killing people to free other people spree. Serious problems oo, not the brief one she faced with the Sons of the Harpys.

So yeah, that’s almost all of it.

We have just one thing to say tho…if you think you’re going to keep reading the Game of Thrones books as a replacement for watching, stop or just do both cos you’d get lost when the watchers of the show are having discussions!!

So…happy watching from Season one episode one!! You still have time before the new season drops!