Y’all know the rule for this December right??

Chill so hard that enjoyment begs you to stop!!

We already started spending our December money and you’ve missed out on a couple of events already!! First there was the Kweiks DTC Experience on 1st December and on 7th we had to split ourselves into many parts just to be at Worlafest at Alliance Francaise , The S Concert at Trade Fair and Wiyaala’s concert at Alliance too and oh we played games at Ampe League on the 8th at Serallio!!

Now that you see what you’ve missed, here’s where you need to be this December!!!!

It promises to have performances from the biggest names in the industry now now. The best part is, there’d be games and a meet and greet before the concert officially starts in the vening!! Yhup so you get to mingle with your artistes efore they thrill you later!! Tickets are going for 50 cedis. Call 020904196 for tickets enquiries 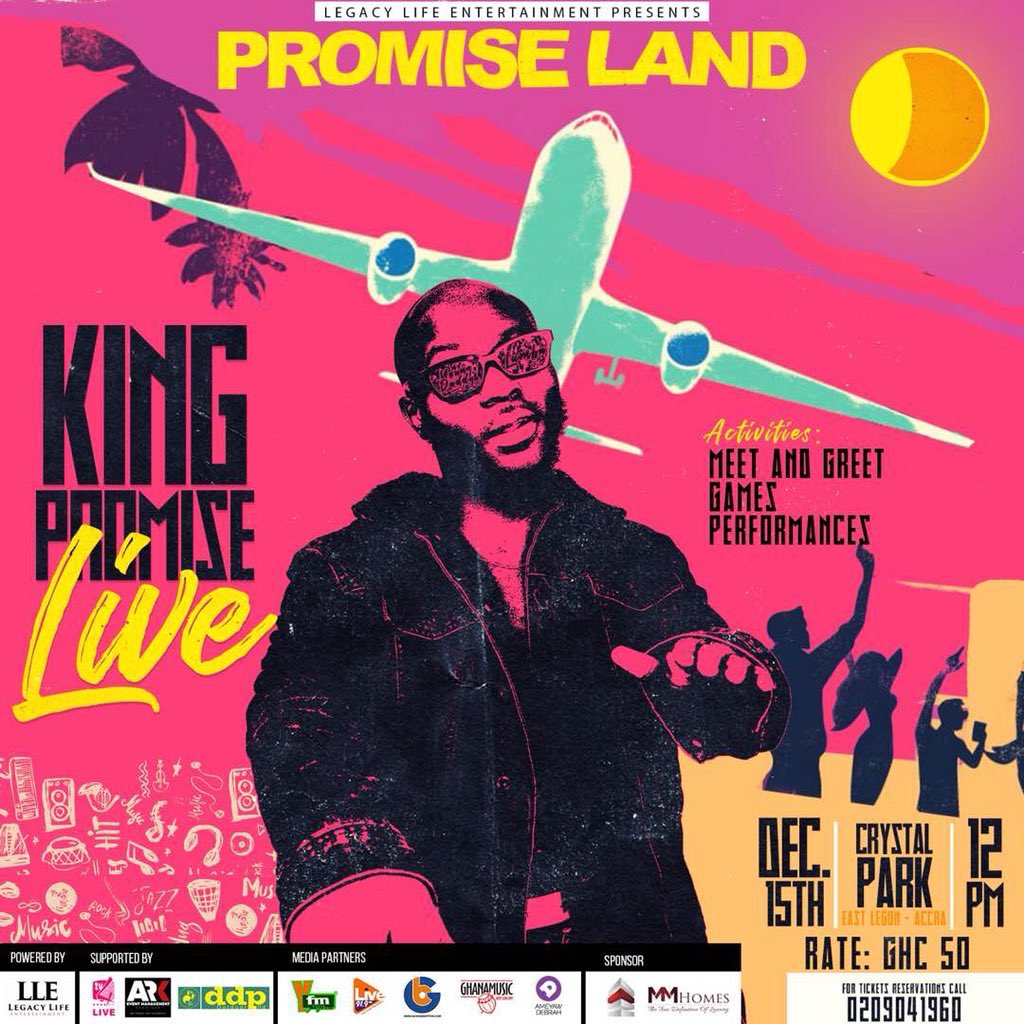 Snkr Design Collect on 15th December at the Lokko House

If you’re a sneakerhead…you need to be there!!

If you’re down for a road trip to see the Rockstar perform, do wild!! Tickets are going for just 10 cedis regular and 50 cedis VIP. Vyrusky will be playing so you know it’s definitely going to be extra extra!! You can get the tickets online on www.ticketmiller.com 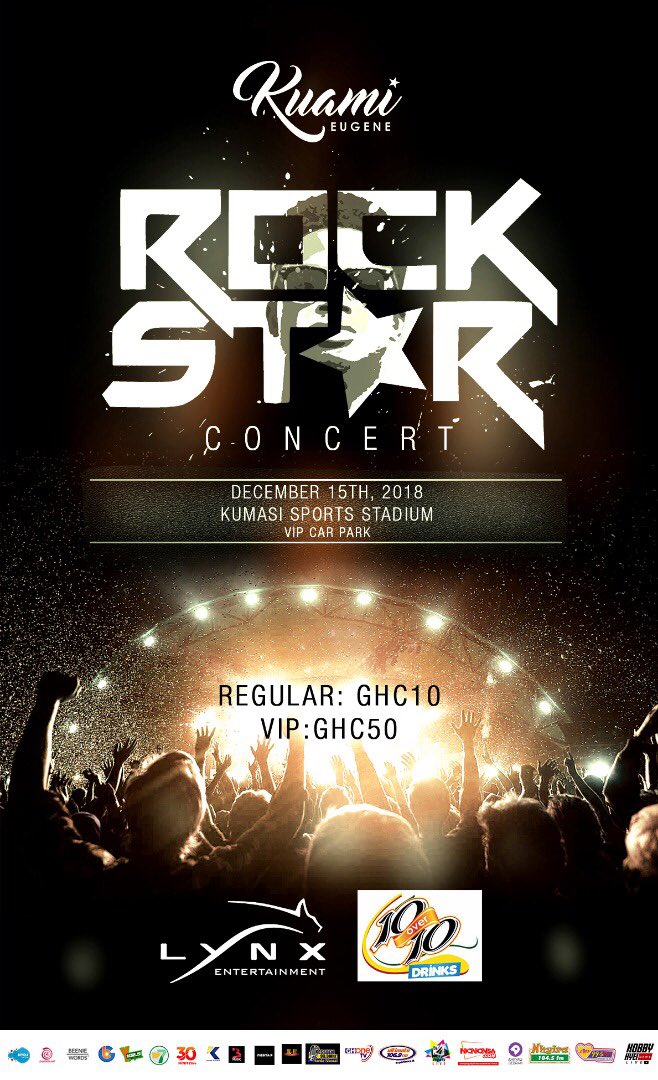 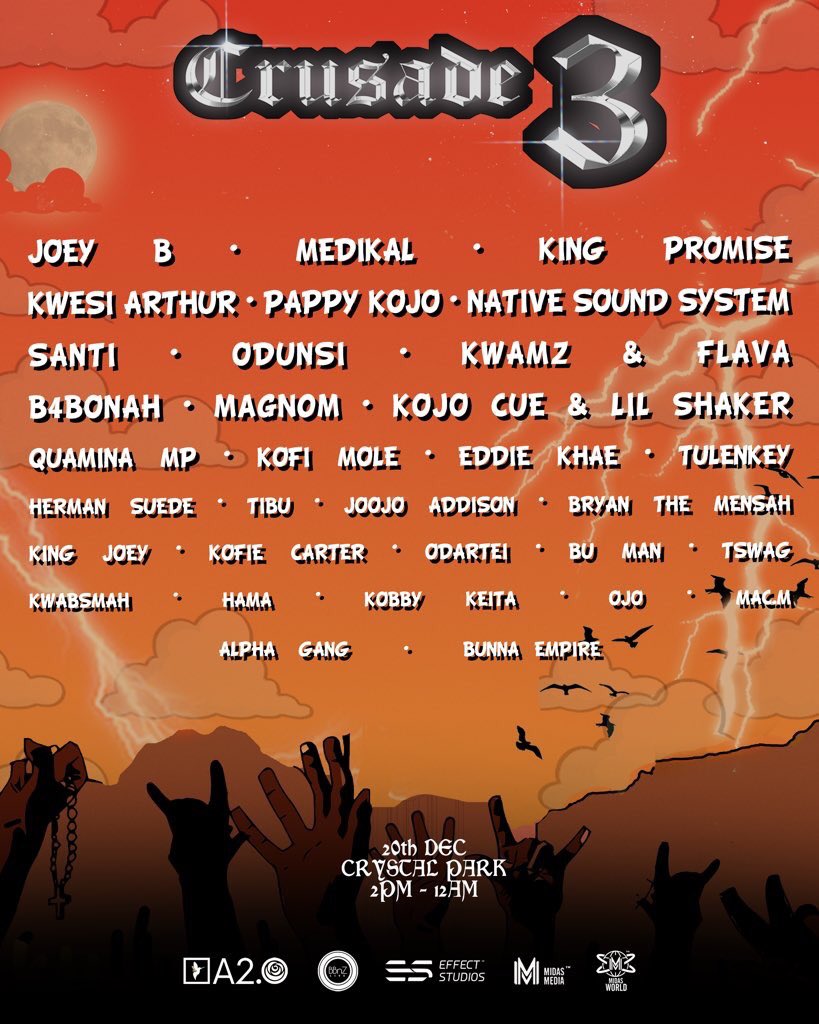 
If you love the new Kakalika hit single by Sister Deborah, then you should definitely be at her pop up shop in East Legon on 20th December to jam, eat and buy her Nurd Tees. 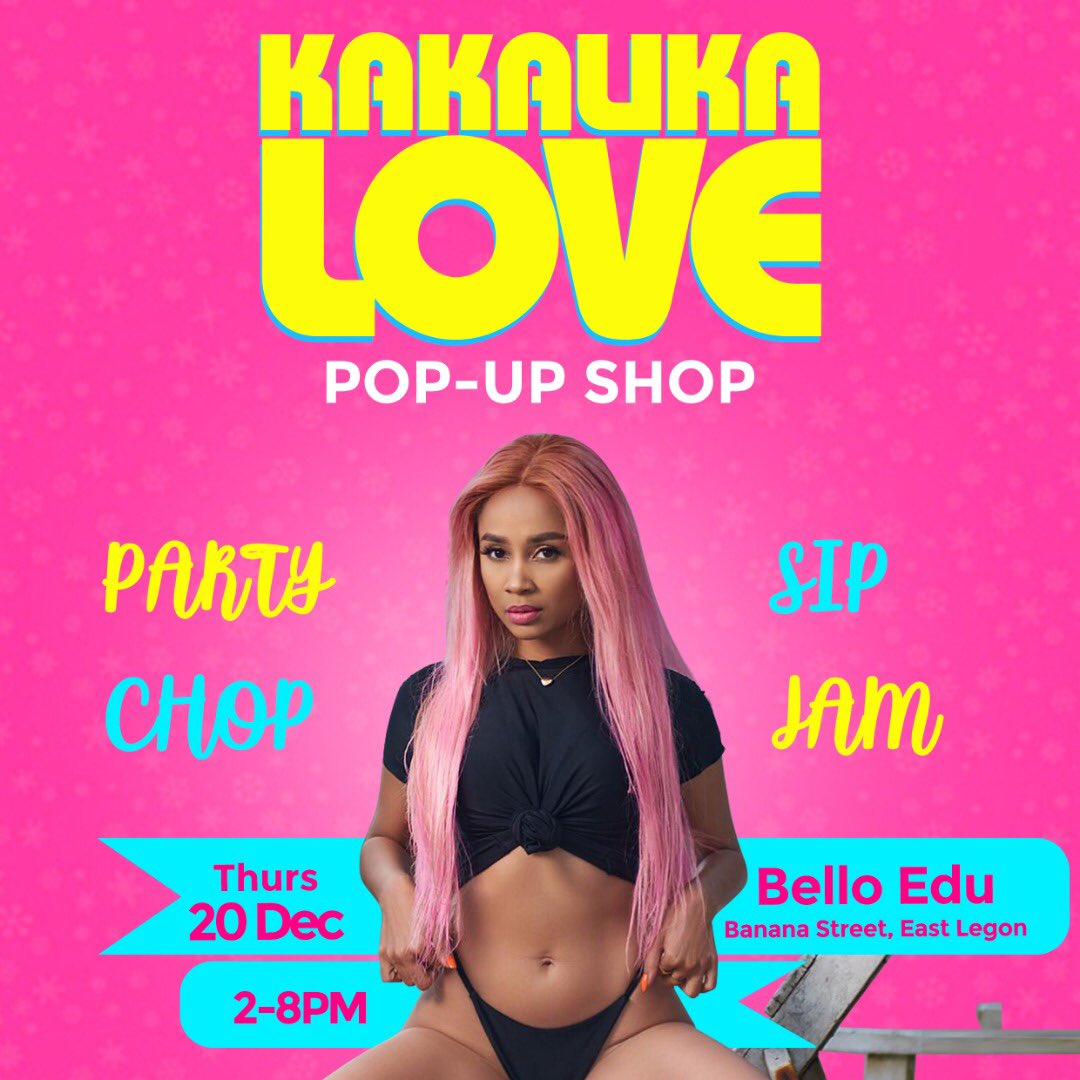 The Legends are not leaving the Christmas enjoyment for only the young ones this year!! He’s got Kuami Eugene, KiDi, Guru, Tinny, Prince Bright of Buk Bak fame, Guru, Article Wan, Donzy, Nero X, Nii Funny and AK Songstress all lines up to perform!! Tickets are going for 20 cedis and 50 cedis.

Medikal swears the misbehaviour is going to be mad!! so leave the heels at home ladies!!!

Girl Talk with Efya on 21st December at the National Theatre

Efya’s headlining this year’s Girl Talk too and remember…it’s a Girls only event! No men allowed. Regular tickets are going for 120 cedis and VIP for 170 cedis. You can get your tickets online, on www.ticketmiller.com 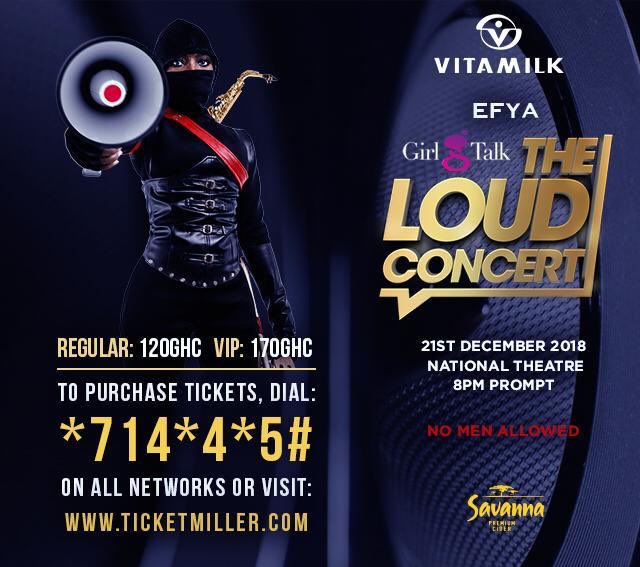 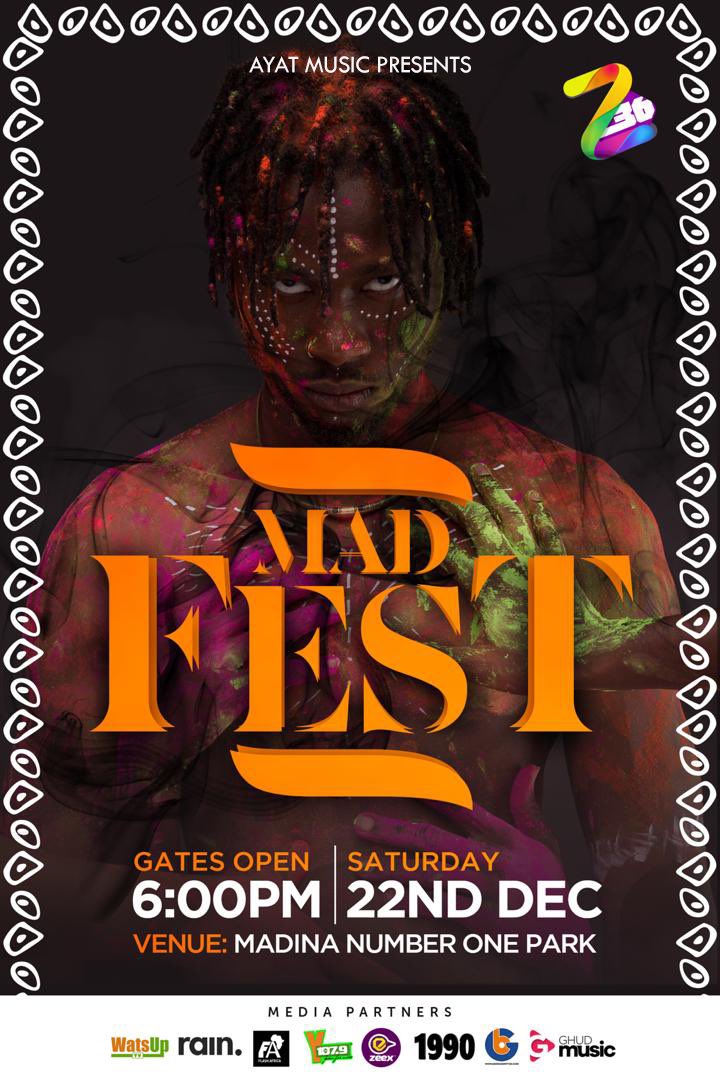 It’s the official cheat day for everyone on a diet. If you love junk food, you know where to be! It’s just 20 cedis to get in! 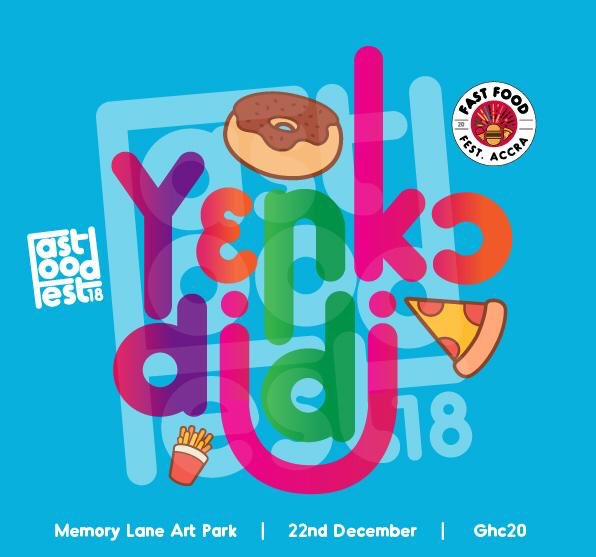 The Waakye Summit on 22nd December at the Efua Sutherland Park

Every waakye lover is going to be in one spot! 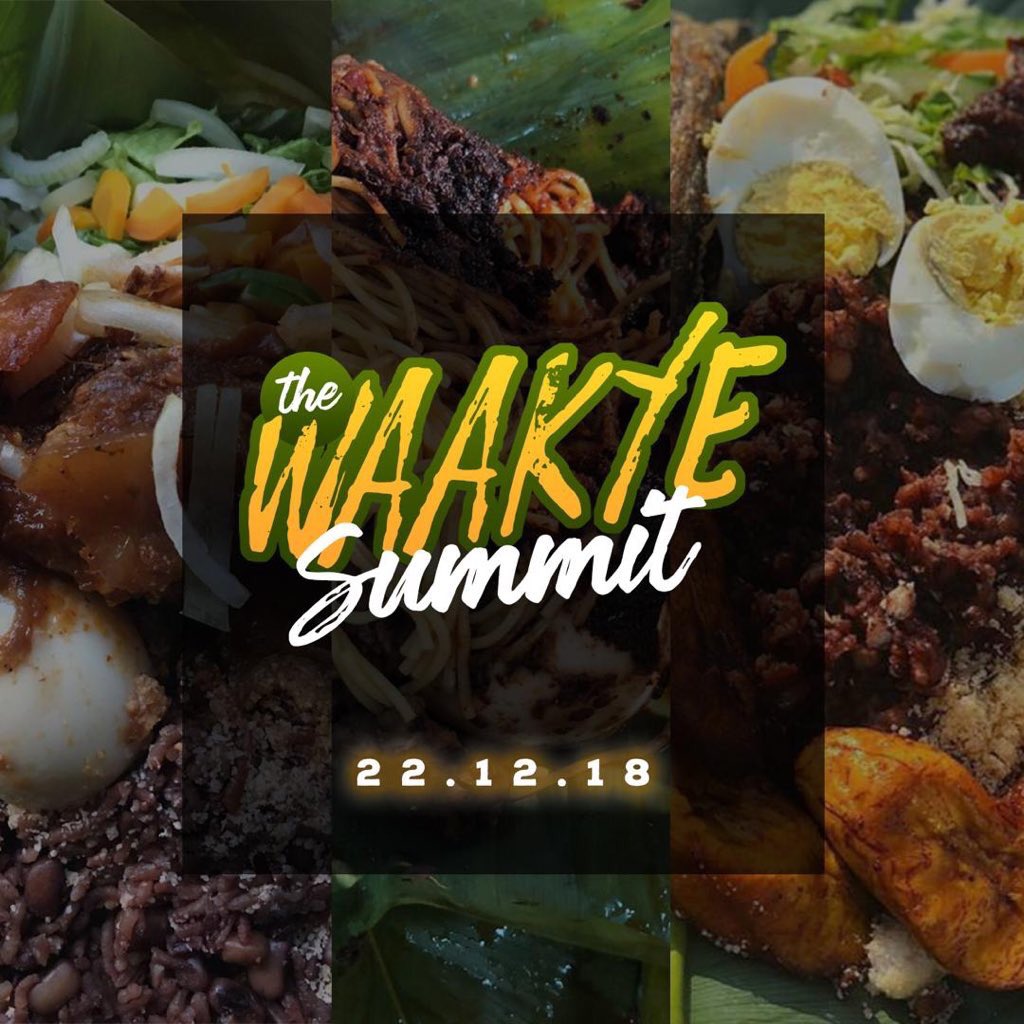 Manifest revealed that Simi and Burna boy will be joining all your fave Ghanaian acts on stage on that day!! Early Bird tickets went for 60 cedis but tickets are now going for 120 cedis and you can get yours from Hitz fm, Live Fm and the Joy fm front desk, Enda in Accra Mall, Cafe Kwae at Airport or call 0209470570. You can also purchase yours easily online, on GMTlive. 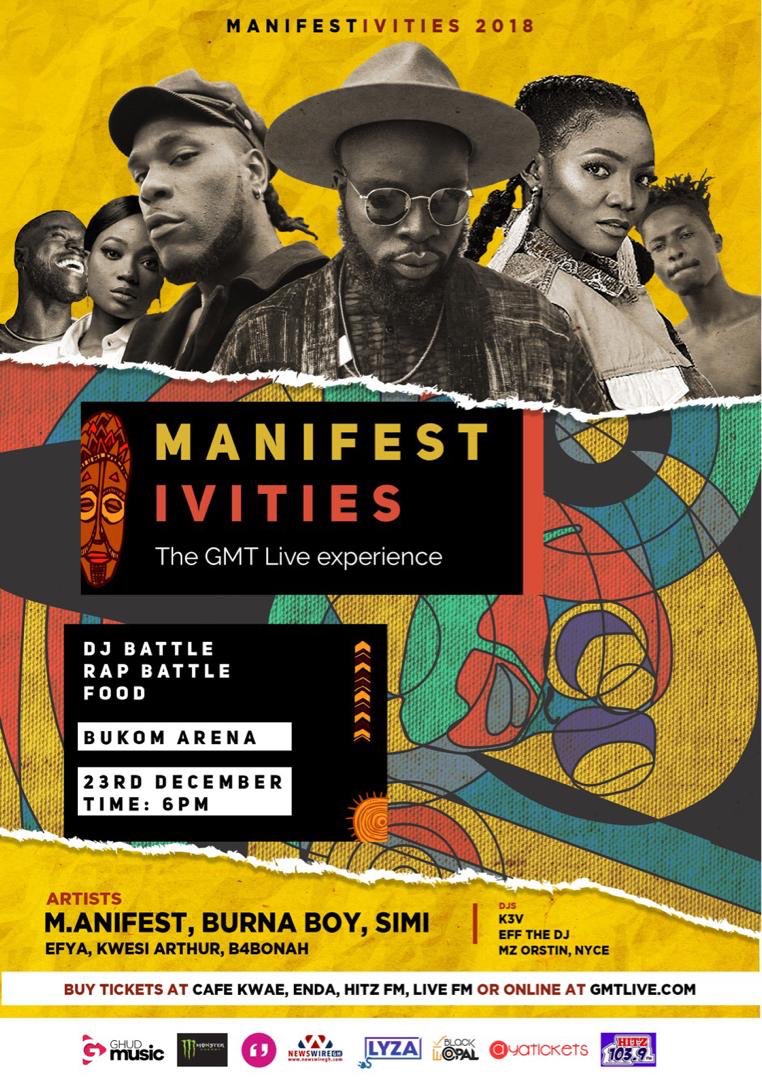 Lyte Up on 23rd December at Serallio

The Ghana Movie Awards on 23rd December at Kempinski Hotel 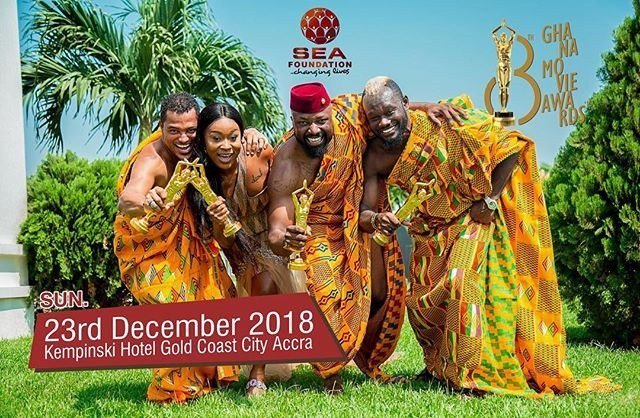 Artistes on the bill include Kuami Eugene, Bisa Kdei and more. Tickets are going for 20 cedis and you get a freeKasapreko drink too!! 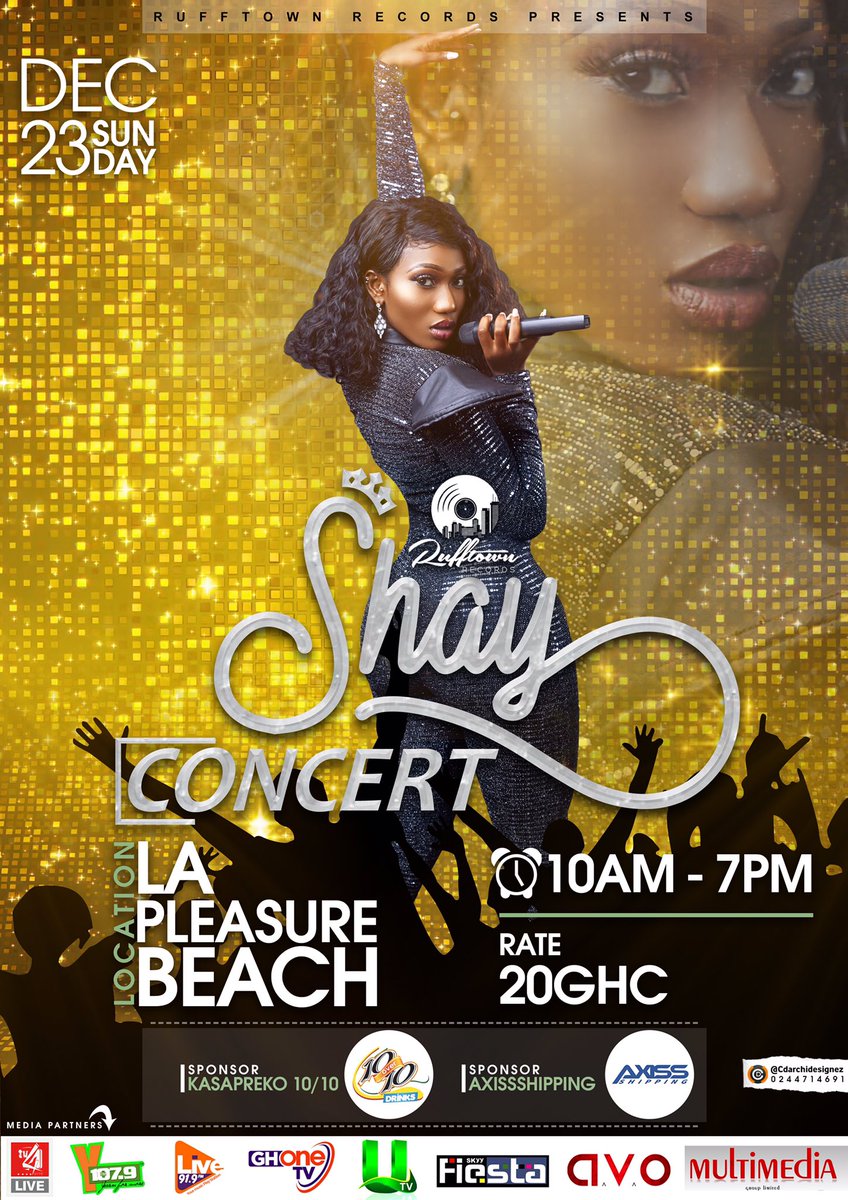 All the big stars are coming together for the biggest Christams party in GH. Grab your White shirts and Jeans, get your tickets for 120 cedis and 200 cedis. Confirmed artistes on the bill include, Stonebwoy, Sister Derbie, Kuami Eugene, Kidi, Edde Khae and more. 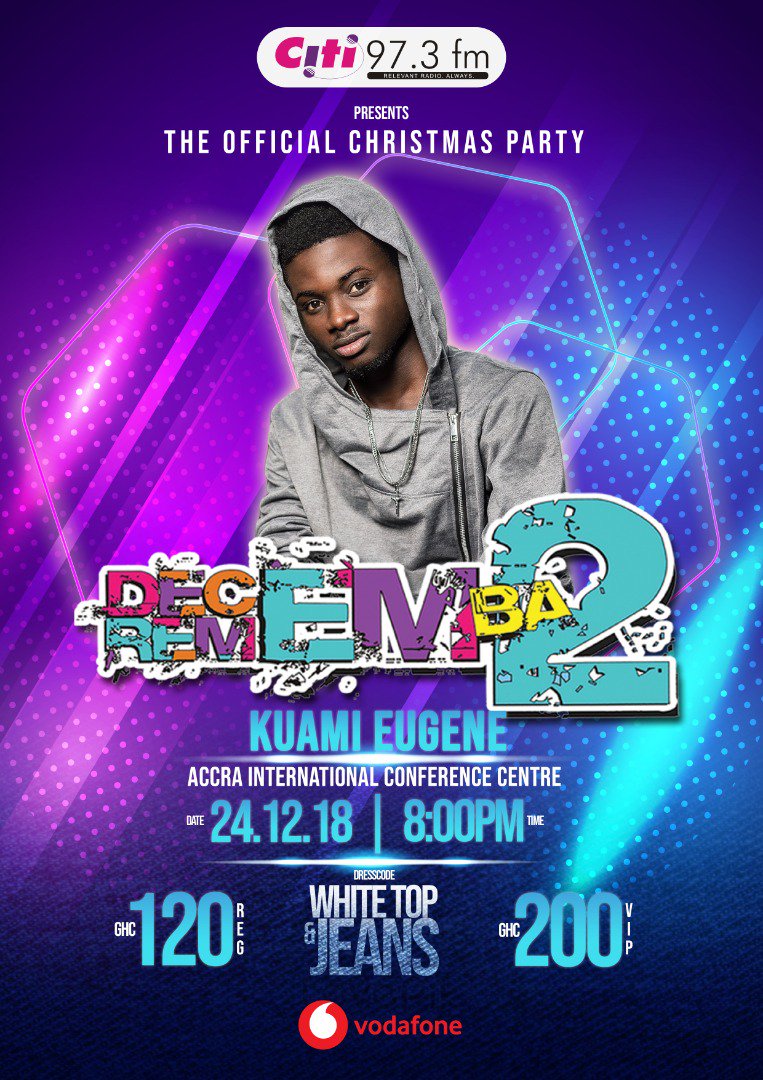 Sarkodie’s Rapperholic Concert on 25th December at the Conference Centre

The Ice Cream Fair on 26th December at Crystal Park 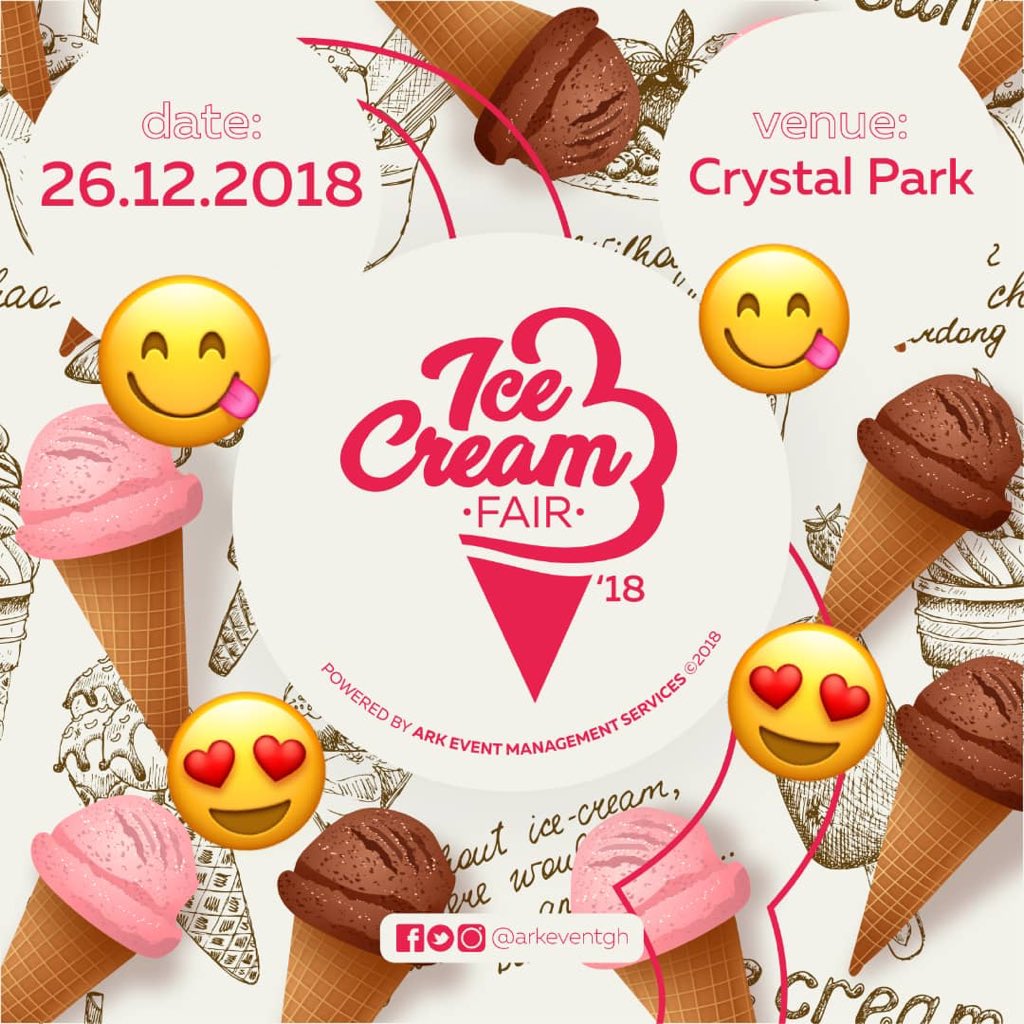 Its an all white cuban themed party in the hills. Here’s a look at their table prices so you get ready!!!!

Release the all year round stress at this show. All the finest comedians including Jacinta, Bovi, Foster Romanus, Akpororo and music artistes will be there to make you unwind properly. Tickets are going for 200 cedis (Standard) and 300 cedis premium. 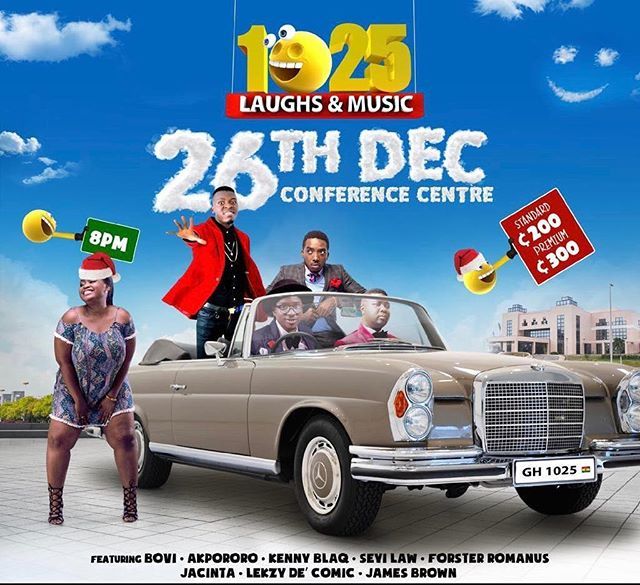 Afromania art and music experience on 27th December at Sandbox

December is the month of giving so how about you jam and spend money that will be sent to the Dunk charity.? Just pay 20 cedis as entry fee and you’re done! 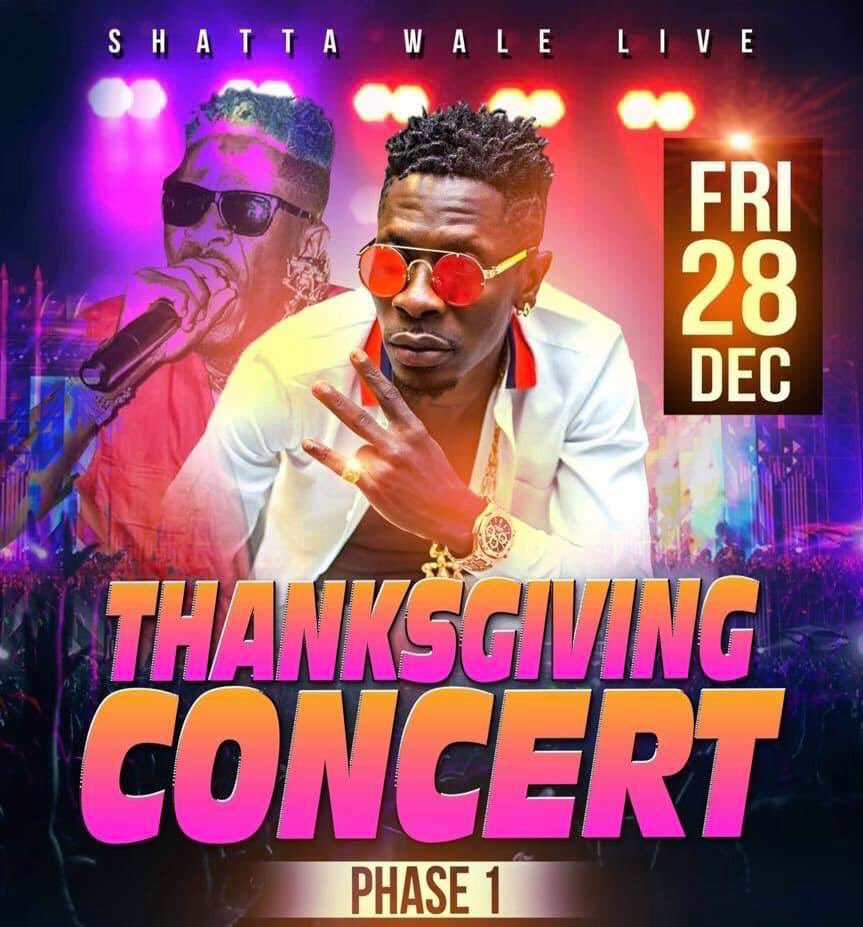 Everyone will be at Detty Rave.That’s all you need to know. Everyone in Accra will be there!! The early bird tickets are going for 100 and 300 cedis and You can get your tickets delivered to you at a flat rate of 15 cedis on 0501555101/0501555102. You can also purchase them online ( DettyRave.com ) and if you just want to get t yourself, all your info is below!! 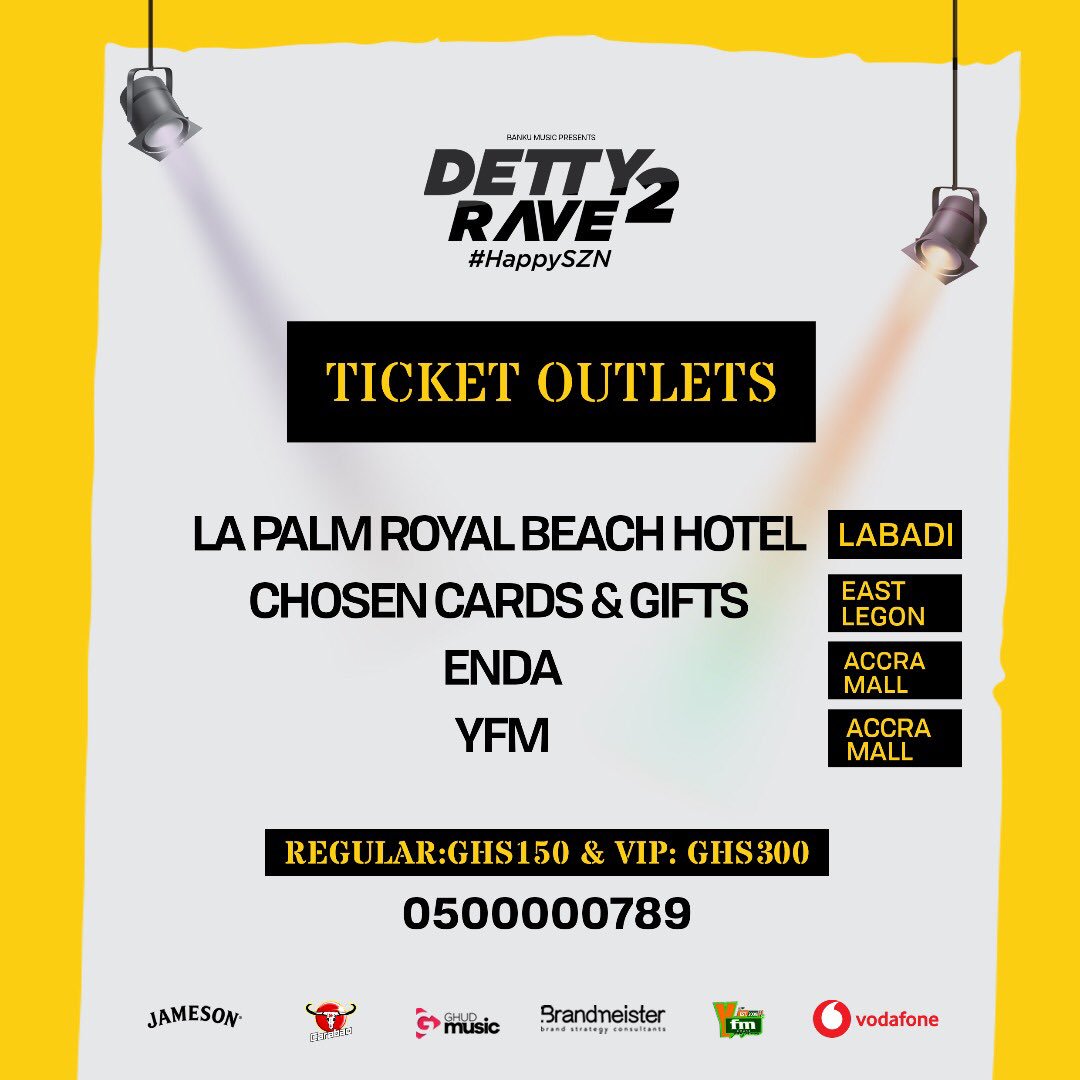 This is the only day party in Ghana and is already popular cos it puts a lot of focus on African culture. Tickets are going for 50 cedis and can be purchased on www.Afrochella.com or call 020531992.You can get them at the following places too! 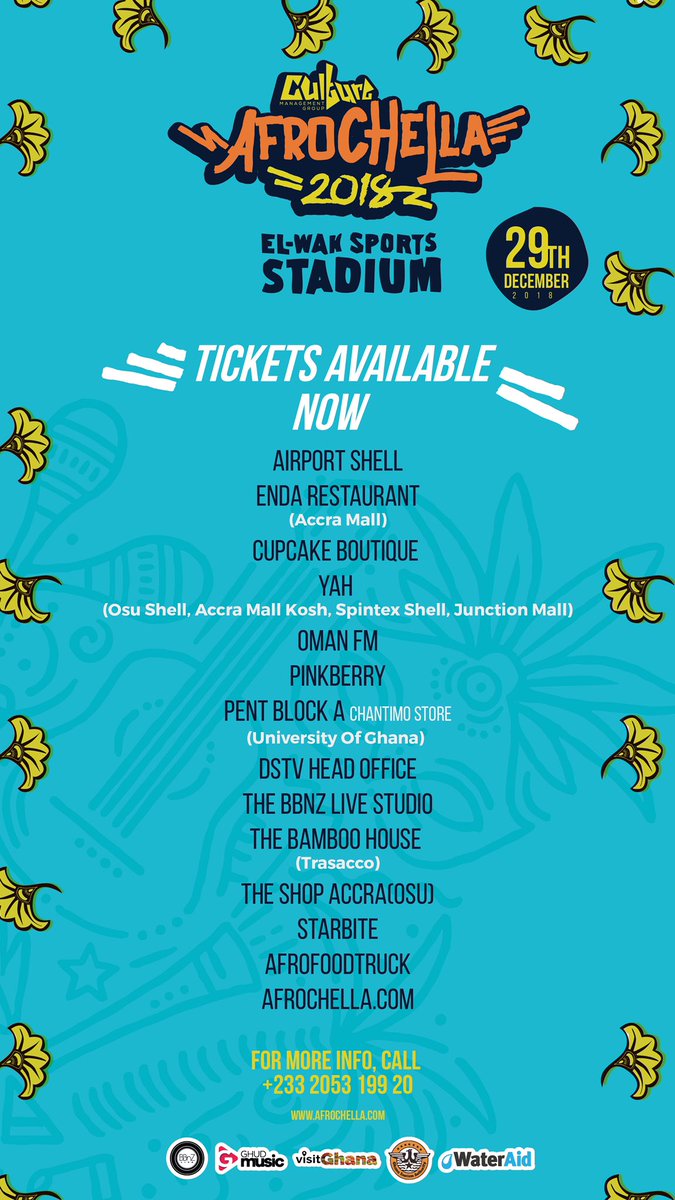 This year’s GH Rocks concert will have Jidenna, Burna Boy, Fuse ODG and a bunch of other Ghanaian artistes. Tickets are going for 150, 250 and 400 cedis and can be bought at Charterhouse, X-Men in East Legon and the Nallem stores in Accra, Osu and Junction malls.

If there’s any more, let us know!!