So after 18 long months of debates between the government and university authorities over who gets to manage the University of Ghana Medical Center, eventually delaying its opening – the UG Medical Center is going to be opened to the public.

While the heavily funded hospital lied dormant, it led to protests by students and other concerned citizens, and even a social media movement, #OPENUGMC now which took over Twitter and Facebook with many lamenting about the politics being played with the center.

What finally burst the bubble was the arrest of a bold individual.

See Also: University of Ghana Final Year Student Has Been Granted Bail After His Arrest For Advocating For #OpenUGMCNow

Reginald Sekyi-Brown, a pharmacy student of UG and resident of Mensah Sarbah Hall, was arrested after approaching the first lady with a placard on it was written “OPEN UGMC NOW”, this finally brought everyone’s attention to the plight of the center. 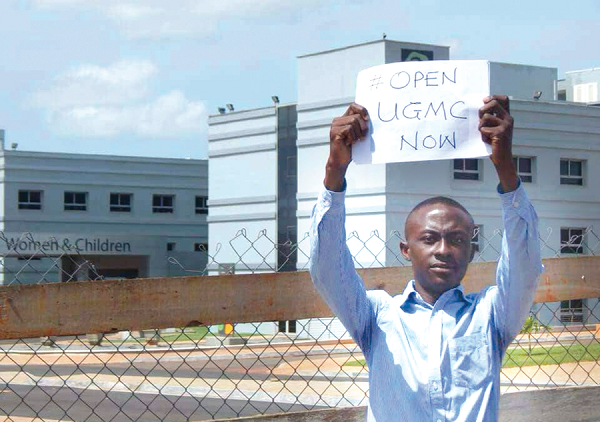 The emergency response center, outpatient department(OPD) and the pediatric wards of the 650-bed facility will be opened first.

The medical center was commissioned by former president John Dramani Mahama in September 2017 and will cater for the needs of people within and around the Legon and Achimota environs.

However, there have been concerns about access to the centre which is located in the university since patients coming in private vehicles or charted taxis from Achimota or Madina will have to use the Okponglo route.

A much easier and faster access route is restricted to authorized personnel only.