It’s indeed a sad Friday and we still can’t believe we have lost a fine gentleman. Our deepest condolences and thoughts are with the family and the entire nation. It will take some time for us to come to terms with the news.

This country has suffered some major losses in relation to high-profile personalities in the country. And some of these deaths are due to lack of well-equipped health facilities in the country, plus the virtually non-existent emergency response structure.

According to a Citi Fm report at the 37 Military Hospital, Doctors indicated that the gym where the Late Vice President was said to be working out had a resident doctor on duty but the gym lacked a defibrillator.

Plus the doctor reportedly was not able to carry out further First Aid actions because he needed more health professionals to manage the crisis.

The doctor, it’s said requested a transfer for the Vice President.

Even though the journey from the gym was just approximately two mins drive, upon arrival, the Vice President wasn’t responding to treatment.

Now to the question you probably might be asking, WHAT IS A DEFIBRILLATOR?

A defibrillator is an apparatus used to control heart fibrillation by application of an electric current to the chest wall or heart.

Heart fibrillation is an irregular and uncoordinated contraction of the cardiac muscle of ventricles. It is a common cause of cardiac arrest and is usually fatal if not reversed by defibrillation.

Here is how it works, quite technical.

As the name suggests, defibrillation stops fibrillation, the useless trembling that a person’s heart muscles can adopt during a cardiac arrest. Simply speaking, a defibrillator works by using a moderately high voltage (something like 200–1000 volts) to pass an electric current through the heart so it’s shocked into working normally again. The patient’s heart receives roughly 300 joules of electrical energy (about as much as a 100-watt incandescent lamp uses in three seconds).

The kind of defibrillator you see on TV consists of an electric supply unit and two metal electrodes called paddles that are pressed very firmly to the patient’s chest using insulating plastic handles (so the person using them doesn’t get a shock too). The important thing is getting the current to flow through the heart, so where the paddles are applied is crucial.

One way of applying them is to put one paddle above and to the left of the heart and the other slightly beneath and to the right; another method involves placing one paddle on the front of the body and the other around the back. In order for the electric current to flow properly, and to reduce the risk of skin burns, the electrodes have to be applied close enough together. They must also make good electrical contact with the skin, so a solid or liquid conducting gel is usually applied to the patient’s chest first. 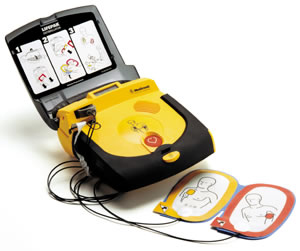 In units designed to be used by less-trained people in public places, sticky, self-adhesive electrode pads are often used instead of paddles for safety and simplicity: once the pads are stuck on, the operator can stand well clear of the patient’s body and that reduces the risk of them getting an electric shock.

Don’t over exercise yourself, Just stay fit and healthy.