For Antonio Guillem, the photographer of the “distracted boyfriend” meme, his models are like his kids. They have an emotional connection from years of working together and counting on each other.

So if someone makes a meme that disrespects them, he gets upset.

“What really worries us and we are not going to allow it … is the use of the images in a pejorative, offensive or any way that can harm the models or me,” Guillem wrote in a statement provided to INSIDER. “I’m talking, for example, about the image where their faces are changed by a dog face, a garbage bag, and a dog food bag.”

Guillem’s photo has been online, on the stock image site Shutterstock, for more than a year. In the past couple of weeks, it’s exploded across the web as a meme. The exaggerated facial expressions and soft focus makes it the prototypical stock image. And the social dynamic captured by Guillem and his models make the photo a metaphor for, well, pretty much anything if you put your mind to it — making it the perfect template for a meme.

Most of them, as Guillem acknowledges, are in good fun.

Guillem didn’t even know what a meme was.

Guillem, who’s 45 years old, told INSIDER that he’s been working as a professional photographer for stock photo agencies for five years now, often working 16-hour days in Spain, where he lives. In that time, he says, he’s become one of the top-selling stock photographers in the world, sometimes selling 1,600 photos a day.

When the “distracted boyfriend” meme started to gather steam, he didn’t think much of it. It’s not even one of his most popular photos. Guillem says the photo is purchased around 700 times a year, while his most popular ones have more than 5,000.

“I didn’t even know what a meme is until recently, when the models started to tell me about the memes that people were doing with our work,” Guillem said.

The popularity of “distracted boyfriend” — labeled on Shutterstock as “Disloyal man walking with his girlfriend and looking amazed at another seductive girl” — surprised him. But Guillem wanted to “focus on creating content that can be sold thousands of times” instead of paying attention to the “distracted boyfriend” meme photo, which isn’t as profitable. Because people are taking the image from other websites to share the meme instead of buying it with a proper license from Shutterstock, it’s not making Guillem much money.

“Memes haven’t given any us any kind of economic profit because most of the images haven’t been sold on the microstock agencies,” Guillem said. “The sales that are related with the memes are probably a 0.00000% of our monthly revenue. It’s not relevant.”

He just wants to make sure his models are treated respectfully.

Guillem doesn’t mind that people are using the meme without paying for the image. What worries him are “the extreme cases in which this good faith doesn’t exist.”

For people who edit the image that would be offensive to his models, he plans to take “the appropriate legal measures.”

Two of the models in that image are personally close to him and work with him exclusively. Their stage names are Mario, the male, and Laura, Mario’s spurned girlfriend.

“I care about them as [if] they were my kids. It’s not just saying, we have a real emotional bond that exists both inside and outside work,” Guillem said. “They know that we count on me for anything and the same about them.”

The meme started out with a different photo from the same session — and they seem to tell a story.

The meme, some people noticed, had a previous life. It started out with the same models (and, based on their clothes, the same photo session), in “Amazed unfaithful man looking another girl during marriage proposal and his girlfriend is angry.” The difference is that Mario is proposing. 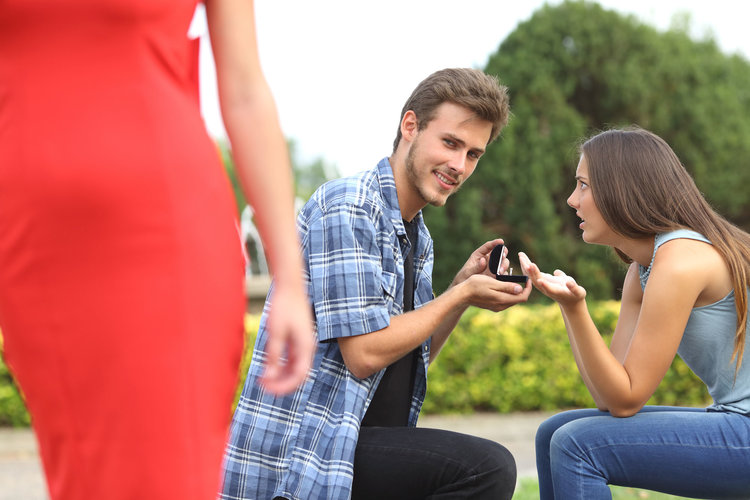 The meme has been around for awhile.

As the meme spread, people poked through Guillem’s other images and saw photos with the same models in different situations. Many of them racy. They began spinning a narrative from it.

Infidelity also seems to be a theme in Guillem’s work. 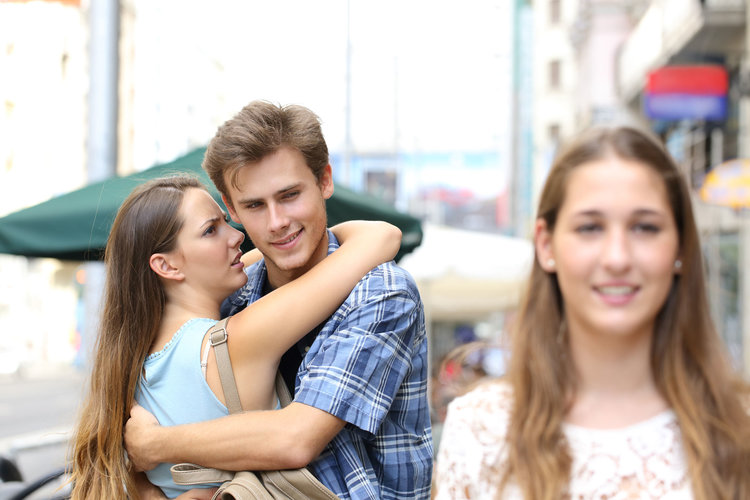 “Unfaithful man hugging his girlfriend while is looking another one in the street” had its own moment of virality. 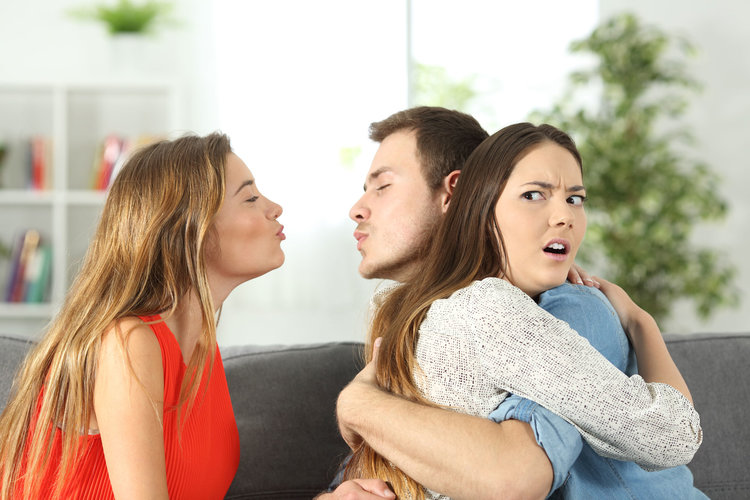 This one’s called “Girlfriend discovering that her boyfriend is cheating with her best friend at home.”

Guillem said there’s no magic to the storytelling that can be gleaned from his photos. He conducts photo sessions that revolve around different concepts. Mostly, though, he’s just looking at numbers to see what sells.

“The session took place in mid-2015 in Gerona (Catalonia, Spain),” Guillem said. “Because we were having a great sales response to our work, we decided to take a few risks planning a session representing the infidelity concept in relationships in a playful and fun way.”

The “disloyal boyfriend” meme went though the typical stages of meme-dom.

And, of course, there’s the meta-memes.

i am on meme levels unheard of pic.twitter.com/WaGYcXweGg

With all this in mind, it’s important to note something weird about the original picture. It may be the quality that makes it so enduringly funny.

This meme will always be undercut by the fact he’s checking out a girl who looks almost exactly like his girlfriend. pic.twitter.com/mVVbB5ON7g