Kuulpeeps – Ghana Campus News and Lifestyle Site by Students
Home Features These Two Sets Of Ghanaian Identical Twins Are Taking Over The US...
Facebook
Twitter
WhatsApp 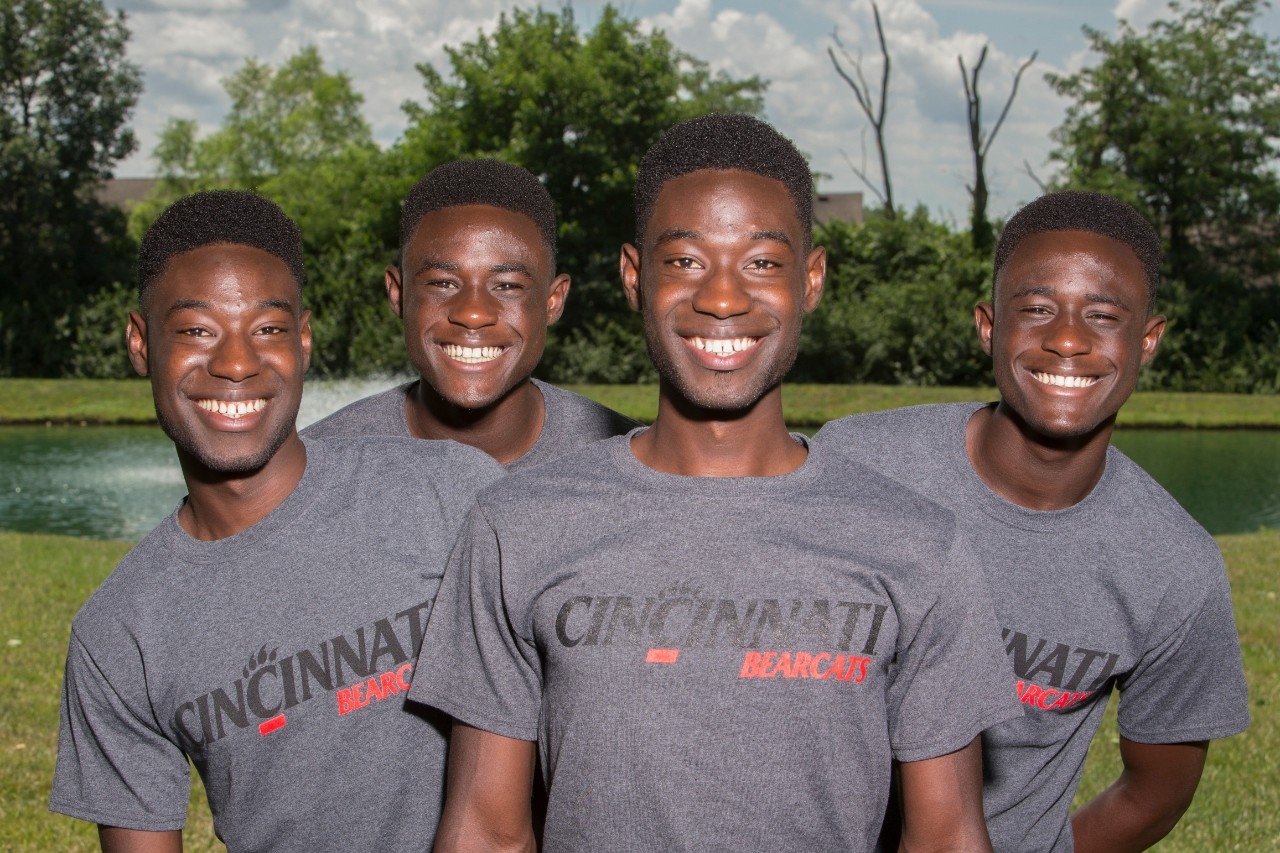 When the Mantey brothers left Ghana to continue their education in the U.S, they had only one familiar face on campus –– their own mirror image.

Since then, identical twins Alfred and Godfred Mantey are not only recognized for their shockingly similar looks, but especially for their parallel academic achievement at the University of Cincinnati (UC).

Starting this September, they will share the constant barrage of “double takes” on campus with their younger brothers Alvin and Kelvin –– also identical twins. 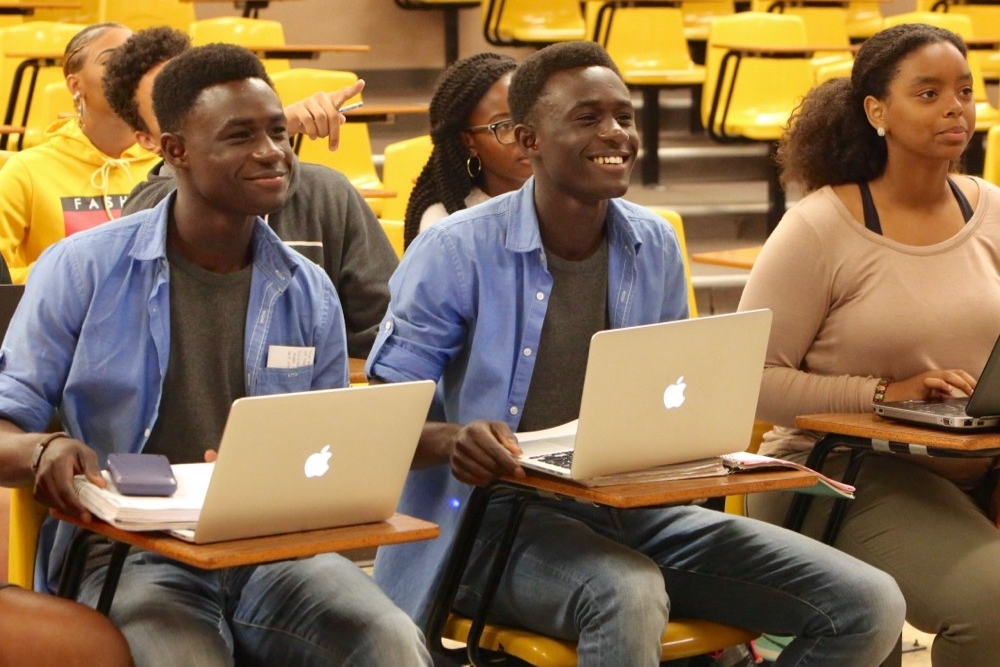 Arriving in the U.S. only three years ago from Ghana, the Mantey family has garnered a lot of attention for their unique family dynamic, but they say their life is more a story of perseverance, faith in God and staying focused on what really matters.

“We wanted our boys to have an American college education,” says Dorothy Mantey, mother of the twins. “With UC’s wide range of majors, top-rated programs and various colleges, the boys can fulfil their medical, pharmacy and engineering goals, and I can go back to school to get my lifelong dream of a nursing degree.”

That’s right. Five of the six Manteys now call UC home. And getting here was no easy feat.

As recent high school graduates and recipients of the Hamilton (Ohio) Community Foundation Scholarship, the younger twins will proudly join their brothers and mom this fall, having already sampled a taste of college life. 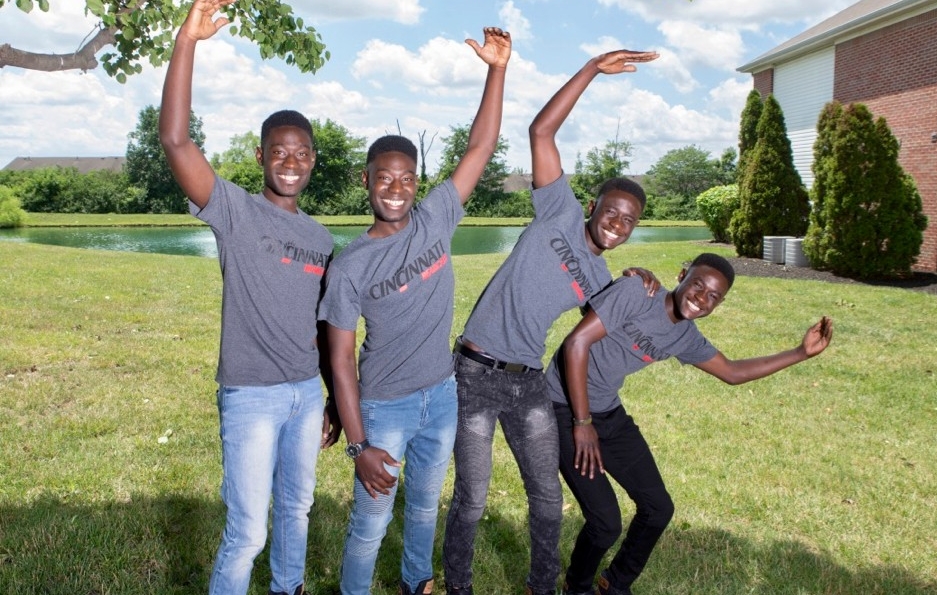 They occupied their days attending Science, Math and English classes and charming their classmates.

“We don’t really trick our friends,” says Kelvin, as he and Alvin enter their chemistry class in matching shirts and jeans. “But when we are apart we do respond to the awkward waves and hugs from people we don’t know, and we usually hug back anyway because we know they probably know our twin.

“One of our favourite things is the shocked reaction from our friends when we say the same thing in unison or finish each other’s sentences,” they both said at the same time. “Many people say, ‘Don’t do that, it freaks me out!’”

Twins are a rare phenomenon in the world and, according to the Twins Foundation, they account for approximately two percent of the general population. But the odds of two sets of identical twins in one family are less than one in 70,000, and the Manteys are the first documented double identical twin family to attend UC at the same time.

“It’s been nice to see on a few occasions that a set of twins have both chosen to study here at UC, but I have never heard of two sets of twins at UC all sharing the same parents,” says Adrian Hall, director of UC’s academic data.

As children, the ebullient bundles of joy got into double-double trouble and attracted their fair share of attention. As they grew, parents Dorothy and Stephen could see their unique intellectual talents unfold and vowed to give them the best education they could.

“We knew the best colleges were in the U.S. but it wasn’t easy getting the whole family over here at the same time,” says Dorothy. “My husband came first to the U.S. in 2002 with a firm to begin work as a home health care agent and to establish residency.”

But following in their father’s footsteps didn’t happen overnight. The Manteys explained the following years as a decade of lengthy and complicated red tape for obtaining American visas through the U.S. consulate in Ghana.

As a banker with a master’s degree in business, Dorothy remained in Ghana to raise the boys alone for almost 11 years until Stephen received his U.S. citizenship.

“We held strong to our faith and knew, if it was God’s will, we would eventually be together in the U.S.,” says Dorothy. “During that time I worked in the bank, educated the boys in private schools and communicated with their father by Skype and his yearly visits back home.

“By the time the older twins had graduated high school in 2013 our prayers were answered and we were granted a family visa for the five of us to come to the U.S.”

Finally together again, the grateful family found Stephen’s townhouse in Hamilton a very welcoming transition. All well educated and fluent in English, the new arrivals got to work immediately looking into their educational options.

The older twins applied to UC for the pre-pharmacy and pre-med programs and the younger twins jumped right into their freshmen year of high school.

“We came to America and one week later, started school at Hamilton Freshmen High,” says Kelvin. “We were shy and didn’t talk much that first day, but as we walked through the halls the other students came out to see this identical phenomenon.”

Before long, the bubbly younger twins had taken their high school by storm. At the suggestion of the school’s music director, they both sang and danced in the choir. 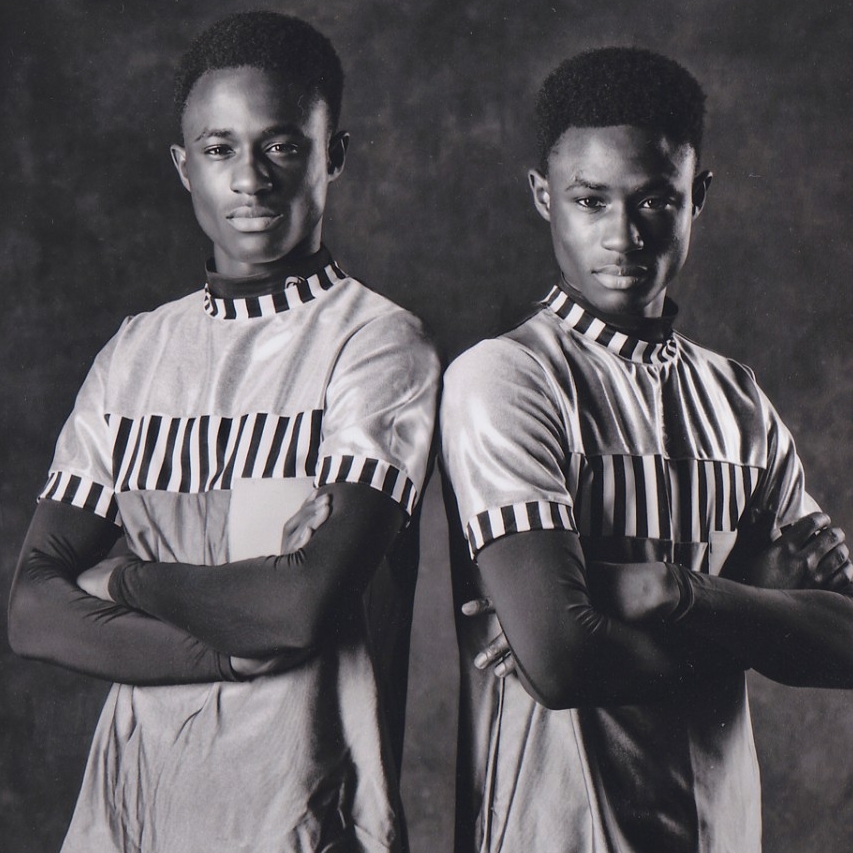 Both of them played football on the varsity team and in their senior year, Alvin was crowned homecoming king. 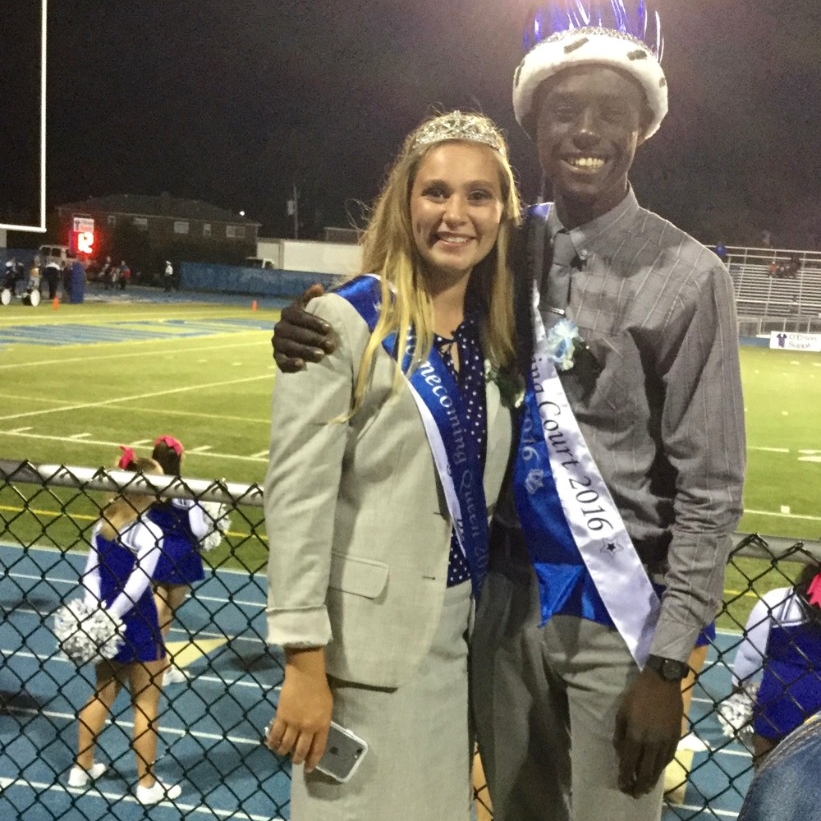 “Singing together is something we’ve always taken pride in as a family,” says Dorothy. “We all sing in the choir at our church in Fairfield and three of the boys even play instruments at King’s House Christian Center.”

By the time they graduated high school, the younger twins had given inspirational speeches about their story to the Hamilton Rotary Club and at Stephen T. Baden High School on “why perspective matters.”

In gratitude for speaking at a special ceremony in Hamilton on the National Day of Prayer, U.S. Congressman Warren Davidson presented the young Manteys with a flag that had been flown over the U.S. Capitol building. 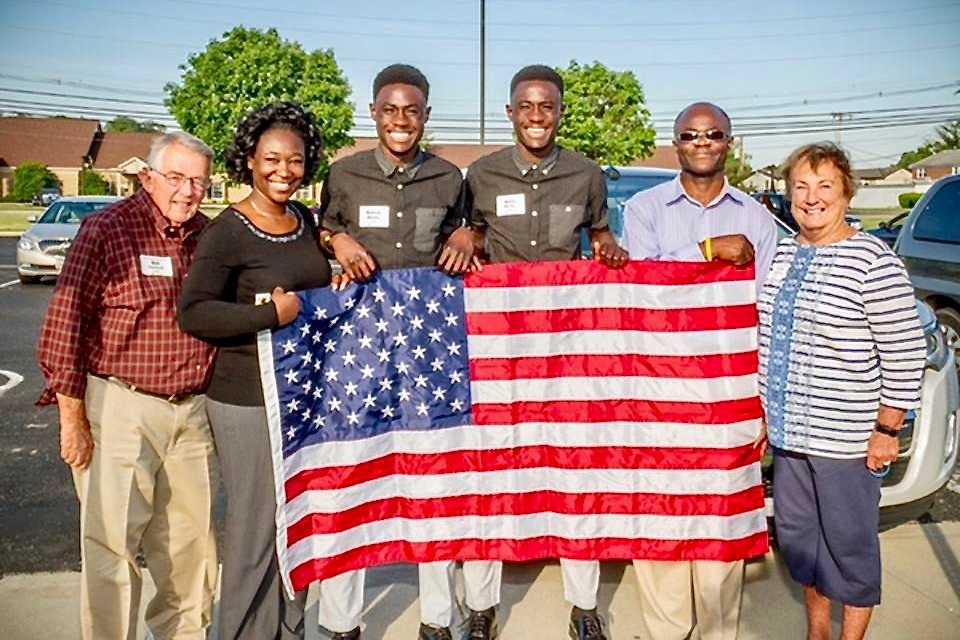 Bringing this talent to UC is one way the Manteys hope to show their appreciation, crediting God as the reason for their success. Their goal is to someday give back and make a positive impact on society. Those who know them say they already have.

The Mantey family’s loving mantra about faith in Christ, perseverance, and achieving against the odds eventually attracted the attention of the Hamilton (Ohio) Community Foundation Scholarship committee, endowed by UC College of Law alums Nathaniel and Paula Lampley.

“Originally, the committee awarded the scholarship to Alvin for overcoming adversity with a positive attitude, but when we met them we were so impressed with both of them,” says Nate Lampley, Jr., founder of the scholarship, who first met the students at the awards ceremony. “They are both energetic, inspiring and grateful and are well positioned for success.”

After falling in love with the whole family, especially for their resilience and determination against what many may feel were incredible odds, the Lampley’s invited them to their home and surprised Kelvin with an identical foundation scholarship.

“We were moved to tears when the whole family sang a song to us in gratitude,” adds Lampley.

As a biological sciences student, Alvin hopes to go to medical school for psychiatry.

“The Summer Bridge Scholars Program we just completed was great, we learned a lot,” say the younger twins. “We already learned things that incoming freshman will come to learn, so by the time the semester gets underway we will already know most of what we need through our first academic year. We will also get academic credit from the English classes we’re taking in this program.”

While keeping the boys well fed is one of Dorothy’s main objectives –– making home-cooked meals a top priority over eating fast food –– she still finds time to concentrate on her own studies.

“Now that the boys are old enough to drive, do their own laundry and stay on course with their studies, I was able go back to school myself now,” says Dorothy.

Her mother was a midwife back home, so Dorothy grew up knowing what it is like to work in a medical field and felt a strong calling.

“I didn’t have the luxury to go to nursing school in Ghana, as I had to start working in the banking field right out of college to help my mother financially,” she adds.

“Nursing is my passion –– I saw my mother in it and always loved it and now the accelerated program in UC’s College of Nursing has given me the opportunity to finally achieve my goal.” 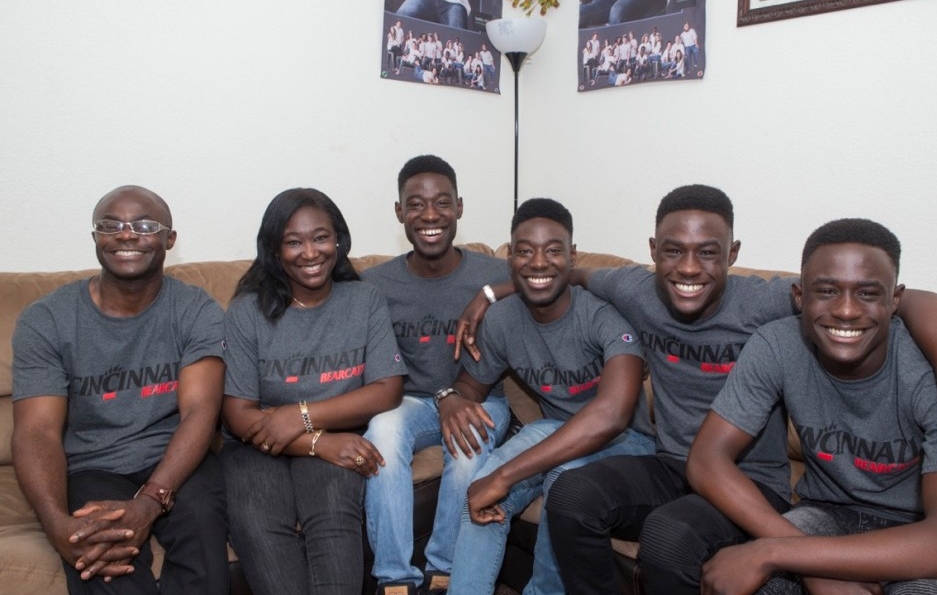 As seasoned UC students themselves, the older boys help set an inspirational example for their younger brothers by staying focused and weighing all the best options.

With three more years left to complete his studies in UC’s James L. Winkle College of Pharmacy, Godfred is mulling over whether he will go into pharmaceutical research, clinical pharmacy or retail. Alfred is entering his senior year of pre-medicine and plans to take a gap year before he goes into medical school to save money.

To help pave the way into UC’s study abroad options, they all plan to investigate UC’s Nationally Competitive Awards for further scholarship help and look forward to applying this fall. 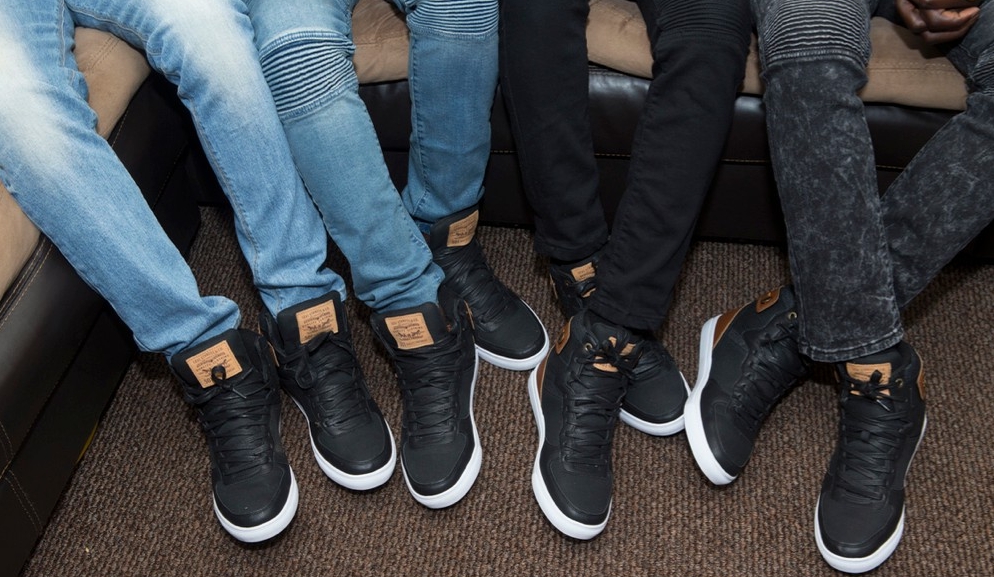 With the help of donated furniture and newly acquired student loans, all four boys will leave the comforts of home this September and share a two-bedroom apartment near campus.

“But we’re still close enough to drive home on weekends for our mother’s home cooking,” they all say in harmony.

While many twins see college as a time to break away and live in separate places or venture off to different colleges, the Manteys want to stay together, each saying it would be like leaving a part of himself behind.

“And attending UC still comes with enough separation,” say the older twins. “With all of us in different programs we won’t see each other during the day unless we make a point of it.”

No matter how busy their schedules get, they will always make time to get together to laugh with friends, especially when their “twin telepathy” is particularly in tune.

As far as girls and dating go, Dorothy reminds them that dating will have to wait until after they graduate. With that, a wry smile spread across all four faces.

UC, these Kuulpeeps are coming for you!!