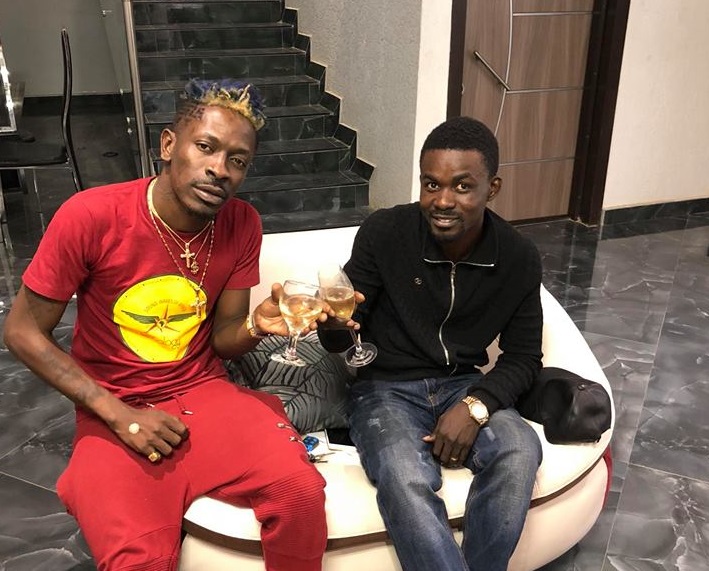 People, we have been telling you for some time now that self-proclaimed Dancehall king, Shatta Wale will be signed to the Zylofon Media label soon.

It has been a music industry secret that Shatta Wale is a Zylofon Media artiste, just that the contract had not been signed as a result an official announcement could be made.

However, moments ago, Shatta Wale asked the Shatta Movement to meet at the Zylofon media office.

“SHATTA MOVEMENT LETS MEET TMORO 12pm AT ZYLOFON EAST LEGON…LET’S DO THIS THE SHATTA MOVEMENT WAY,” he said in a Facebook post accompanied with a picture of himself and Nana Mensah Appiah, CEO of Zylofon Media.

The two held champagne glasses, probably for a toast after the deal was done.

According to reports, Shatta Wale’s contract comes with $1.5m money agreement including a car and a house.

We just told you about how Nana Mensah Appiah, the CEO of Zylofon Media posted a picture of  a Rolls-Royce on Instagram with the caption “The headlight of this RR looks like Shatta wale’s eye, doesn’t it??”

See Also: Is Shatta Wale Adding A Rolls-Royce To His Fleet Of Cars?

After tomorrow, the Shatta Movement and Bhim Nation will be under roof.