The US Embassy Ghana is embarking on some form of public relations in the hope to counter the effects of the President of the United States, Donald Trump’s recent utterances.

By now, you would have heard that Trump doesn’t want people from Shithole countries to immigrate to the United States.

Well reportedly, specifically called out Haiti, El Salvador and the African continent as being shitholes.

According to US media, Trump wants people from Norway to immigrate to the United States.

Trump’s comments sparked outrage online. While people in Norway sent Tweets saying that nobody from their country would immigrate to the US, the African Union also took a firm stance asking the US President to apologise for his comments. 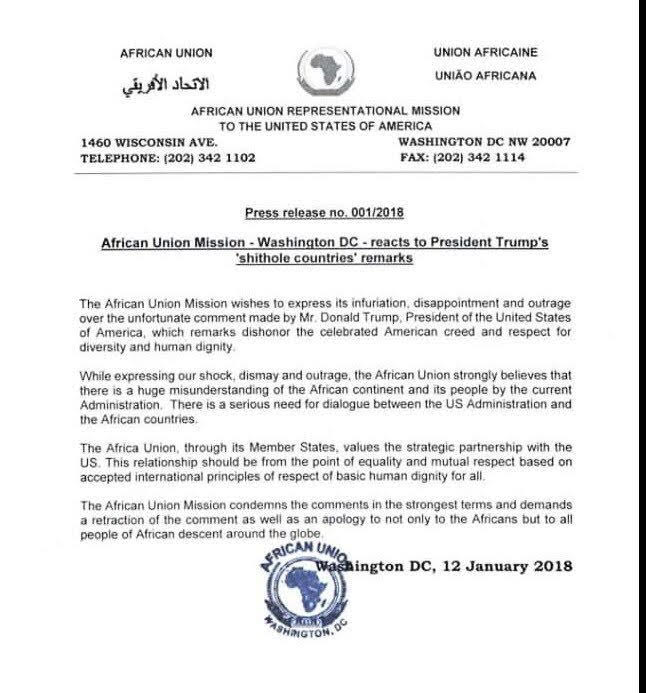 With many Ghanaians taking to social media to condemn Trump for calling African countries “shithole countries” the US embassy Ghana have taken it upon themselves to do damage control.

“We have great respect for the people of Africa. Our commitment to Ghana and all our African partners remains strong. It’s an honor for our staff to serve here alongside Ghanaians, and we deeply value our relationship with them,” their Tweet read.

We have great respect for the people of Africa. Our commitment to Ghana and all our African partners remains strong. It’s an honor for our staff to serve here alongside Ghanaians, and we deeply value our relationship with them.

Meanwhile, Donald Trump has also taken to Twitter to tell his side of the story. He claimed that he never used the “shithole” to describe the countries in Africa.

“Never said anything derogatory about Haitians other than Haiti is, obviously, a very poor and troubled country. Never said “take them out.” Made up by Dems. I have a wonderful relationship with Haitians. Probably should record future meetings – unfortunately, no trust!,” his Tweet read.

However, early this morning, he sent another Tweet that read “I, as President, want people coming into our Country who are going to help us become strong and great again, people coming in through a system based on MERIT. No more Lotteries! #AMERICA FIRST”

On the other hand, Ghanaians don’t seem to be impressed with the public relations trick the US Embassy Ghana pulled on Twitter.

Sadly nothing in this tweet indicates your show of disapproval for what @realDonaldTrump said. There's no apology of a sort. It would have been nice to at least issue a statement which clearly indicates you distance yourself from what your President said.

Condemn what your president @realDonaldTrump said before u say whatever u have to say.

Is that a way of apology to the people of Ghana n (Africa) as a whole.
They should come again.

How do you reconcile this with what your president said.Don't you think Mr trump should be apologizing by now

Anyway, we are still waiting on the African Union. What will they do if the Donald Trump apology doesn’t come?