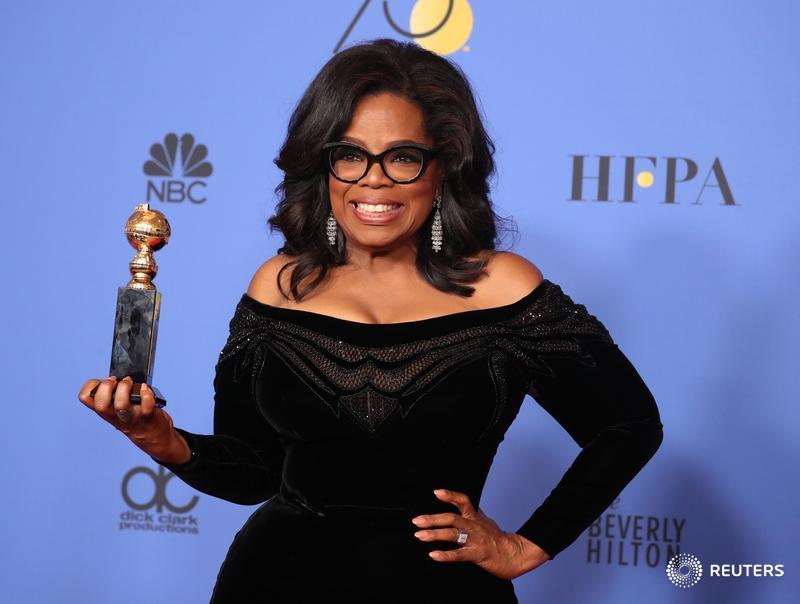 Yes, Oprah Winfrey is a superstar; on an average day she does get a lot of people talking about what she is doing or not doing.

But this morning, you might have seen a lot of Oprah Winfrey related posts on your timeline.

Obviously, something amazing happened and since its Oprah, you’ve got to know it’s a huge thing.

Last night Americas super rich and A-list celebrities gathered to tell themselves how amazing they all are and applaud each other for an amazing 2017- at the Golden Globes.

The Golden Globes awards are accolades bestowed by the 93 members of the Hollywood Foreign Press Association beginning in January 1944, recognizing excellence in film and television, both in the United States and abroad.

And yesterday’s Golden Globes was no ordinary one. Aside the fight against sexual assault and harassment and a support to the #MeToo movement themed show – former US Talk show host and currently a budding actress, Oprah Winfrey was honoured with the Cecil B DeMille Lifetime Achievement Award.

In 2018, Oprah is the first African American woman to win this accolade.

The Cecil B. DeMille Lifetime Achievement Award is an honorary Golden Globe that is awarded to people in recognition for their outstanding contributions to the world of entertainment. Past winners include Walt Disney, Clint Eastwood, Morgan Freeman, George Clooney, Denzel Washington, Meryl Streep and others.

While Oprah made history last night, she took the opportunity to deliver an amazing speech and subtly took a swipe at US President Donald Trump and powerful men who sexually abuse women.

“In 1982, Sidney received the Cecil B DeMille award right here at the Golden Globes and it is not lost on me that at this moment, there are some little girls watching as I become the first black woman to be given this same award. It is an honour– it is an honour and it is a privilege to share the evening with all of them and also with the incredible men and women who have inspired me, who challenged me, who sustained me and made my journey to this stage possible,” she said.

“So I want tonight to express gratitude to all the women who have endured years of abuse and assault because they, like my mother, had children to feed and bills to pay and dreams to pursue. They’re the women whose names we’ll never know. They are domestic workers and farm workers. They are working in factories and they work in restaurants and they’re in academia, engineering, medicine, and science. They’re part of the world of tech and politics and business. They’re our athletes in the Olympics and they’re our soldiers in the military,” she said again.

Usually after such award shows, what all of us talk about is who wore what, best and worst dressed and the who won what – but today, Oprah stole the show.

Congratulations @Oprah! You are an incredible role model. Thank you for your inspiring and moving words and for everything you have done for me personally. You have changed my life. ❤

I am so moved to witness the solidarity of women and men everywhere, across all industries, unite in their support of women and girls all over the world. Thank you @oprah for inspiring us all! x VB #TimesUp #WhyWeWearBlack #GoldenGlobes pic.twitter.com/1eMzLzjZJB

Then came the call for Oprah to be the President of the United States.

Oprah Winfrey should be president

Oprah Winfrey is such a Kuulpeep.