Well, Well, we suggest you get your cups ready for this Tea that we are about to spill. We smell a scandal brewing!!. So last week we reported that Meek Mill was sentenced to 2-4 years for violation of probation, yes 2-4 YEARS !! when we have rapists getting sentenced to 6 months in prison for raping unconscious child.

So we are wondering, is the american criminal system really justice for all? absolutely not, and don’t come argue with me either cause i have facts for days anyways  back to the topic at hand. As much as we would love to make this a race thing this time around is not the Judge in this case is also an African American women you would think she will stand up for the struggle and put an end to sending African American men to prison over small things but noo she on her groupie vengeance(we will explain what we mean by this).

But wait do you guys know what probation is?

Probation is a form of sentencing after you have served your prison time. It is when the government control your life  they well, one person which is your probation officer tells  you what you can and can not do for a duration of time I.E five years or less it could be more. And violating the probation terms can land you in prison depending on the nature of the violation and how often it occurs.

Okay so Meek Mill was on probation and he was charged for violating his probation terms. But what did he do that caused such a harsh violation sentencing? He popped a wheelie to entertain the kids at his concert, he broke up a fight at the airport between officials and his crew members and showed up to a concert which is his job. Shady right? Yes and to make matters worse the violation charges were dismissed in court by his probation officer. But this judge, Judge Genece Brinkley decided to sentence him to 2-4 years because she is mad, she abused her judicial power in this case she making things personal. She is upset because she asked Meek Mill to give her a shout out in a song, remix her favorite Boys II Men song “ON BENDED KNEE”  and  he refused.

According to TMZ, Judge Genece Brinkley is also reportedly being investigated by the FBI for possible relationships she might have in Philadelphia including one with a local music mogul, Charlie Mack, whom Meek worked with early in his career, she allegedly asked Meek to sign with.

This  sentencing is completely biased and Meek’s lawyers, fans and colleagues are not taking this lightly. there has been petitions and protests all over the internet and the city of philadelphia and it seems like the FBI  have taken noticed, she is now being investigated. 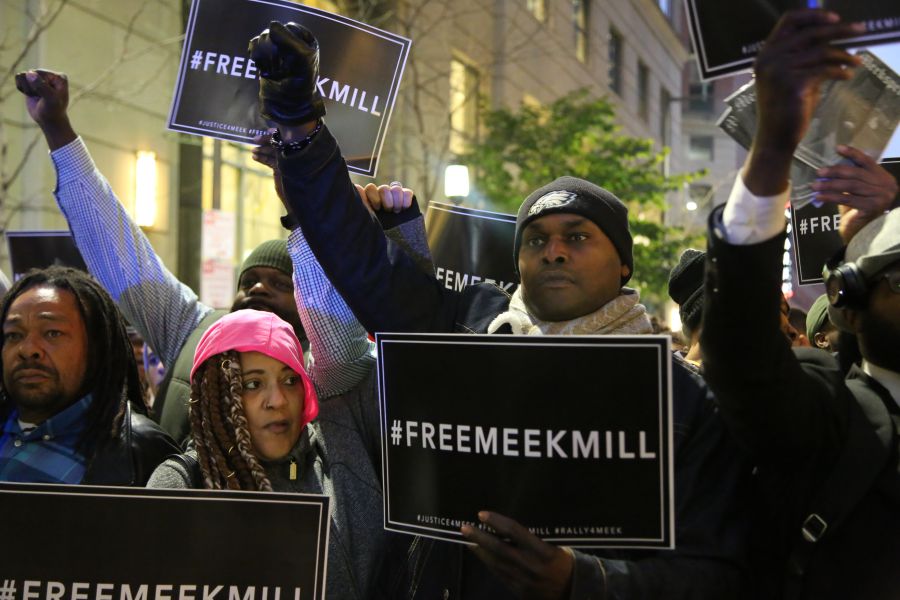 “This is an investigation looking into a possible extortionate demand,” a source told the Post of Brinkely. “Undercover agents have been in the courtroom monitoring the Meek proceedings since April 2016″.

As you can you can things can change when we all come together for a cause. We are hoping things work out fast and his sentencing gets reversed so Meek Mill can come to Ghana for December.  In the mean time Dj Mic smith has released a #FreeMeekMill mixtape for all the Meek Mill fans to soothe our hearts.