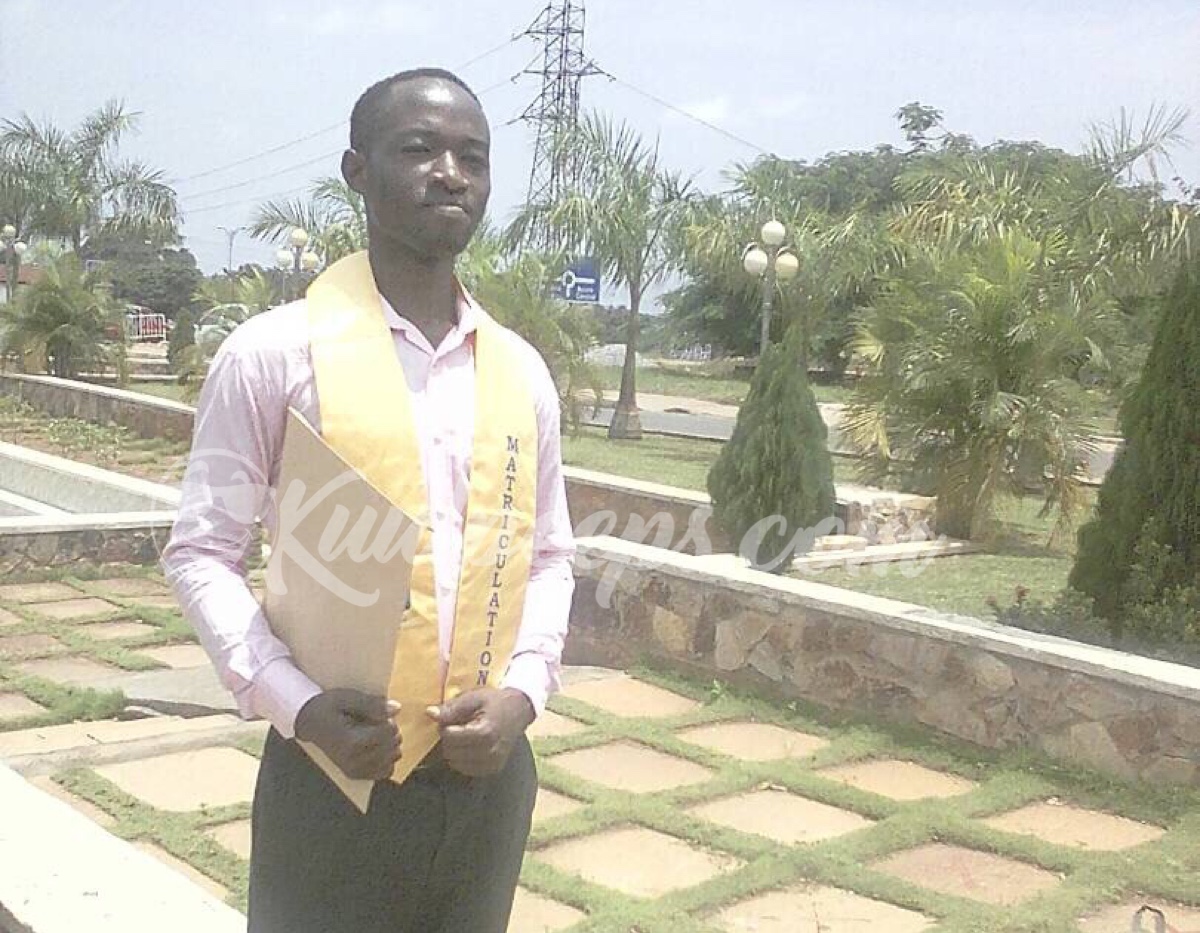 He single handedly founded a foundation called the Challenge to Change Foundation (CCF), which seeks to end child marriage and at the same time, tackle teenage pregnancy and also educate children. Kuulpeeps Legon met with him because well, if someone’s being amazing, who else but us to find them?

So you came all the way from Bawku to the Unversity of Ghana. Why this particular University?

Patrick: Actually when you are searching for something you really like, no matter how far it is, no matter how difficult it is to get it, you have to try your best to reach there. When I was in SHS, I admired the University because I used to hear a lot of stories about the performance of the University of Ghana and about it being the best University in Ghana. These stories inspired me and made me study a lot to actually get here.

Which Senior High School (SHS) did you attend?

Why don’t you tell us about your foundation?

Patrick: The Foundation is called Challenge to Change Foundation (CCF). It’s on the course to end child marriage in the Upper East Region. We hope to beat our deadline of ending child marriage before our deadline in 5 years. Currently we are operating in two districts: Bawku West District and Bongo District. We are hoping to expand to other districts within one year of operation. So after we obtain our results, assess our performance, then we add some other districts.

How long have you been in operation?

Patrick: We are just 9 months old.

And how did you get the inspiration to start something like this?

Patrick: The fact is I didn’t have the plans to start this foundation at all. I have always been interested in these clubs and projects. I was part of some clubs and societies mostly just to contribute my quota to the society. When I completed SHS in 2016, I went to Kasoa to work but while I was there, my sister got pregnant and that made me go back home because these girls are such that, once they get pregnant, they find every means possible to terminate the pregnancy and in the end, risk their lives and the lives of the unborn too. So I went there to make sure she delivered safely and went back to school.

How old was she?

Patrick: She was 16. She’s almost 17 now. It was my parents intention to get her married as soon as possible and that was one of the major reasons why I had to rush home. You see, the parents sometimes feel that the burden of the baby will be on them. So to avoid this, they try to marry them off quickly. Luckily, I was able to prevent that and as it stands now, she’s back at school. Our house isn’t far from the school so she’s able to take care of her baby easily and go to school as well.

How was it like putting your idea into motion?

Patrick: Actually, as I said, I was in Kasoa doing menial jobs when I heard she was pregnant.  So while in Kasoa, I was communicating with my friends in Bawku and motivating them and making many calls to organize them. It was actually very difficult for them to believe that I was serious about starting this at first so I had to go through a lot before they finally believed me and started helping. Later, I went back home and we wrote some letters for some assistance because we needed permission from GES to be able to go to the various schools to talk to the students. We also needed permission from the Community Assembly members and then the District Assemble as well before we started operating. Fortunately, we got their support and then we started.

Patrick: We started from Bawku West; there were 7 of us at the time, but now we are 206 including senior officers and other people across every region. The 7 were actually my mates from SHS and the rest were my mates from different Senior High Schools in the region. The 7 were mainly my friends; all outstanding students. One of the guys was actually one of my fiercest competitors in SHS. Our assistant School Prefect from SHS is also a part of us. They are all brilliant students with inspirational backgrounds who speak well. They are also actually popular people that the community has heard of but never seen, so when they see us, our presence alone is some sort of inspiration to them

Ei then you guys were some popular sharks

Patrick: (laughs) it’s because we used to attend quizzes in the district for our school. We were winning quizzes and most of our surrounding schools for instance used to hear of me so yeahh I was popular small. Most of them usually want to see who Patrick is, but because of the financial situation at home, I’m mostly in the south working. But when I go home, I help teach in my Alma Mata and I also visit some of the schools. So basically, I just got friends that are outstanding in leadership and academics and we started this. The 206 are all across the country. Most of us are from Upper East but there’s a GHANAS teacher I met in 2015; we became close and I told him about the foundation. He believed in the cause and joined.

Is your only objective ending child marriage?

Patrick:  We were actually trying to do it in two ways: ending child marriage and also, helping these children improve in the areas of Science, Mathematics and Technology. We know Math was is a headache for students, especially the girls so at least helping them and giving them hope will enable them learn. After all we are trying to end child marriage to also eradicate the level of abject poverty here so if we are ending child marriage, then we should also try progressing them in the areas they struggle in to make them make better future choices.

How well do you think you guys are progressing? Like are you moving forward or you’re waiting for some big money to get you moving?

Patrick: In the earliest stages, I used to spend all of my time working on the project to know the statistics concerning teenage pregnancy. My region actually recorded the highest in child pregnancy. I had no idea!! We had the highest of 5,587 cases in 2016 out of all the regions. At least knowing these needs help us cos once we are able to satisfy these needs, then we are well on our way to achieving our goal. Most see it to be impossible. At the moment we are operating but we are still doing our statistics etc., so for now we are sensitizing and all but we don’t have the accurate number of girls in the community to measure against what we have been able to do. So currently, we are working on that. We will then know if we are making progress and tackle our weaknesses. So by January 2018, our 5 year clock will start reading.

Is it easy getting help?

Patrick: These officials and authorities, they seem so busy so when we write letters, we wait for a long time. They keep postponing but in the end, we get the support we need. For now, for the other 11 districts, we haven’t obtained permission from them yet. We hoped to start with the 11 at once but we decided to at start with the two districts we are working on now and then spread down. And even with the two districts, it’s not all the communities we’ve been able to reach.

How do you get financed to do all this work?

Patrick: We have our Board of Directors, friends and family who pitch in to help with vehicles and finances. But at the early stage, I was the one supporting it with the money I made from the odd jobs I did in Kasoa.

Do you think you are making an impact on these children?

Patrick: Yes we are! We tried getting the support of the community because you know, it’s hard getting to the children if their parents aren’t involved so we had a way of getting the parents to support us and get involved. So now, even in our absence, they’ve become like watchdogs to make sure that their daughters don’t get involved in anything that will lead to pregnancy.

What are some of your challenges?

Patrick: Our major challenge is, sometimes the very people we are fighting for, feel like we are against them. Some of the girls don’t appreciate us telling them to hold on, abstain etc. we are currently working with the District House of Chiefs to pass some by-law concerning child marriage and teenage pregnancy. They tried some time ago but they weren’t able to enforce it but we,CCF are here and willing to enforce it. So if the by-laws are passed and there is still a large number of teenage pregnancy and child marriage cases, we will not take it lightly at all and even involve the Ghana Police.

What kind of people are you looking to get help from?

Patrick: This is a problem in the whole country so we will like some support from the Judiciary to pass some laws concerning this to affect everyone. Left to me, instead of making 18 the ‘adult’ age, I’m looking at 20 plus!

What are your other plans considering the fact that you’re studying chemistry?

Patrick: I have in mind to start a basic school in 3 years’ time. My motto is, “impossible is not a scientific term”. I am poor but I believe in my ability that in 3 years, I will be able to start a structure. 48 people wrote BECE, and only 5 of them could go to SHS. Almost all of them had to write NOVDEC before going to the university. So where’s the problem from? From the foundation. My school will teach them well and make their foundation stronger. In JHS, most teachers avoid Chemistry, because even they consider it as a difficult subject. I just want people to love the subject like I do.

I see you have a lot of passion for this work. What keeps you going?

Patrick: For me, it’s not just about me but the society as well. The Lord Jesus Christ didn’t come to make money. He said “if I be lifted up from the earth, I’ll draw all men near me”. He will draw all men near him meaning he will make us like him not the worldly people. So sacrificing for the society is what I’m interested in. Money made from my school will be pumped into the foundation. We are actually hoping to register it as an International NGO.

So Guys! If you’re interested in what Patrick is doing and want to know more or support a brother!!! You can check out his website here