The music business is getting tougher as the days go by.

It’s increasingly becoming harder for a new artiste to break into the industry and make a name for themselves.

However, irrespective of the fine tunes musicians release on a daily basis, the make or break moment for most of them is when they perform live on stage.

No… not miming to pre-recorded beats… Just live music with a band. If the band stops and the mic goes off, that’s the end of the music.

Performing music live on stage allows the musician to explore varying alternatives to their own songs.

To be able to take one’s own song and turn it into a whole new banger on a live music performance stage shows the mark of a true artist.

To celebrate this rare opportunity, Echo House produced Nitro, The Live Sessions to give musicians the chance to perform live.

Nitro, The Live Sessions is a YouTube musical show where Ghanaian musicians show us a different musical side to what their fans know.

Others such as Pappy Kojo, MzVee, Gasmilla, Luther, Akwaboah, Adomaa, Cabun and Kings Kid brought their ‘A’ Game to Nitro, The Live Sessions to prove that they are worth their sort.

Starting on the 3rd of November, 2017, you’ll finally see what we’re talking about. 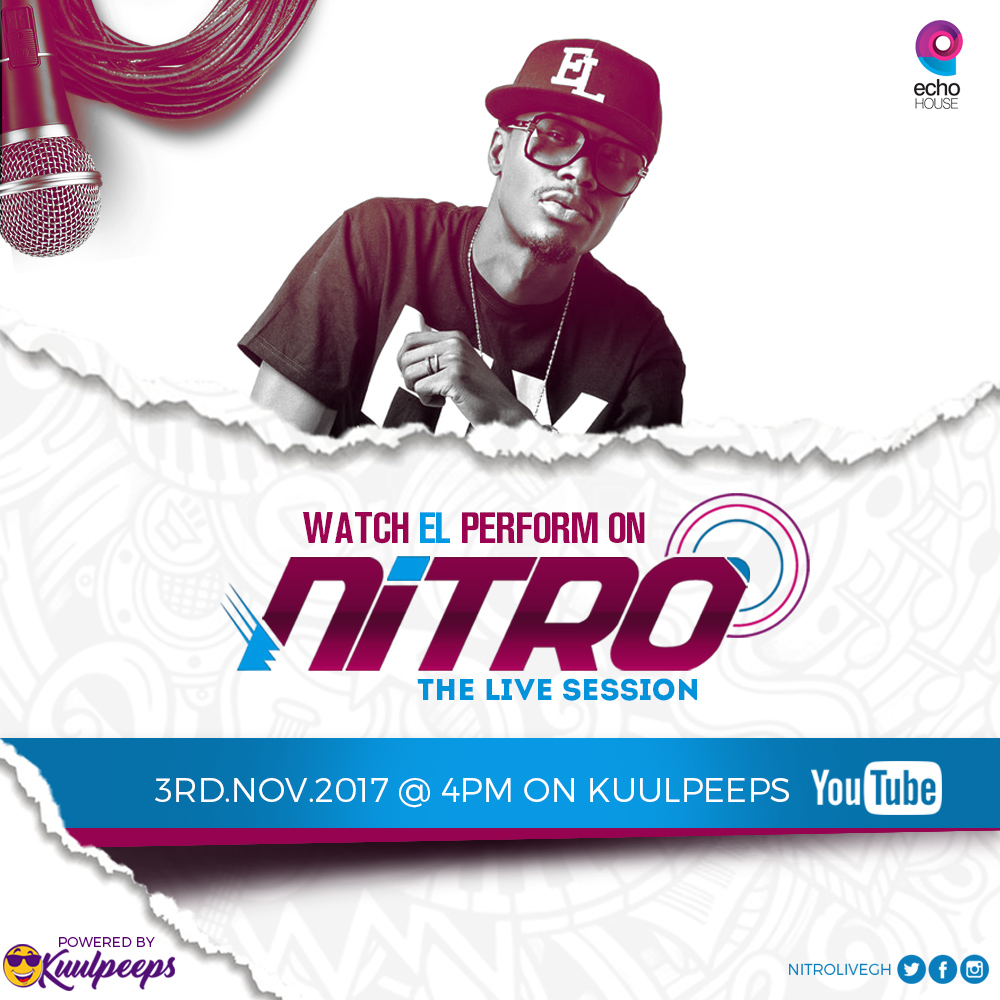 Hip Life artiste, EL will be leading the pack. Mention EL, and a rapper comes to mind. At his core, he is undoubtedly a rapper but while on Nitro, The Live Sessions, the EL we knew wasn’t on that stage.  All of us know “Shelele” has an Azonto rhythm but EL made a whole new rhythm for this song. While performing live on stage, EL’s voice becomes this transformational spiritual entity that carries the upbeat musical rhythms of his hip-hop tracks into this almost serene spiritual zone of highlife music. 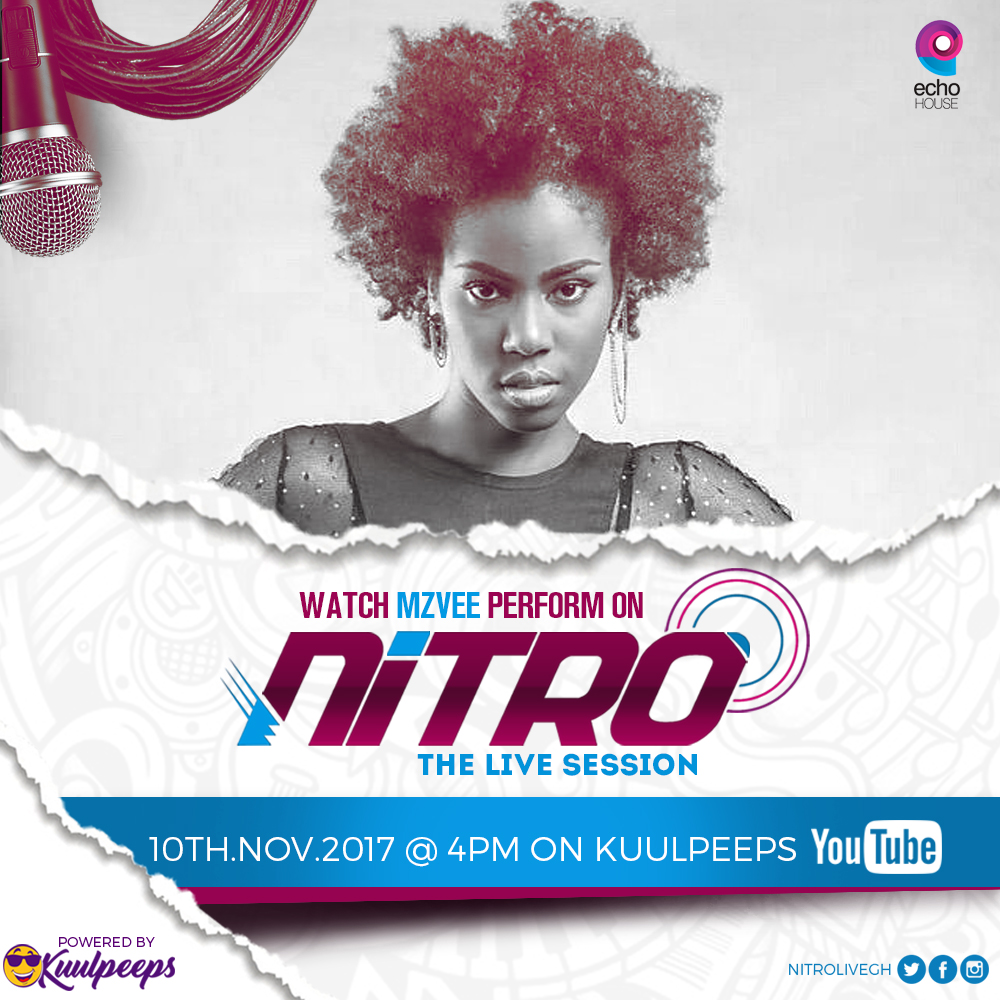 The queen of Ghana Dancehall was at her best on Nitro, The Live Session. From ‘Revelation’ to ‘Natural Girl,’ MzVee showed why she’s the best. She has so much energy that you can’t help but join her dance. 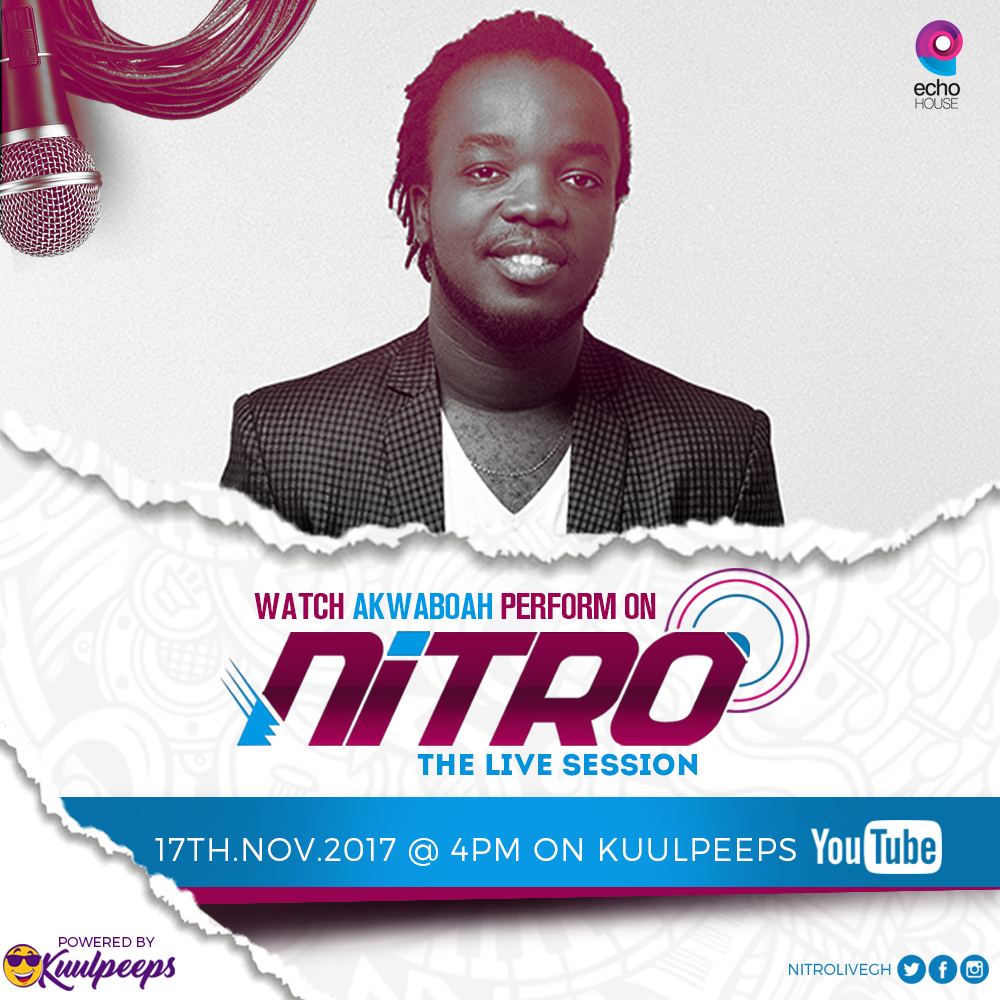 He comes from a family of music makers. Singing and songwriting are his forte. Very few people are able to combine, singing, writing songs and performing live on the stage like Akwaboah does. When it comes to Nitro, The Live Sessions, this young protégé is just in his space and comfort zone. While performing his song “Nsroma”, Akwaboah was able to move the live studio audience. He was able to carry them along to a point where they sang every word with him. 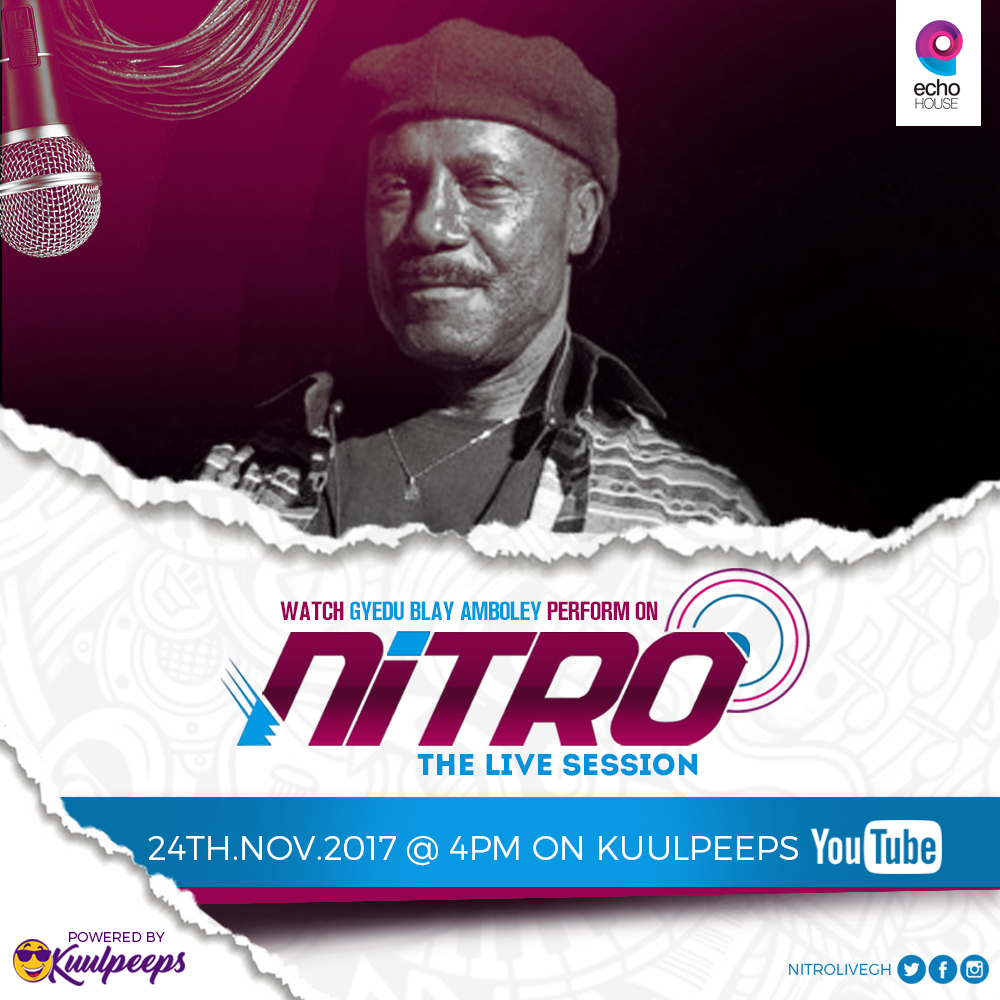 With him, it was strictly music from the west, Sekondi-Takoradi to be precise. Currently, he represents the old guard of Ghanaian music. In performing his duties as a vanguard of original Ghanaian music, Ambolley brought his classics to Nitro, The Live Sessions. This old Gee in live music kept the young ones honest with stellar performances of his own, “Onam Dadzie”, the original version of “Abrantie Cigarette Si Ma No” and others. He agrees with Kuulpeeps that young artistes prove their worth when they perform live on stage. 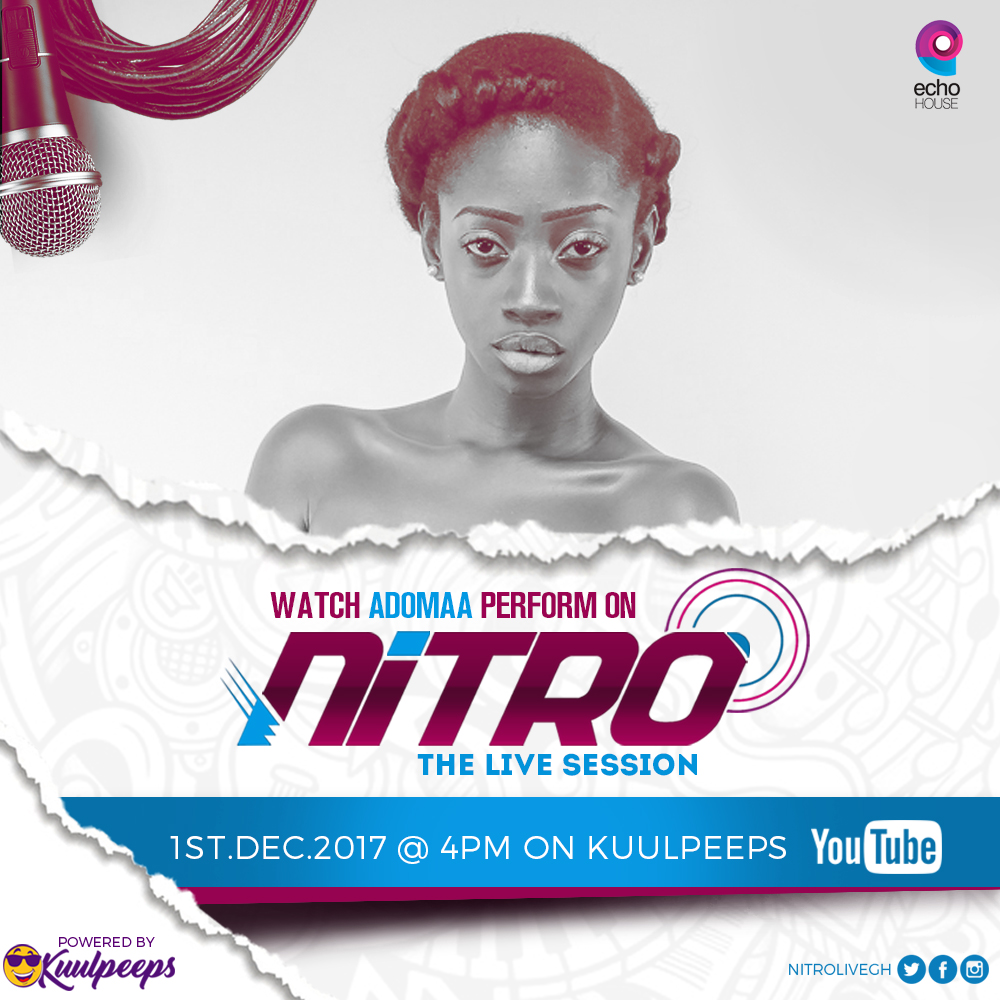 She is the epitome of the saying big things come in small packages. Adomaa was born to sing live on stage. She gets into the character of the song she is singing and uses the mood she is trying to convey to appeal to the aesthetic sensibilities of her audience in a way very few musicians like Efya, Jenifer Hudson and others are able to achieve. Her mash-up of Sarkodie and Castro’s “Adonai” with Stonebwoy’s “Baafira” is pure music magic. Her ability to infuse this hiplife song with a dancehall song and make a beautiful soul music out of it is not a talent one sees every day. She was a delight to watch when we recorded Nitro, The Live Session and it’s just an honour that we get to share that with you. 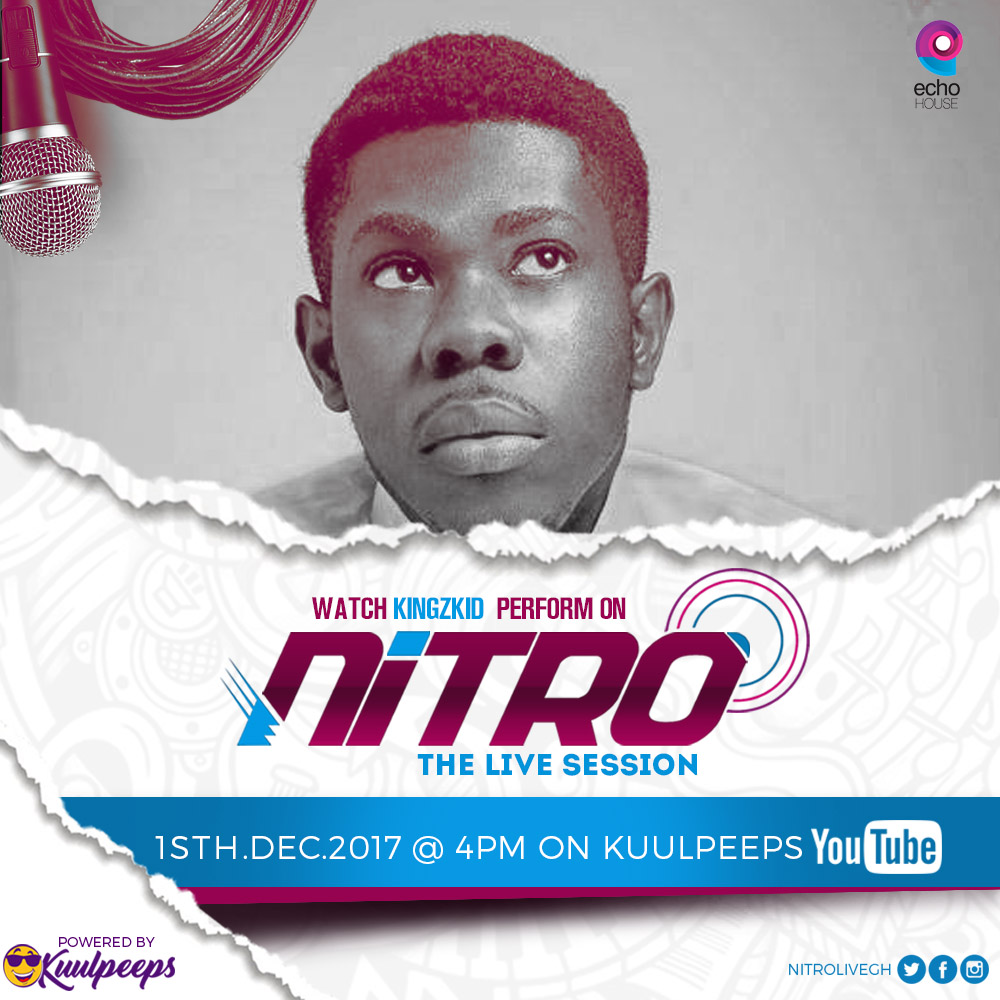 He’s the only gospel artiste on Nitro, The Live Session and he killed it! All he had to do was give thanks and praises to his maker in a way we all do in church. His music has that hip-hop touch that will make you wanna jump and praise God. 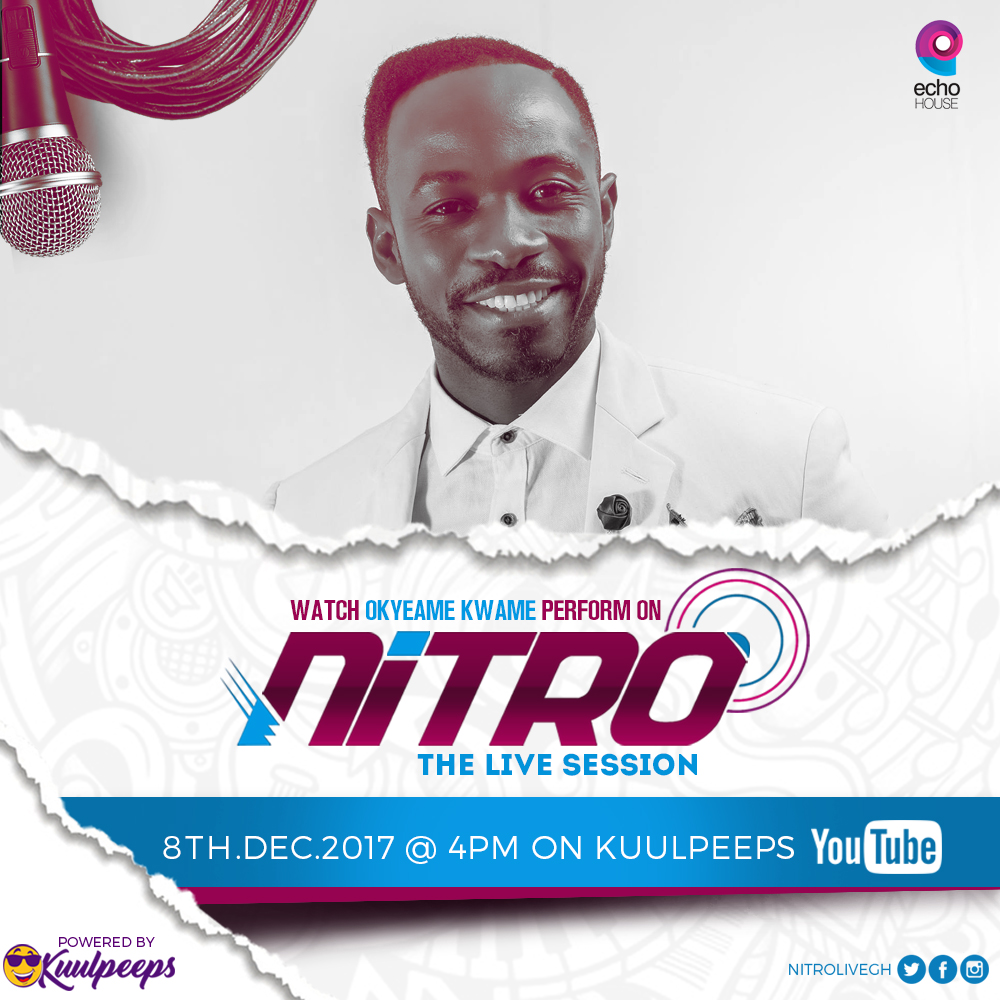 Are you feeling sick out of boredom? All you have to do is listen to some few lines from the ‘Rap Doctor’ and you’ll be fine. Okyeame Kwame believes music is what you make it be. He was so emotional during the performance that he cried at some point. At Nitro, The Live Session Okyeame Kwame performed some of his hit songs including ‘Anaa.’ 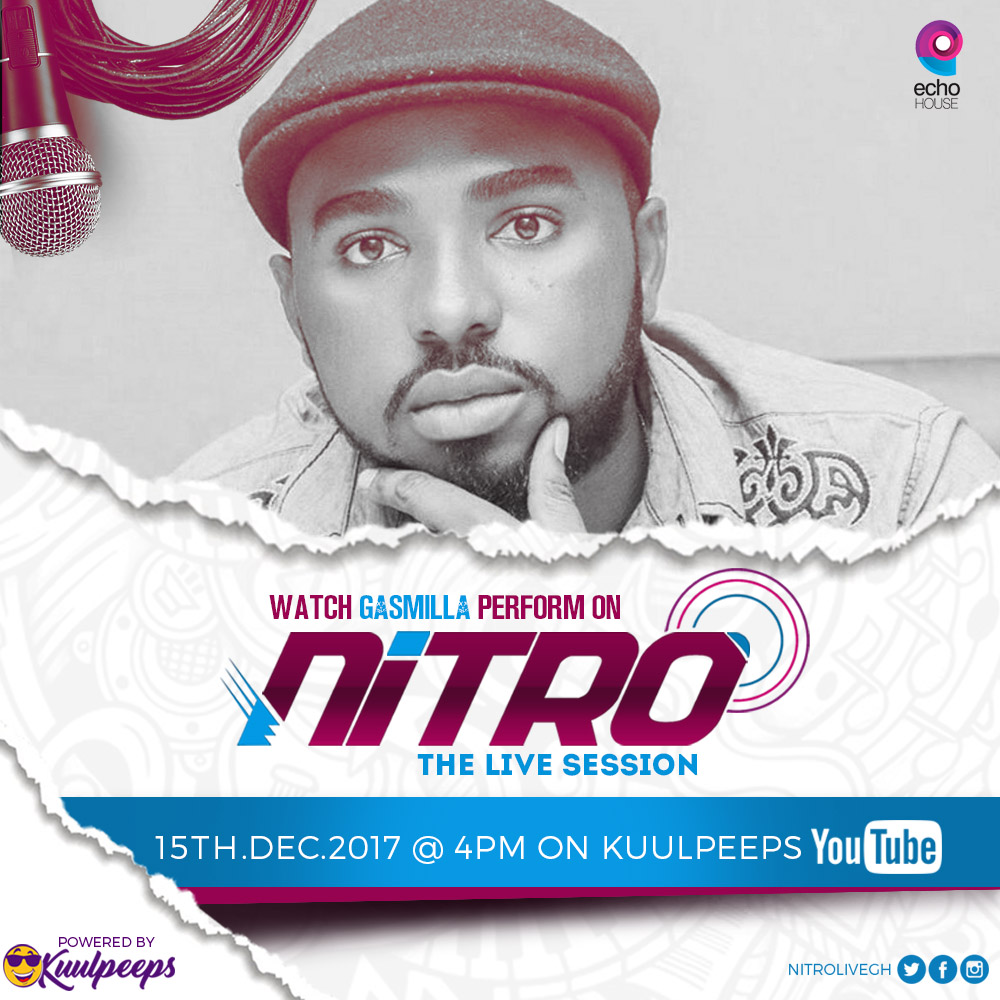 The mention of this dude’s name will make you wanna dance, and that’s exactly what happened on Gasmila’s session. He even had a freestyle that got everyone shouting. You don’t have to be a Ga to love his music, all you have to do is dance! 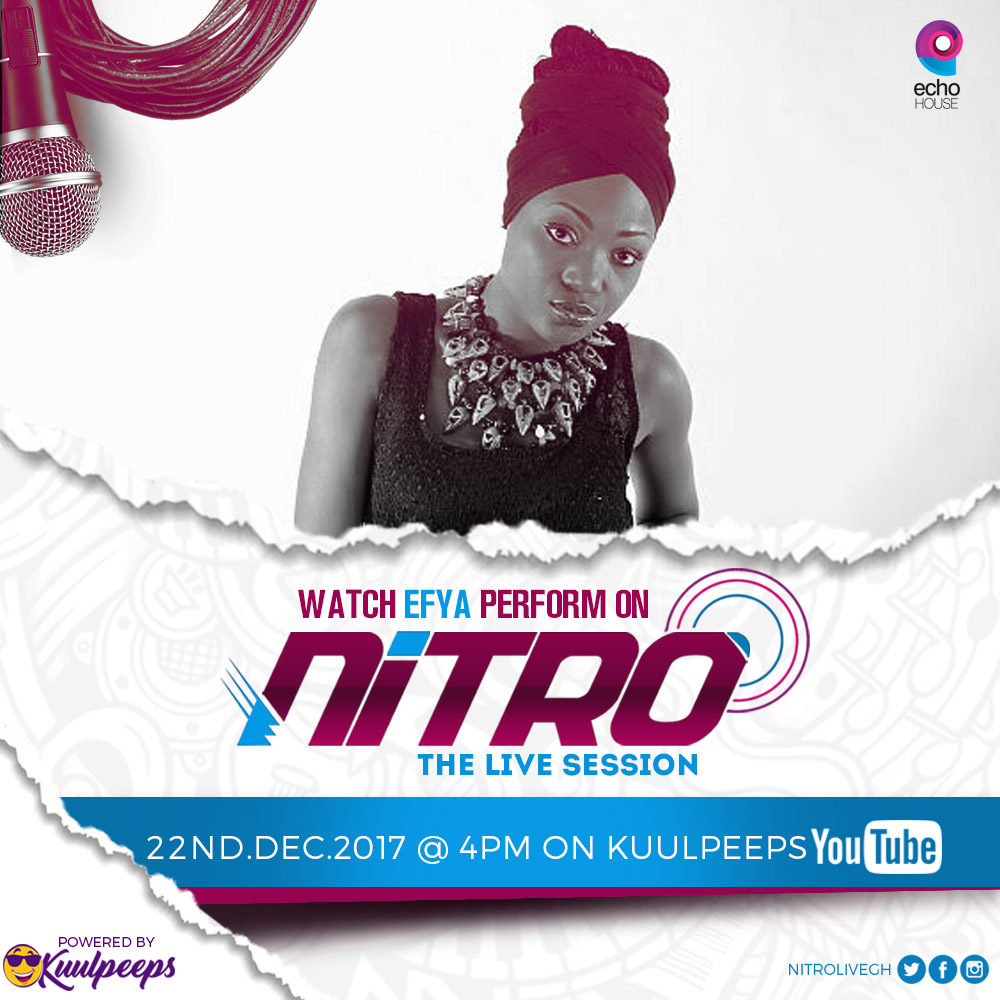 We all know that when it comes to the live session music in Ghana, Efya is one of the best. In her episode, Efya revealed that her genre of music is called the Efya Music, because she loves to do a lot of things that are mixed. She performed songs like ‘Life’ and ‘I Try’ which blew the crowd away. 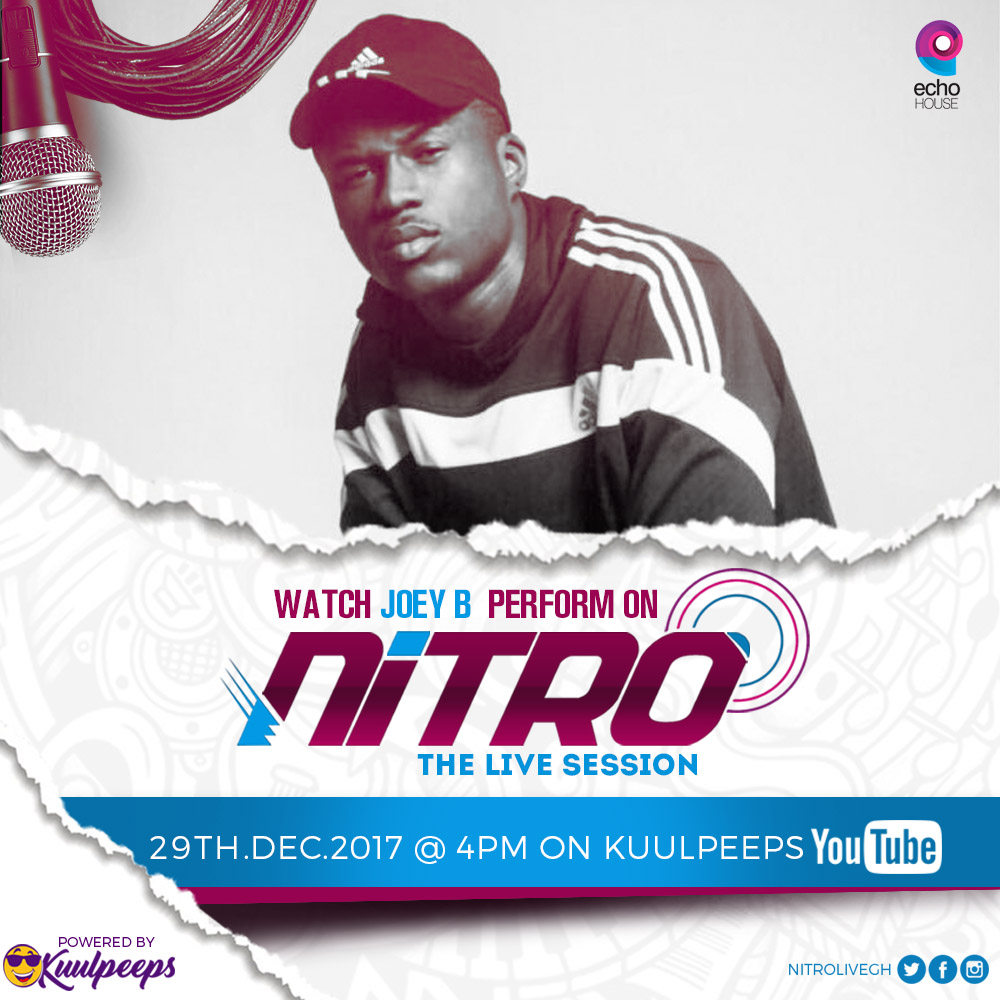 Joey B also picked up his highlife talent while performing at The Live Session. With inspiration from the legend, Gyedu Blay Ambolley, Joey B’s live performance was an ode to Ghana’s musical past and a foretaste of what is to come. Known for his rap songs “Otoolege Featuring EL and Pappy Kojo and U x Me among others, Joey B performed Ambolley’s “Abrantie Cigarette Si Ma No” with the infusion of rap with hip life beats. He performed the Azonto beat song, Tonga with an entirely new rhythm. You must watch Nitro, The Live Session to appreciate how Joey B was able to turn it into an equally lit highlife track. 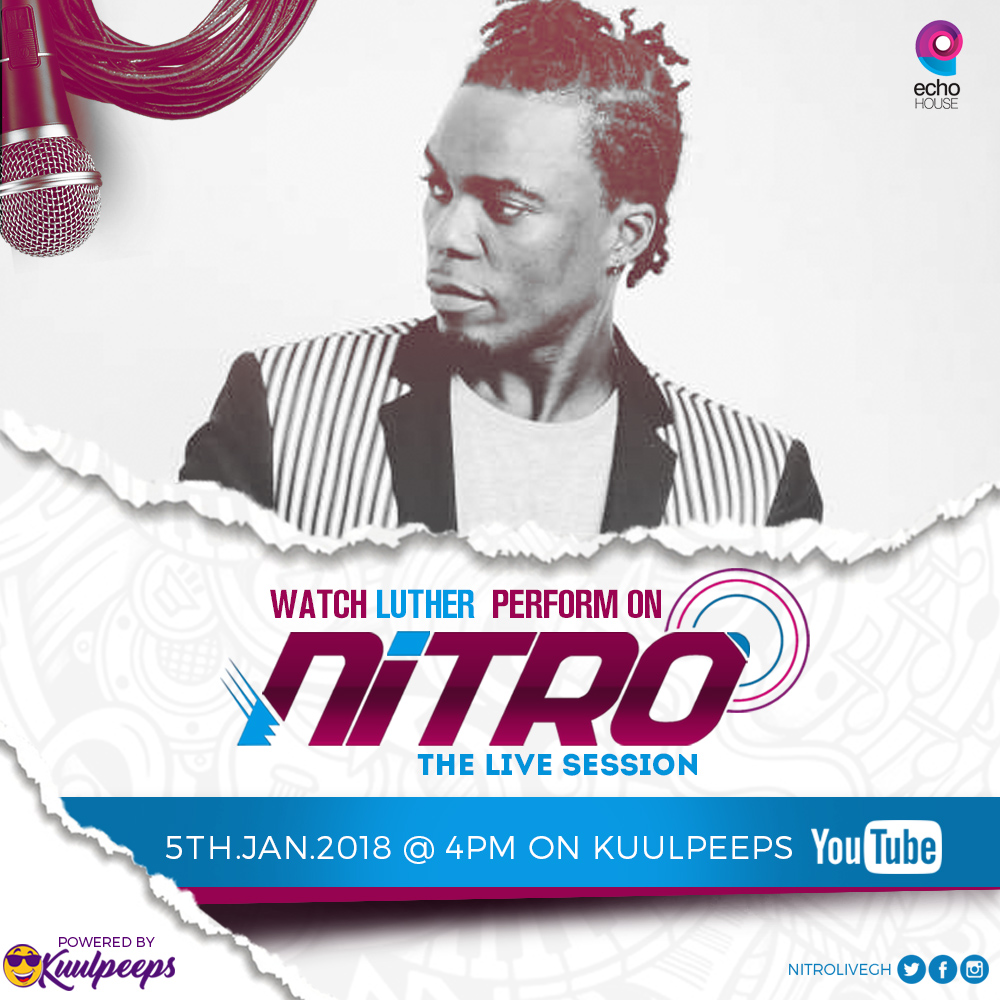 As we all know, Luther is the King of the new generation when it comes to Ga music. Luther enjoyed his time on stage while he was performing songs like ‘Solemo’ and did a couple of covers. This was his first time performing live on stage and he stated that the creativity in him was brought out. For him, three things lead to success: hard work, determination and believing in one’s self. 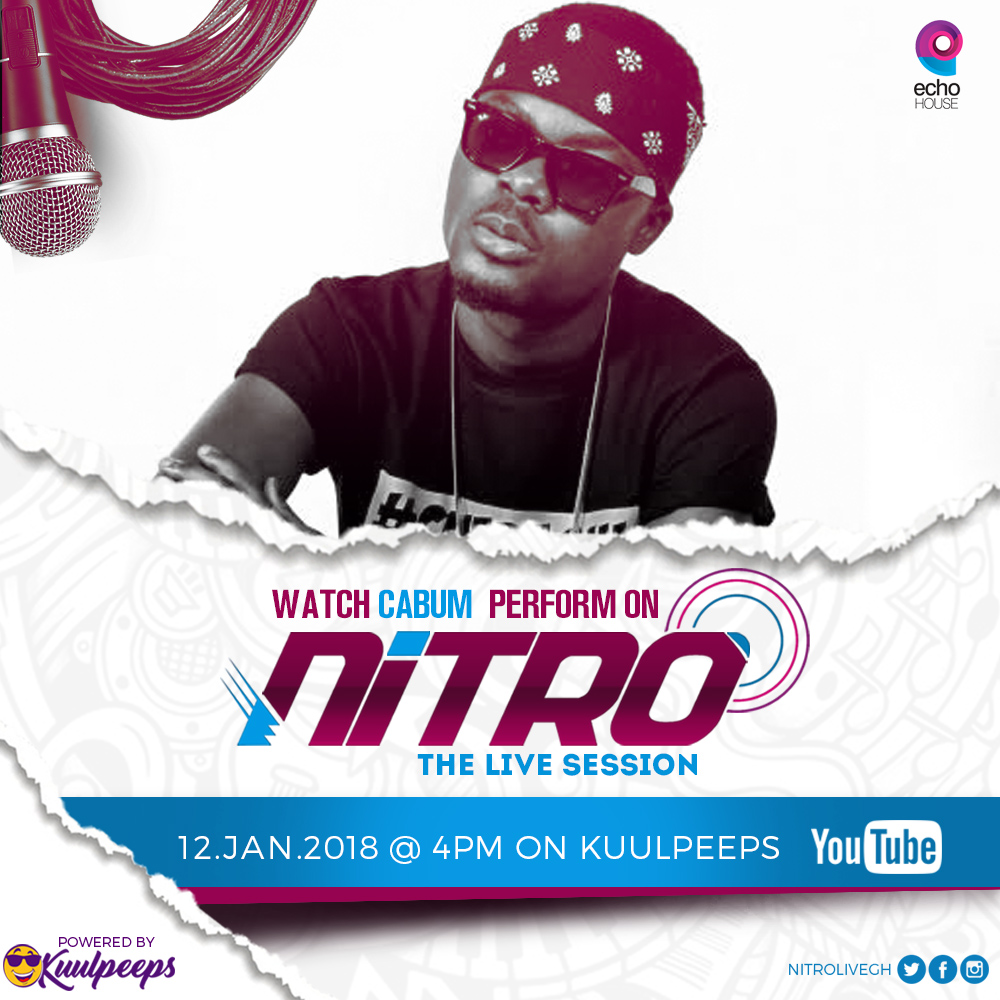 Coming from a family with a sound musical background, Kabum has been a very lively sensation after his appearance in the music industry. He believes the nation is going far, in terms of music and his performance on Nitro, The Live Session is one you can’t miss. 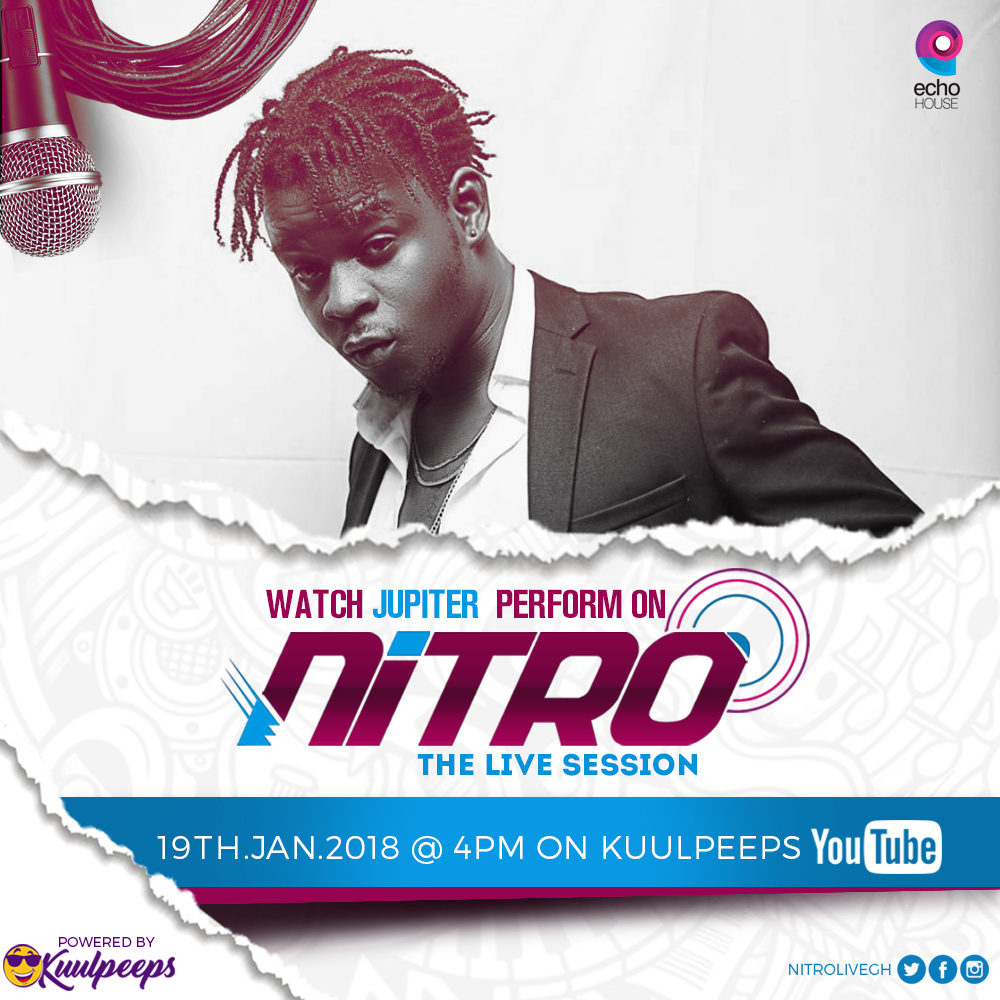 The Live Sessions wouldn’t have been complete without the Dancehall General, Jupiter’s performance. From his hit song ‘Enemy’ to ‘Why Worry,’ you’ll experience the best reggae performance you’ve ever seen. 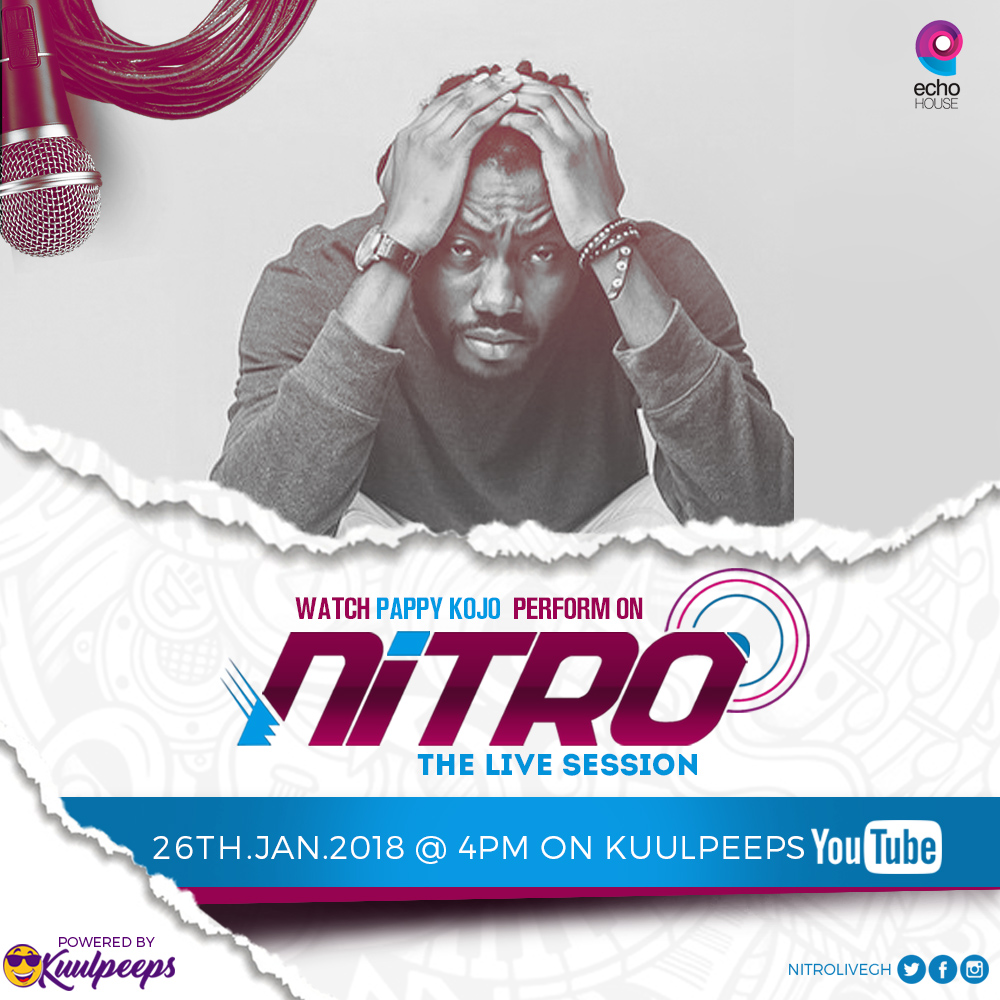 Who was guessing Pappy Kojo would be on this list. Even we couldn’t believe Pappy could have done a live session. He rocked the stage from ‘Realer No’ right to ‘Aye Late,’ Pappy Kojo turned Nitro, The Live Session into a party.

Kuulpeeps will be releasing live stage performance of these musical legends every Friday at 4 pm on the Kuulpeeps YouTube channel.

Each week we will jam to one artist and experience them perform their songs live on stage with the studio audience.

Nitro, The Live Sessions is presented to you by Echo House and powered by Kuulpeeps.