During the maiden edition of the Social Media Week Accra, one common Twitter problem was echoed by a large number of participants.

It was all about Twitter’s almighty, 140 characters limit.

See Also: This Is Why Twitter Doesn’t Have An Edit Button

Yes, all of us have been there. When we have to edit and reedit our tweets so that it fits within the 140 characters limit.

Well, if you’re one of those people who are constantly struggling to downsize your tweet length, then Twitter has a relief for you.

Yesterday, Twitter announced that it will be increasing the character limit from 140 to 280. 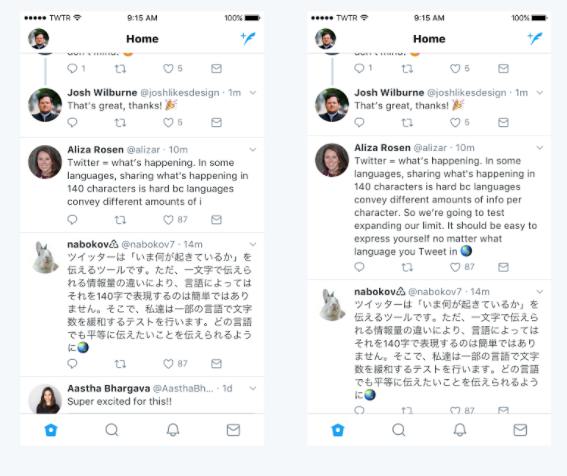 “Can’t fit your Tweet into 140 characters? We’re trying something new with a small group, and increasing the character limit to 280! Excited about the possibilities? Read our blog to find out how it all adds up, ” Twitter said in a tweet.

According to Twitter’s research, a lot more characters are used to express opinions in English than in Japanese, Korean, and Chinese.

For this reason, people tweeting in English will get 140 characters more.

For those who are looking for 1000 characters and 1,500 characters, that won’t be happening anytime soon, or it probably never will.

“Twitter is about brevity. It’s what makes it such a great way to see what’s happening. Tweets get right to the point with the information or thoughts that matter. That is something we will never change.”

Guys, we know there are strong attachments to the 140 characters.

What do you think? Do you want a 280-character limit Twitter? Do you guys think Twitter will change its position on the edit button?

ABOUT US
This is the official website for Ghana's no.1 campus portal & your guide to young people. We've got the best in the latest campus info, lifestyle, entertainment, shows, events, sports, news & more.
Contact us: sales[email protected], For Stories & Blogs: [email protected]
FOLLOW US
© 2022 © Kuulpeeps
Kuulpeeps - Ghana Campus News and Lifestyle Site by Students
This website uses cookies to improve your experience. We'll assume you're ok with this, but you can opt-out if you wish. Cookie settingsACCEPT
Privacy & Cookies Policy