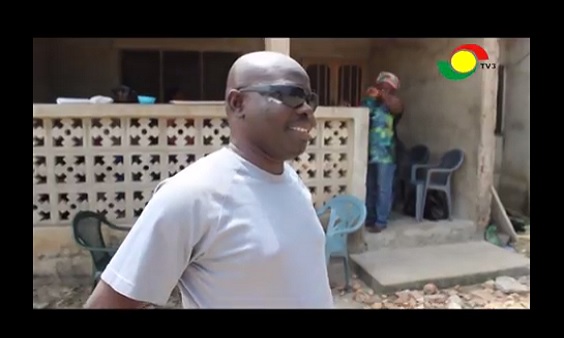 One would have expected to see Nana Boafo by the roadside, assuming a posture that elicits sympathy from passersby, with cup in hand begging for alms like most blind people do in the big cities.

No, Nana is a different ‘breed’ of his kind; a visually impaired man who has refused to live by alms.

He has chosen to live by the work of his own hands; the kind of blind men who are rare to find these days.

Nana is exemplifying the saying “disability is not inability”.

Nana Boafo was not born blind. Prior to his blindness, he was the Ankobeahene of the Anum-Asamankese Traditional Area in the West Akyem municipality of the Eastern region.

The unfortunate happened when he travelled to South Africa in June 2014.

For someone who has enjoyed the pleasure of full sight and even had a whole traditional area under his control in his capacity as a traditional ruler who commanded a lot of respect, it must have been very disheartening being plunged into perpetual darkness.

Nana recounts how it all happened. “In a dream I was walking with a friend and in the process the friend told me that Nana someone is trying to take your eyes away. Seven months later I got a shock, I was walking on the street and all of a sudden I couldn’t see,” he narrated.

Medical reports revealed that Nana was diagnosed with end stage of glaucoma.

Nana revealed his condition brought a sharp twist to his life leading to rejection, ostracism and stigma.

Nana said he had suicidal thoughts and fled his town to seek refuge in a prayer camp where he met a woman who helped him.

The woman was moved by the story of Nana so she decided to help Nana acquire skills in preparing pastries and other dishes.

Testimonies from neighbours and customers give credence to prowess in cooking.

Nana has not lost hope on regaining his sight but until then he needs support to expand his business.

“So I need oven and I need kitchen utensils to run some small restaurant so that I can lay[sic] on my own” he appealed.

With little assistance, Nana uses his senses of touch, smell, taste and hearing to perfectly execute tasks in the food making process.