Kuulpeeps – Ghana Campus News and Lifestyle Site by Students
Home POP CULTURE Events OJ Simpson Has Been Given Parole And He Will Be Freed From...
Facebook
Twitter
WhatsApp 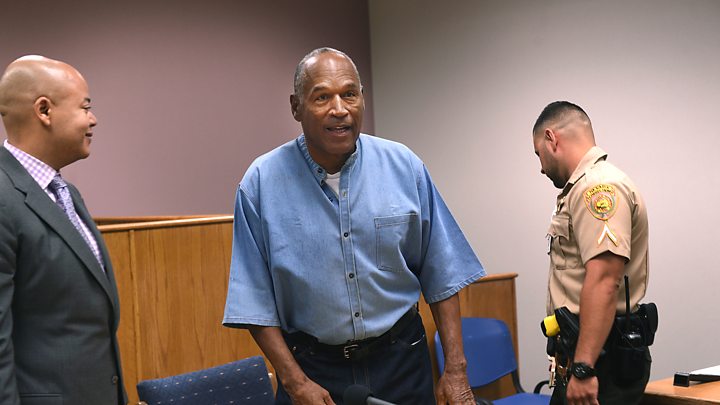 Former US football star and actor OJ Simpson has been granted parole after nine years in a Nevada prison.

“Thank you!” said the 70-year-old, bowing his head as the board approved him for release in October.

Simpson is serving time for armed robbery, assault with a deadly weapon and 10 other charges over a 2007 confrontation at a Las Vegas hotel.

He was acquitted in 1995 of the murders a year earlier of ex-wife Nicole Brown Simpson and her friend Ron Goldman.

The former Hall of Fame running back was found guilty in 2008 of the botched Las Vegas robbery – exactly 13 years to the day after he was sensationally cleared in the so-called trial of the century.

He and a group of five others stormed into a hotel room to confront two sports-memorabilia collectors and seize items that he claimed belonged to him from his career.

The hour-long hearing for Prisoner 1027820 took place at the Lovelock Correctional Facility, a medium-security prison in the Nevada desert.

Simpson told parole officials on Thursday the objects he took from the Las Vegas hotel room were later ruled by officials to legally belong to him.

“I’ve spent a conflict-free life,” the prisoner said during the hour-long hearing.

However, in 1989 Simpson admitted spousal abuse after police responded to a domestic violence call at his home.

According to police records, his wife had run from the house screaming to officers: “He’s going to kill me!”

More than two decades after the murders, the slow-speed car chase through the streets of Los Angeles and his sensational acquittal, OJ Simpson still commands an audience.

Television networks across the US interrupted their regular broadcasting to cut to the drab setting of the Lovelock Correctional Center in the high desert of Nevada.

And there he was, now 70 years old and dressed in simple blue prison garb but still instantly recognisable – the man who was a sensation from the moment he burst on to the American football field.