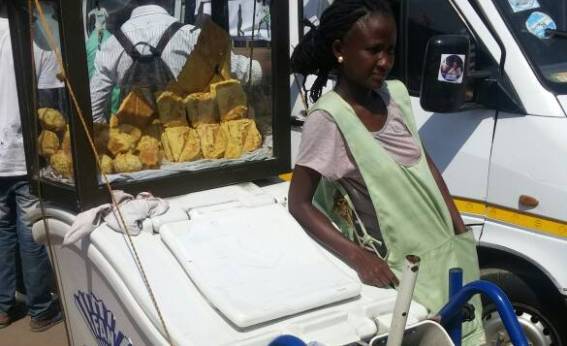 Call it determination, drive for success against all odds, Cynthia wants to live a fulfilled life.

26-year-old Cynthia Asamoah is an SHS leaver who aspires to be a nurse.

“My brother was already into this business, so after I completed school, I had nothing to do, until one day when he suggested that I join him.

I was reluctant in the beginning because of the stigma that might come with it”.

You will usually spot Cynthia at the Kwame Nkrumah Interchange in her apron sitting by her branded trolley.

Defying the odds, Cynthia’s priority is to serve her customers with chilled ice cream accompanied with meat pie or rock buns. She tells me what her normal day looks like: “I wake up very early, so I can get the products from the depot. I used to come to Circle early but because of the taskforce I wait till around midday.  I spend my entire day here and leave very late around 10pm, when my brother is back from hawking his”.

Cynthia says she is able to save some of her profit in order to get ready for school.

“The business is lucrative. Selling only the ice cream doesn’t give you a lot of profit, so you need to add the pie and the rock buns. I am able to eat and save some for the future”.

Just like any venture, Cynthia has challenges. “The first red light is my gender. I get a lot of people saying why will a woman be doing this job. Why are you competing with us and sometimes it can get very uncomfortable”. When I was starting, money was a problem because at the depot because I was a woman, I had to go through a lot of processes before I was given the trolley and I also had to pay a lot to win their trust that I won’t bolt with the trolley and the sieve”.

Cynthia has dreams of one day becoming a nurse. Her ice-cream business is supposed to raise some money for her education.

“I am saving to buy the nursing forms next year and also get myself ready for school. I want to be a nurse, so I can help save people’s lives”. Cynthia is optimistic, and until that dream of becoming a nurse is achieved, she will keep selling ice cream and saving until she gets there.