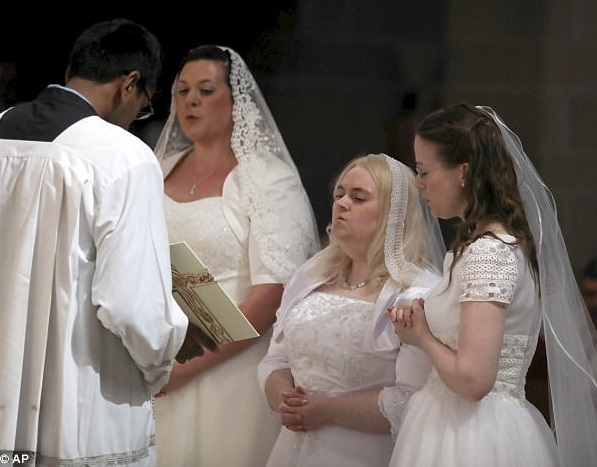 Three women were ‘married to Jesus’ and made promises of lifelong chastity, becoming the first consecrated virgins in the Archdiocese of Detroit.

Laurie Malashanko, 41, Karen Ervin, 42, and Theresa Jordan, 40, all wore white dresses, received rings and said vows at the ceremony at the Cathedral of the Most Blessed Sacrament in Detroit, Michigan.

The three women are not nuns and have not joined a religious order. They will continue to work regular jobs and support themselves financially.

Their vows are a commitment to chastity and to give themselves fully to Christ. According to Catholic canon law, they are now ‘mystically betrothed to Christ’.

‘I felt like it was an opportunity to take my relationship with Christ one step further,’ Jordan told the Detroit Free Press.

‘The focus is on how to be in the world, but not be of it, and (having) this understanding of your role as a bride of Christ, and reflecting your love of Jesus to the world,’ Ervin said.

Like any other wedding, the cathedral was full of guests and the mass began like any other Catholic mass before the consecration rite was started on June 24.

All three women carried oil lamps as they walked down the aisle and as the Litany of the Saints was recited, the brides lay prostrate.

After that, Archbishop Allen Vigneron gave each woman her ring. He put veils over their heads and gave them each a prayer book.

Then all three women sang ‘I am a spouse to Him, whom the angels serve; sun and moon stand in wonder at His glory’ and the congregation clapped for them.

‘I was very happy, very elated to be wedded to Christ,’ Jordan said. ‘I felt aligned with his virginity, his purity and all of his sufferings.

‘To be mystically espoused to him, it was very joyful.’

There are about 250 consecrated virgins in the US and 4,000 worldwide, according to Judith Stegman, the president of the United States Association of Consecrated Virgins.