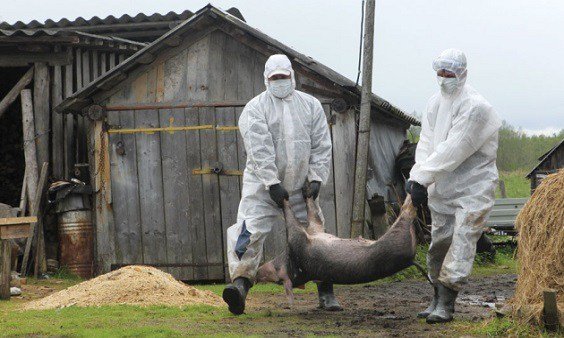 A report from the Veterinary Services Department shows that an African swine fever has hit three districts of the Ashanti Region, leading to the killing of over 400 pigs between May and June this year.

The affected communities involved are Adjaman and Amakom in the Bosomtwe District, and Tepa in the Ahafo Ano Movement and slaughtering of pigs and its products have been banned in the affected communities as a measure to control the spread of the disease which is caused by a virus.

It is characterized by a high fever hemorrhages and cyanosis in the skin, loss of appetite and a high mortality rate and there is no vaccine against the disease.

The swine fever is mainly acquired through the movement of infected animals and feeding of infected materials to pigs.

Last year, the disease hit the Ashanti Region and over 6,000 pigs were killed. This affected the pig business and the livelihood of over 21 pig farmers and their dependants.

Officials from the National Disaster Management Organisation, and the Ashanti Regional Director of the Veterinary Service Department, Dr Emmanuel Edward Effah, have inspected some pig farms in the region to assess the situation.

Chairman of the Pig Farmers Association Augustine Naah in Atwima Nwabiagya District, says last year’s outbreak had crippled their business and it has repeated itself again, therefore, he appealed to the government to come to their aid to enable them start over their business.

Dr Effah appealed to all pig farmers, livestock traders, butchers, meat processors and shop owners as well as the public to co-operate with them to help control the disease.

He called on all pig farmers in the region to report immediately if they have observed any strange disease among their pigs to the nearest office of the Ministry of Food and Agric in their area.